The same day I started reading The Girls, I heard that Charles Manson, age 82, had been taken from his jail cell to the hospital. A fitting coincidence of timing, as the actions of a Manson-like cult form the backdrop of Emma Cline’s unsettling coming-of-age novel.

While The Girls, set in California the late 1960s, makes free use of the Manson family backstory, its main narrative is an examination of female adolescent angst and yearning, a time when you “reared and sulked against the bonds of parents and school and age, the things that kept you from the certain happiness that awaited.” 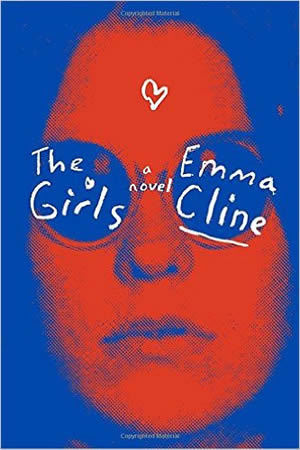 The aloneness of Evie Boyd, 14, during the “endless, formless” summer of 1969 — ignored by her recently divorced parents, growing distant from her long-time best friend and petulant about her upcoming move to a boarding school — fits with the articles that taught her “life was really just a waiting room until someone noticed you.” It is not, however, someone who notices her but someone she notices that sets Evie on her hazardous journey to adulthood, as she reaches for acceptance and love, innocent of the menace entangled within.

The someone who captures Evie’s attention as she sits on a park bench is the seemingly carefree Suzanne, the confident girl with the black hair, the apparent leader of a group of girls “sleek and thoughtless as sharks breaching the water.” Later, when Evie’s bike breaks down on a back road, the girls in their black bus stop and offer her a ride to their ranch. There the desolate teen meets Russell, the true leader of the girls, the charismatic man venerated by them as much as Suzanne is revered by Evie.

As Evie spends more and more time at the farm, happy to be accepted there, excited to be in Suzanne’s company, she prefers not to think too deeply about the surrounding smell of rot and decay, the pliable standards of behavior, the uneasy ease with which she participates in minor crimes, and the sex that is considered just “another working of the human body,” although Evie struggles over that blasé attitude. And on one particular night, a night when Evie, her raw need to belong still paramount, begs to join Suzanne and a small group that’s headed out on some sort of secret mission, the world as she knows it is about to suffer the danger she overlooked.

The Girls is bookended by the adult Evie, middle-aged, unanchored, looking back at who she was, at what she might have done, at how for her there is no real escaping the past.

Those who expect The Girls to be a literary version of Helter Skelter: The True Story of the Manson Murders, a new, fictional take offering insight into the evil darkness of Charles Manson and his devoted, lethal adherents, will not find that here. And they might be disappointed. In her novel, Cline instead is using the Manson story to draw parallels to the precarious nature of the female teen years, to point out that the combination of innocence and need can have unforeseen consequences.

Although at times a bit overwritten, for Cline does love her similes and metaphors, this account of the dangers of desire and want, of ignoring reality because it is not what you want it to be, of believing that one’s love is always equally matched kept my attention throughout, because the borrowed terror of the actual Mason clan’s killing spree, a looming threat always present, is what keeps the adult Evie awake at night and is what kept me enthralled.