Full disclosure: I love clothes and I love looking at beautifully dressed people and I dream of a world in which no one wears pajama pants in public.

I grew up in a home where my mother stressed classics over fads, quality over quantity. She also frequently issued clothing edicts, particularly during my teen years: “Susan, those jeans are inappropriate for church.” Or “We’re going to your cousin’s wedding, Susan, not a saloon — go change into that crepe de chine dress.” 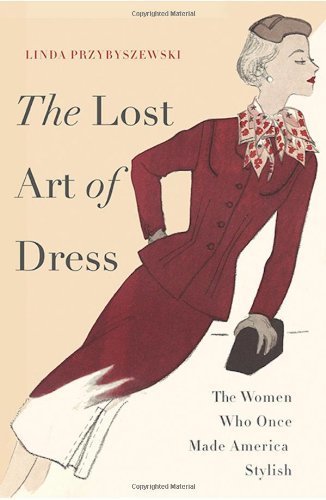 Besides being really annoyed by her dressing decrees — what 17-year-old even knows what crepe de chine is? — I also assumed these directives were part of that mystical body of knowledge that every mother had and used solely to annoy teenage daughters. It wasn’t until years later that I recognized my mother’s sartorial suggestions were actually rooted in timeless fashion principles.

So reading The Lost Art of Dress: The Women Who Once Made America Stylish, by Notre Dame Professor of History Linda Przybyszewski (who also is an expert dressmaker), felt at once both familiar and enlightening.

In the book, Przybyszewski contextualizes the rules that govern (what my mother used to term “appropriate”) dressing by introducing readers to “The Dress Doctors” — “a remarkable group of women who worked as teachers, writers, retailers, and designers” and who, during the first half of the 20th century, offered advice to American women on how to dress.

But these Dress Doctors were so much more than today’s snarky fashion critics who mock rather than teach. The Dress Doctors were able to reach women of all classes across the nation through Home Economics departments, which were once ubiquitous components of our education system. The classes taught young women about design and fabric, stressing that a woman didn’t have to be wealthy to dress beautifully. In fact, frugality and practicality were prized by the Dress Doctors. And since most women actually knew how to sew their own clothing back then, they were able to follow the Dress Doctors’ design principles — harmony, proportion, balance, rhythm, emphasis — and create clothing that flattered their body type and suited the occasion.

One of my favorite nuggets of info was that the Dress Doctors established six occasions for dress: school, business, housework, sport, afternoon and evening — each with its own set of guidelines for optimal efficiency, elegance and style.

So a note to lady wearing pajamas to the grocery store: “Sleep” is not one of the Dress Doctors occasions for dress.

Susan M. Guibert is executive director of Media Relations and Communications at The University of Chicago Booth School of Business. She is the co-author of three children’s books, including The Spirit of Christmas at Notre Dame.