Years ago, when I was supervising some news reporters, I handed one of our writers $20. His assignment: Find a beggar in downtown South Bend, buy him lunch and interview him. Find out the exact moment when the guy’s life went down the toilet.

I had done a wide variety of writing by then. I knew there was a moment of truth in almost every congressional election, football game and personal story I had covered. If someone had done just one thing differently, the loss might have become a win, or a failure a success.

I was a jerk to think that way. Because my life was fine, I figured you had messed up somehow if yours wasn’t.

My $20 investment didn’t yield the story I wanted. I’m not sure how hard the reporter tried, and I wouldn’t blame him if he simply divided the money among the lost souls wandering the downtown. But that assignment haunts me these days, in part because of my new favorite author, Willy Vlautin. 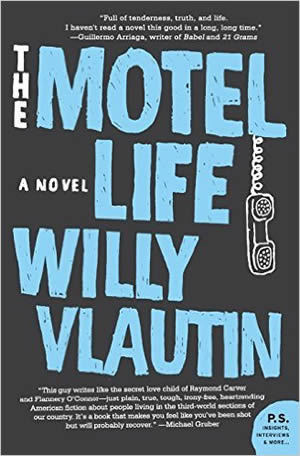 If you’re not familiar with him, you’re at the stage I was a year ago. You may hear more about him soon because the planned 2017 movie based on his 2010 novel, Lean on Pete, is expected to be a major hit.

Vlautin’s four books — The Motel Life, The Free, Northline and Lean on Pete — all explore what I would call the permanent underclass. His characters generally are young. They don’t have dreams in the way you and I define them. Instead, they have missions. Their energies are devoted to getting themselves out of immediate jams and away from pain.

We have met characters like these before. Robert Frost gave us a whiff in his “The Death of the Hired Man” in 1914. John Steinbeck wrote about them by the truckloads, most famously in his 1939 The Grapes of Wrath. In that book, Ma and Pa Joad were forced into desperation by a drought that had ruined thousands of family farms.

More than 70 years later, Vlautin’s characters still are scratching and clawing in a ruined world. The landscapes may be near some of America’s most lush and beautiful, but we are left outside the borders. The Joads’ Dust Bowl now is internal. It is our soul.

In Vlautin’s The Motel Life, brothers Frank and Jerry Lee live in fleabag lodging in Reno, Nevada. One night, in a blinding snowstorm, a boy is killed when he rides his bike into the path of a car driven by Jerry Lee. For Jerry Lee, the boy’s death is too much to handle. His own life is meaningless, and he is haunted by the thought that this boy actually could have meant something to somebody.

Jerry Lee’s attempt at suicide fails when he shoots himself in the leg, just adding to the misery.

Later, Frank makes a $5,720 windfall by betting everything he has on Evander Holyfield, a huge underdog in a heavyweight championship fight against Mike Tyson. That kind of money, you would think, could rescue people like Frank and Jerry Lee. It doesn’t. Poverty isn’t always just about money.

I’m a sucker for strong beginnings. With Frank as the narrator, this is how the book starts: “The night it happened I was drunk, almost passed out, and I swear to God a bird came flying through my motel room window. . . . It would have scared me to death if I hadn’t been so drunk. All I could do was get up, turn on the light, and throw it back out the window.”

The ending, equally illuminating, is something you’ll want to find for yourself. It rivals my all-time favorite, the closing lines of F. Scott Fitzgerald’s The Great Gatsby.

Vlautin’s writing is always crisp. In real life, we might turn away from his characters, but we grow to love them here because we begin to understand them. (Unfortunately, the 2013 movie based on The Motel Life was not well-loved.)

And to answer my $20 question, there is no moment of truth where their choices exempt them from the good life. These are people who, by the time they hit their teens, already are down 49-0 with a quarterback who either has quit the team, is on drugs or has been colluding with the opposition. Still, almost nobly, they line up for the next play.

They aren’t sad like Jay Gatsby, filled with wealth and power, yearning and dying for lost love. Vlautin’s people are America’s shadow dwellers, foraging in vain for hope and dignity. A lost love? The least of their worries.