Many of us have that friend who recommends the best books to read. My friend’s name is Emma, and whenever she tells me to read something, I do it.

Emma is not the kind of person to have a favorite book. She reads so much and loves so many books that it’s impossible for her to choose. But a few years back, when Emma and I were catching up, she told me that she had finally found a favorite: the fantasy novel The Name of the Wind.

I was stunned. I’d known Emma for almost my entire life and I’d never heard her proclaim a favorite before. So I moved the book to the top of my reading list and ordered it from the library. 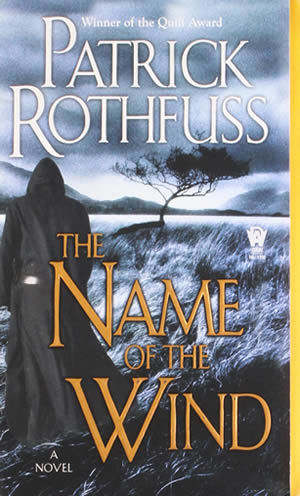 When I got it, I literally did not put it down, except to eat meals. It was that good. It’s now one of my all-time favorites, a book I’ve returned to many times.

There are a lot of reasons for this. First and foremost is the writing.

Rothfuss is the best writer I have come across in a long time. Not the best fantasy writer, the best writer — period. His greatest strength lies in his ability to describe emotions as if they were physical, tangible things.

But Rothfuss is also a master storyteller. The beginning of the novel is written in third-person, from the perspective of a bard searching for the true story of the lost hero Kvothe (pronounced “quothe”) and his adventures. Through the bard’s eyes, the reader sees that times are hard in the war-torn kingdom and evil things are stirring in the dark.

From the bard, the reader also learns a little of Kvothe and his many names. How he is called Kvothe the Bloodless, Kvothe the Arcane and Kvothe Kingkiller. Also Kvothe the Flame, the Thunder, the Broken Tree.

But the bard cannot tell the reader how Kvothe earned those names. Only Kvothe himself can do that.

Thus the bard’s story becomes a frame tale, setting the stage and returned to in short interludes throughout the narrative to offer some background. The rest is told in first-person flashback, as Kvothe reveals his life to the reader piece by piece. Rothfuss tantalizes the reader with shocking hints about Kvothe’s life in the bard’s sections, but every new detail only leads to more questions.

If you’re looking for something good to read, I highly recommend picking up a copy of this book. I know a lot of people don’t like to read fantasy novels, but I think that’s a mistake. Some of the most vibrant, complex and diverse characters come from fantasy novels, as well as some of the greatest stories. All I can ask is that you give this book, and this genre, a chance.

And if you don’t like it, then no harm done. I, for one, have never regretted reading a book, even one I didn’t like.

The Name of the Wind is the first book in the Kingkiller Chronicle trilogy. The second book, The Wise Man’s Fear, is already out, as is a companion novella called The Slow Regard of Silent Things. (As a side note, Slow Regard is one of the most beautiful books I’ve ever read.)

I eagerly await the third and final book. A lot of the time, it’s easy to predict how a series will end. I’m happy to say that I have no idea how Rothfuss will draw this particular story to a close.

But I can’t wait to find out.