I’d been hunting for a new fantasy author to read for a while when I came across the name Brent Weeks. He’s relatively new on the scene, with only one completed series and another halfway done. So I set about getting a copy of his finished The Night Angel Trilogy to see if I could add another author to my list of all-time favorites.

Turns out, Brent Weeks is a pretty good writer. He’s got a wicked sense of humor and a talent for crafting lovable rogues. To give you a sense of where Weeks falls on the spectrum, I’d say his writing is not as dark nor as complex as George R.R. Martin’s in A Song of Ice and Fire, but it avoids the sweeping morality of high fantasy works such as The Lord of the Rings. By this I mean that there is a lighter tone of hope and friendship overall to the series, but you’ve got to get through some blood and gore and darkness to get there. Furthermore, I wouldn’t say Weeks is the best new fantasy author I’ve come across — Patrick Rothfuss still takes that prize — but he has a knack for creating intriguing worlds, fast-moving plots and fascinating characters. I’ll admit that I raced through the The Night Angel Trilogy, eager to discover where the story was headed. 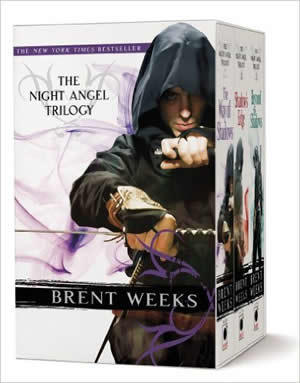 The series follows several characters, but the true protagonist is Azoth, an orphan boy fighting for survival on the streets of Cenaria City. He is reluctantly taken as an apprentice by the city’s most feared assassin, Durzo Blint. Blint gives his apprentice a new identity and a new name: Kylar Stern.

Through Blint’s training, Kylar finds himself delving deep into the world of shadows. His work as an assassin benefits the shady dealings of the city’s crime bosses. But in the daylight, Kylar poses as a noble and befriends Logan Gyre, heir to the most powerful family in the land. Kylar knows there will be a day when his ties to the underworld will destroy his friendship with Logan. He just hopes he will never be ordered to take Logan’s life.

Yet strangest and most troubling of all, Kylar stumbles upon the secret of an ancient magic. A magic sought by the most fearsome and terrible man Kylar has ever met. A magic that could make Kylar into a creature of legend — at the cost of everyone he loves.

The series traces Kylar’s adventures through all three books: The Way of Shadows, Shadow’s Edge and Beyond the Shadows. There were enough characters to follow and enough complexity in the plot that I couldn’t immediately guess where the action was headed. Weeks likes throwing surprises at his readers and seems to delight in putting each of his characters through the crucible to find out exactly what they’re made of.

Now I said that Weeks was a pretty good writer and not a great one for a reason. As much as I enjoyed the The Night Angel Trilogy (and I really did enjoy it), parts of the plot seemed weaker than others. By Weeks’ own admission, he had to cut a decent amount of material from the books during the editing process. Perhaps some of the exposition I was looking for ended up among those lost pages. Even so, the book’s action is so fast-paced and exciting that it’s easy to forgive the series’ minor shortcomings.

I’m looking forward to reading the final two books of Weeks’ Lightbringer series, which is set in an entirely different universe than the The Night Angel Trilogy, and I’m interested to see what other worlds Weeks will bring to light in the future.