Our house is littered with literature. The coffee table is strewn with magazines — from Taste of Home to Sports Illustrated. The kitchen table has a Bible and an accompanying seven-week study, while the countertop is covered in creased-open cookbooks. My bedside table is stacked high with autobiographies, fiction and lofty bucket-list reads. And we have an entire closet full of boxed up books. But rarely does a work ensnare me, compel me to push everything else aside and focus on it and it alone.

The Nightingale by Kristin Hannah was an exception. 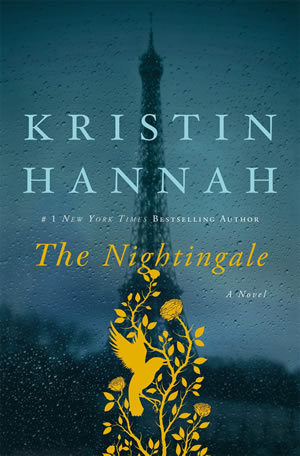 The book is set in France in 1939, as the war threatens the well-being of sisters Vianne and Isabelle. But as the Nazis march closer, the two set off down dramatically different paths in an attempt to protect the life and land they love. Isabelle, young, naïve and hot-tempered, is quickly convinced to join the French Resistance. Older sister Vianne, a mother with her husband away at war, sees Isabelle’s behavior as foolish and dangerous. When a Nazi decides to lodge with her and her young daughter, Vianne quietly obliges, scared of what would happen if she were to say no. But in time Vianne realizes that being quiet is just as dangerous as being brazen and detachment can be as deadly as disobedience.

“She knew now that no one could be neutral — not anymore — and as afraid as she was of risking Sophie’s life, she was suddenly more afraid of letting her daughter grow up in a world where good people did nothing to stop evil, where a good woman could turn her back on a friend in need.”

I’ve read a number of World War II and Holocaust books, but rarely have I read about, or even pondered, what it would be like to sit by and watch your town, your neighbors fall into evil hands. I’d like to think I’d act courageously, would do what was right, but would I? Would I be willing to sacrifice myself to save another? In the first chapter, as one of the sisters, now an elderly woman, reflects on the war, she says, “In love we find out who we want to be; in war we find out who we are.”

It may be powerful lines like that that earned this book an impressive 4.8 out of five star average review by 25,000 Amazon reviewers as of late June. I’ll admit, there are some cliché lines, occasionally some strained dialogue, but the book was also one I couldn’t wait to return to each evening.

Undeniably, part of that attraction was that it reminded me of my time in Angers as an undergraduate. While there, many of us Notre Dame students took a class on the playwright Moliere. One of the class requirements was to visit the local nursing home each week and read to the residents from our assignments. After a few weeks they grew tired of listening to us fumble over the reading. Instead, they told us, they wanted to tell their own stories.

I listened as one woman recounted her own memories of the war, stories of the Nazis taking over quaint Angers. At the time, the madame’s father owned one of the local bakeries. Each morning he would rise early to make bread, and as soon as he opened, or sometimes even before, the Nazis would come in and take their pick of his goods, leaving the shelves empty. Even the local baker, the woman recounted, didn’t have enough to feed his family.

I think I saw the madame I used to visit in the pages of this book, especially since the narrator is one of the sisters looking back on her life. But which sister isn’t revealed until the end. A mystery that once solved will leave you weeping into the book’s final pages.

Tara Hunt McMullen is a former associate editor of this magazine. She is now a freelance writer in North Carolina.