The landscape is bleak and grim, cold, gray, ashen, desolate. It is a post-apocalyptic world. Destitute. Barren. 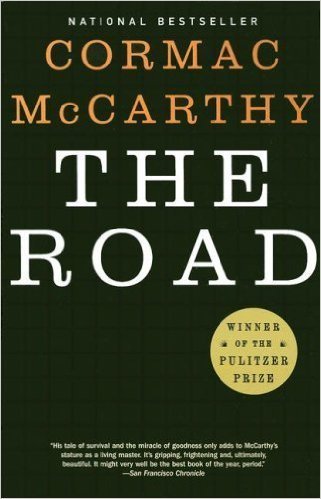 It is a world of the writer’s imagination. Although, given the forces, violence and powers of human destruction threatening the planet today, it is a world easy to conjure, to believe in, and to dread. The Road does not read like science fiction; it is stark in its realism, unblinkingly honest in its vision.

But they must move to survive, and theirs is a story of survival. Living day to day, hungry and hunting for food, hiding from roaming bandits whose fleeting intrusions and ominous presence bring palpable danger to the pair. But those encounters are rare, underscoring how close-at-hand is human extinction — and how wantonly desperate are those who remain.

Author Cormac McCarthy is one of the prominent figures of serious contemporary literature; he is no stranger to hardness of heart, the evil of men, life’s brutalities. He has also written No Country for Old Men, Blood Meridian and All the Pretty Horses, which in 1992 won both the National Book Award and the National Book Critics Circle Award. The Road — dark, austere, meat-on-the-bone — took the Pulitzer for fiction in 2007.

Plenty of artists over time have sought to create a world destroyed. There are road-warrior action-adventures and there are morality plays loaded with symbolism and social commentary on the last days of the human race.

Maybe what makes The Road so powerful is that it is none of that. There are few clues into the events that led to the world’s destruction; there is scarcely little action in the narrative. The reader accompanies a nameless man and a nameless boy traveling a grim and barren landscape; any action follows the very basic elements of their days.

It is a credit to the storyteller’s art that the daily, detailed tasks of survival become so compelling and that their stumbling upon a cellar storehouse or their sharing a can of peaches are moments of relief, if not delight, for the reader as well.

Even then, The Road is more meditation than story. And it is perhaps by removing so much and focusing so thoroughly on the book’s two characters that McCarthy creates a rare gem of unsettling authenticity and grace. Sharply put, the relationship between the father and son is tender and beautiful. The dialogue between them is masterful, yet real and spare and minimal. And it is loaded. And that relationship, set in this stark and abysmal existence, calls out fundamental themes like love and goodness and God. And fire in a dark, dark world.

As the father and son approach the coast they have been aiming for, I began to wonder about their deliverance, and how the story might end: Where might there be hope in a world so bleak? Can there possibly be a happy ending, while staying true to the course of the book?

All I’ll say is that the ending — while consistent with the book’s haunting presence — was fully satisfying, at least to me anyway. I read the final pages four times before slipping the book into the library’s return slot.