I’ve read a lot of books where the authors try to put their own spin on a fairy tale. They’re usually well-written, and it’s always fun to try to spot the big twist. But the most beautiful take on a classic tale I have ever read is Juliet Marillier’s Sevenwaters trilogy. 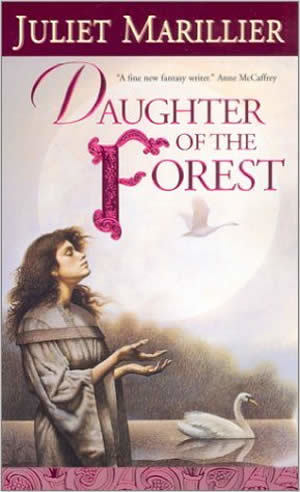 Unless you’ve read Grimms’ Fairy Tales, you may not have heard of the fable this trilogy is based on. It’s the story of a king with seven children: six sons and one daughter. One day, the king meets a beautiful woman and becomes bewitched — literally. The enchantress marries the king and decides to get rid of his sons, clearing the way for any children she herself might bear to inherit the kingdom. Instead of killing the sons, the enchantress places a spell on them, turning them into swans.

The king’s daughter, learning of her stepmother’s treachery, escapes the castle and sets out to free her brothers from the evil spell. She learns that the only way to save them is to make six shirts, spun and woven from a cloth made of starwort. Until the shirts are finished and given to her transformed brothers, the girl may not utter a single sound. And so with blood and pain, silence and sacrifice, the king’s daughter saves her brothers from the evil siren.

The first book of the series, Daughter of the Forest, is this story. Marillier sets her tale in Ireland, in a small territory called Sevenwaters, so named for the seven streams that flow through the forest. Sevenwaters is a place of magic and deep mystery, and the family that rules it has long been a protector of the old druidic faith. Sorcha and her six older brothers become the seven children from the fairy tale, and the book follows Sorcha as she struggles to free her brothers, no matter what it might cost her in return.

What makes Marillier’s tale so captivating is not just the beauty of her retelling but the way she weaves the original fairy tale into an even larger story — a story of generations, of family, of hope. In Daughter of the Forest, the reader learns of a conflict between Ireland and England over three tiny islands in the sea between the two countries. The Britons stole the islands long ago, not realizing that they were sacred ground to the Irish. By the time of the events in Daughter of the Forest, a conflict has been raging for generations between the Lord of Sevenwaters and the Britons over control of the islands. The Irish believe that one day they will reclaim what they lost, for a prophecy tells them of a child who bears the blood of the Irish and the Britons who will lead the Irish to victory.

But Daughter of the Forest gives the reader only the first part of the story. Marillier follows the conflict between the Irish and the Britons, and between the family of Sevenwaters and the enchantress, through two more generations in Son of the Shadows and Child of the Prophecy. Each book, each generation, is influenced by the actions of their predecessors, tying the trilogy and both conflicts together.

What I appreciated the most about the Sevenwaters trilogy was not Marillier’s poignant writing or even the way the story arcs so perfectly through all three books. What I truly valued was the way Marillier captured the sense of Irish tradition and storytelling, how she pays homage to a beautiful culture that many of us at Notre Dame love deeply.

The Sevenwaters trilogy is a tale of love and pain, of hope and loss and rebirth. Above all, it is a story about family and how the ones we love never truly leave us behind.