I can’t remember how I found James Rebanks on Twitter. I was probably procrastinating on some deadline, searching the Internet for a distraction. It was well over a year ago — maybe even more than two years at this point — that I followed @herdyshepherd1 and was absolutely captivated by his sweeping images of his farm in the English Lake District. 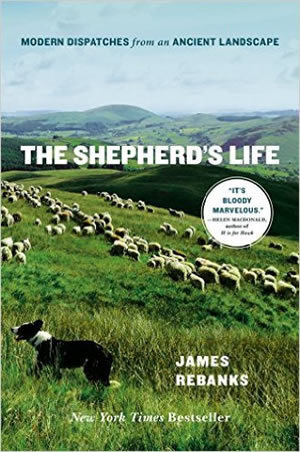 I have no reason to care about Rebanks, or his sheep, his devoted sheepdogs, his adorable children or the pastoral lands of his ancestors. Still, I’ve followed him with rapt attention, seeking out his Twitter feed and, now, his memoir on his family, his farm, his way of life. The Shepherd’s Life: Modern Dispatches from an Ancient Landscape splits the story of his life and farm in a way only a farmer would — by season.

Perhaps this is the point of the attraction. By all logical reasoning, I shouldn’t care — it’s on the other side of the world from me, with his farming practices having no daily effect on my life — but technology and global communication, as well as a (hopefully) growing emphasis on family farms, has driven me to be emotionally concerned for the welfare of his farm, as well as those of his neighbors and those like him all over the world.

Not to get too much into the meat of the text (enjoy it for yourself!), but what resonated most with me was the section on his time spent at Oxford University, while still trying his hardest to be part of the farm. What young adult doesn’t understand the struggle between home life and moving beyond it, either through higher education, a new job or a move across the country? Who doesn’t have that tiny voice at the back of their mind, calling them home to the familiar?

I’ve found that since I followed Rebanks, I care much more about who’s producing what I consume and wear. I now buy my meat exclusively from local farmers and butchers at the South Bend Farmers Market. I also buy my produce there, finding joy in using fruits and vegetables that are in season, preserving whatever my husband and I don’t use so we can enjoy it year-round. When the time came to replace my long-loved leather handbag, I searched until I found a company with fair work practices and ethically sourced leather. Yes, I had to pay a lot more for it than something from a department store, but I feel good about my choice each day I grab my bag from the side table on my way out the door.

I bet I’m not the only one who’s felt this way after reading his work or looking at his social media. He’s been dubbed “Twitter’s favorite shepherd,” a phrase I’m sure no one ever imagined before this, and has given a new 21st century perspective for the Lake District. It’s not all roses — he’s frank in his book and his tweets about how tough life can be on his farm, whether it’s losing lambs to illness, the struggle to make ends meet for family farmers, the harsh weather or dealing with the grunt work of repairing this or that around the farm.

He’s human. A recent tweet about needing to remind himself to choose less expletive-filled passages from his book, especially while doing a reading at a church, shows he’s one of us. As do the photographs of his children helping around the farm, or his dogs making funny faces while riding on the back of his quad bike.

But then he retweets a book review from The New York Times or remarks about traveling around the world or how his book will be available in many different languages soon — and you realize he’s a global presence. His presence is intimate and distant, all at once. He’s brought us to his farm and to hundreds of farms around the world like his. He’s the shepherd to us all, guiding us to a higher understanding of what it means to be human, to be caretakers of this world, each in our own little way.

If you want to read it, go buy it, but not from some online superstore. Rebanks — James, I hope he won’t mind me writing — would want you to pick it up from your local independent bookstore. It’s the little steps we can all include in our daily life that make a difference.

Amanda Gray is a reporter for The South Bend Tribune.