A proponent of the “Great Man Theory,” which holds that history can be explained by the impact of highly influential men who use their power to effect change, would find confirmation in the life of astronomer William Herschel. Herschel, born in Hanover in 1738, migrated to England at age 19 and made a living as a composer and music teacher while building telescopes of such high resolving power that he was able to make startling astrological discoveries, such as identifying the planet Uranus. 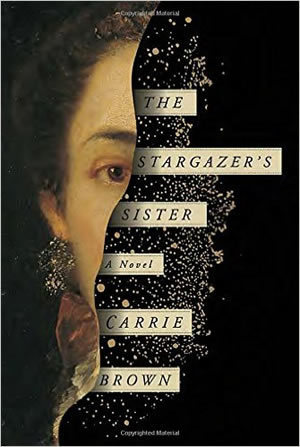 A proponent of the “Behind every great man is a great woman” theory would find confirmation in his younger sister, Caroline, who worked alongside her brother, assisting him with his own projects in a thousand important ways while also making her own valued contributions to astronomy. The Stargazer’s Sister, an historical novel by National Endowment for the Arts fellowship winner Carrie Brown, takes Caroline as its point of view character to investigate the brother and sister pair who lived and worked together for decades in a remarkably close and generous relationship, “perhaps unparalleled in scientific history,” as Brown notes in her acknowledgements.

The novel begins with a wretched 22-year-old Caroline, having barely survived smallpox in her girlhood, now living in misery with her loveless and wrathful mother. “Save me,” Caroline writes to William, and he does, returning by boat to Hanover to claim Caroline and bring her back to England. In gratitude and love, she pledges to herself to further William’s studies, unflinchingly and with good cheer. She is not naive in her promise, not spineless. Her own intelligence is significant, yet she believes his to be greater, and makes the sacrifices required to further the mapping of the heavens.

Caroline’s dedication to her brother’s work — whether it’s singing William’s compositions to save him the cost of hiring a performer, feeding the crew of laborers building telescopes or staying up all night to take notes on William’s observations, means she must forgo romance, forgo having children, though William eventually enjoys both himself. We see her struggle at times with all that’s being asked of her, but ultimately the bond with William and her own love of the stars keep her from despair. Brown’s understanding of Caroline’s interior spaces is nuanced and complex.

Throughout the novel, Brown finds language that is musical and poetic without being merely decorative. Ezra Pound, who wrote that “the natural object is always the adequate symbol,” would have praised Brown’s ability to find the natural object in her scenes, the symbol that furthers the theme. For example, we see Caroline, whose face bears the pox marks, expressing an affinity for the cratered moon. Later, we see Caroline musing on the binary stars that her brother discovered and understanding how she and William are also bound to each other, circling, enthralled by gravity and their intertwined fates.

Fans of astronomy will talk keen pleasure in Brown’s historical details, the construction of a 40-foot telescope in the Herschels’ backyard, William’s mapping of doublestars, his conjectures regarding life on other planets, his deep sky surveys. But readers who can’t tell Saturn from a satellite will still thrill at the drama Brown injects into the well-paced scene, the way her backstory has prepared the reader to understand the full emotional register of, say, William’s discovery of the sixth and seventh moons of Saturn, or Caroline’s discovery of her first comet (she’d discover eight in total and innovate a new manner of “comet sweeping”).

Perhaps one could describe The Stargazer’s Sister as “quiet,” for in truth there’s not a shoot-out or scandal or a salacious seduction anywhere in its pages. But if it’s quiet, it’s quiet the way the stars are quiet, which is to say, the quiet lets us perceive the grandeur. It’s a story of family, a story of loyalty, ambition, sacrifice and love — which is to say, it’s merely a novel about all the things that really matter.

Beth Ann Fennelly is an associate professor of English and director of the MFA Program at the University of Mississippi.