Ten years after his city descended into madness, an anonymous company man sets out to write the definitive history of his home’s bloody, eerie crisis.

What were those earthshattering roars that would pierce the foul Turin night air, suffused with a sickening vinegar smell? What caused crowds of individuals to take to the streets in shambling, insomniac hazes? Who was responsible for the gruesome deaths of those waking zombies? And didn’t those statues in the town square used to be on the opposite pedestals? 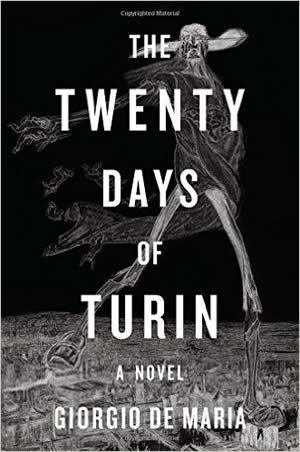 So forms the foundation of The Twenty Days of Turin, a cult novel by Italian author Giorgio De Maria (1924–2009). Originally written in the 1970s as Italy was gripped by neofascist violence, its first English version was just published earlier this year, translated by Ramon Glazov. Amid the turbulence of our own era, from terrorist campaigns to unpredictable politics, critics around the world have hailed it as a tale that remarkably speaks for our times.

The book’s most shocking plot device is The Library, an institution created by well-mannered, well-dressed and eerily polite young men in an abandoned sanitarium. Created ostensibly as a community reading room of confessions, diaries and personal notes — with authors’ identities available for a price — the artifice of a venue for fostering intimate human contact rots into a voyeuristic compound of lechery and judgment.

It’s a prescient downward spiral, as anyone with a passing familiarity of social media will recognize. The grim collection of ugliness is, if anything, far more tepid than its real world equivalents in the darker swamps of Reddit, 4chan and 8chan. It reminded me also of the trend in modern media for aspiring writers to try and break through with raw essays of personal pain. That commodification — the payment of pittance fees to, often, young women sharing stories of haunting abuse — suffuses many mainstream publications with a whiff of De Maria’s fictional odor.

Anyone looking for definitive answers of how all the pieces fit together will be disappointed after completing the slim novel. It remains more waking nightmare than detective story, and it recalls Guillermo del Toro’s 2006 film Pan’s Labyrinth, wherein a young girl tries to escape the despair of Franco’s Spain through the dark hallows of folktales — which may, or may not, be actually coming to life.

For the moral legacies of a city’s heroes play as much a role in The Twenty Days of Turin as the sins of their descendants. Who is celebrated in marble and granite in our town squares? Are they virtuous? Or are they, as in Turin, “beyond suspicion . . . inert and familiar . . . and yet soaked in blood from head to toe”?

The answer may well hold our fates. The past is never really done with us, and may be watching with disapproval.

Liam Farrell, former alumni editor of this magazine, is a writer who lives in Maryland.