Sophia Lyon Fahs’ Today’s Children and Yesterday’s Heritage: A Philosophy of Creative Religious Development is a wonder of a book, an argument for experiential learning first published in 1952, way ahead of its time.

The first sentence of the preface focuses right in on the problem: “In this attempt to set forth an emerging philosophy of religious education, we have dwelt especially on those points where the natural approach to religious development stands in marked contrast to the traditional approach of authority and indoctrination.” 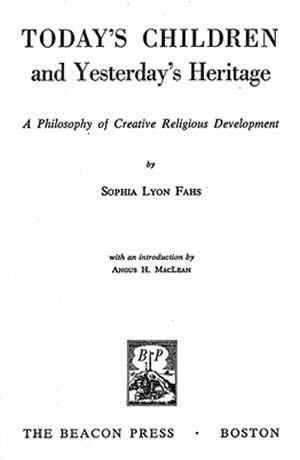 This brought to my mind the traditional approach I underwent. It’s easy to summarize. Memorize the Apostles’ Creed, which says in part:

I believe in God, the Father almighty, Creator of heaven and earth. And in Jesus Christ, his only Son, our Lord; who was conceived by the Holy Spirit, born of the Virgin Mary . . . I believe in the Holy Spirit, the holy Catholic Church, the communion of saints, the forgiveness of sins, the resurrection of the body, and life everlasting. Amen.

Now recite it verbatim in front of a congregation of Christians. That’s what we did in the Catholic Church where I grew up. We were 7 years old (the age of reason), near the end of second grade in the spring of 1946, we little boys in white suits and the little girls in white dresses for our First Holy Communion. Parents and other parishioners were there to ooh and ah.

Our pastor said Mass, we knelt at the rail and stuck our little tongues out to receive the consecrated host, and some kind of change took place in our souls, though I don’t remember feeling anything.

I have no idea how much of that tradition remains alive in the Catholic Church. I suppose that in some places it has not changed one bit, where in others it’s greatly different.

In her book, Fahs calls for an education chiefly focused on religious belief discovery, formation and development as a key part of total self-development. She advocates for a rational, critical approach to sacred texts and doctrines from the world’s major religions as one main area of study. Go where she takes you, and you can see that her plan points to lifelong learning, lifelong self-development.

To illuminate some details of the Fahs approach, we have the memorial words from the Reverend Doctor Barry Andrews, Unitarian Universalist minister emeritus, following Fahs’ death in 1978 — 102 years after her birth. “Sophia Fahs,” Andrews writes, “was a progressive religious educator who believed deeply in engaging children where they lived, in the world of their daily lives, in the process of equipping them to deal with everyday problems. She also sought to stimulate their sense of wonder and curiosity about life.”

As she wrote, “Instead of helping children . . . to think about religious things, we need to learn how to help children think about ordinary things until insights and feelings are found which have a religious quality.”

The philosophy of life that Fahs writes about in Today’s Children and Yesterday’s Heritage suggested to me that if some of the bigger questions should arise — why are we here; what’s it all about; is this all there is — then relevant experiences can be recounted, quotes from respected sources repeated, hypotheses entertained and goals identified for further investigation. Values formation is part of the curriculum, and progress reports are appropriate activities to summarize and build on what can be called a belief edifice in a person’s life.

Fahs also notes that we outgrow selves and the beliefs that undergird them. In fact it is often a disillusioning experience, shattering an immature belief that forces us to abandon an obsolete self and construct a new one.

My experience of memorizing and repeating the Apostles’ Creed may have been counterproductive, for Fahs believes that to insist a child hold unchangeable beliefs may stunt their growth. As mature adults we need to be free to look back on beliefs we held as children and celebrate our growth that we have put aside childish things and grown into adult selves with adult beliefs.

Let us all worship together, she concludes, in a universal brother- and sisterhood. Let us venture together into the future of faith, determined to keep faith alive because our humanity is only complete when our believing selves are strong and healthy.

Fahs’s declaration of a new era occurred six years after my first Holy Communion, as I passed from 7th grade to 8th at the same Catholic school. I was still reciting the Apostles’ Creed and continued to do so for 10 more years. Sixty years went by before Fahs’ message finally reached me. Late, yes, but still power-packed.

Lyn Relph taught English at California State University Chico from 1966 to ’95. He and his wife, Kate Hulbert, live in Tucson Arizona.