Years ago, I wrote in the South Bend Tribune about an inner-city school principal who was retiring. His advice to parents was this: Require your kids to carry a book with them. They just might get bored, have nothing else to do, start reading and actually learn something.

Obviously, those were the days before Facebook and smartphones. But it is advice I took for myself. For many years, I kept a copy of Sherwood Anderson’s Winesburg, Ohio in my car. 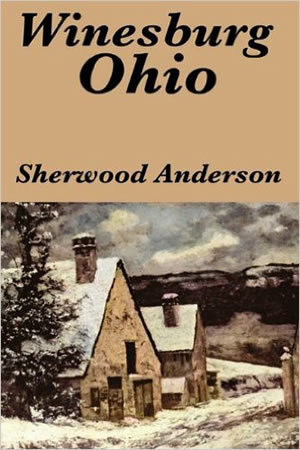 I was introduced to Winesburg as part of Notre Dame’s American Studies curriculum. I’m sure I filled several pages of a notebook with the lessons Professor Ron Weber found in the book. Over the past 40 years, I’ve been to Anderson’s fictional Winesburg and back a couple dozen more times, and I’ve enjoyed the chance to roam those streets on my own.

With this book published in 1919, Anderson fuses 24 short stories into a 200-page novel. Each story can stand on its own or, if you like, take you a few yards farther on the longer journey. It’s a format Ernest Hemingway used a few years later to sequence his Nick Adams stories for his In Our Time collection.

Anderson creates the recurring character of George Willard, a young newspaper reporter, to introduce men and women who live outside the mainstream of Winesburg, a typical Midwestern town at the beginning of the 20th century. George is the confidant of these “grotesques,” and he learns their secrets. They generally are angry or sad, as most misfits I’ve met seem to be. They have at their core a message that they hide from others.

Here’s a passage from the Respectability chapter, in which George is probing into the sadness of a telegraph operator named Wash Williams. He has simply guessed that Wash has been married and that his wife has died:

“Wash Williams spat forth a succession of vile oaths. ‘Yes, she is dead,’ he agreed. ‘She is dead as all women are dead. She is a living-dead thing, walking in the sight of men and making the earth foul by her presence.’ . . . The telegraph operator of Winesburg, sitting in the darkness on the railroad ties, had become a poet. Hatred had raised him to that elevation. ‘It is because I saw you kissing the lips of that Belle Carpenter that I tell you my story,’ he said. ‘What happened to me may next happen to you. I want to put you on your guard. Already you may be having dreams in your head. I want to destroy them.’”

I can imagine that a lot of readers in 1919 were rattled by Wash Williams and by Winesburg. Our small towns then claimed to be pure and serene. Evil supposedly came only when we moved from our farms and towns to the big cities, like Chicago. That theme of innocence vs. corruption was expressed well by contemporary authors such as Theodore Dreiser and in greater detail in more modern times in Erik Larson’s The Devil in the White City.

In many ways, I was inspired to become a news reporter because of George Willard and Winesburg. In my 30-plus years of writing, my best work often involved character sketches like Anderson’s. A throwaway story about a heroic cat that killed a bat actually is about an older woman’s hunger for salvation. A quick interview with a rock collector turns into an examination of his desperate loneliness. We ask questions. We listen closely. If we’re good at it, people reveal the best and worst of their inner selves.

This is policy: If I see a copy of Winesburg, Ohio on the shelves of a used bookstore, I buy it. I’ve given a dozen or so copies to new graduates or old friends who are moving away. But before I give the gift, I look through the pages to see if the previous owners did any underlining or yellow highlighting. I can’t help it. I’m still looking because there are always more secrets.