Steven Spielberg’s latest dash for an Oscar, The Post, opened in New York, Los Angeles and Washington in time for the end-of-year awards deadline and is now playing everywhere, even the Midcoast of Maine where I viewed it recently. The film has some personal meaning for me, including the fact that I knew some of the people portrayed in it. Whether or not one has knowledge of the historical events driving the story, though, this political thriller is a brilliant mixture of forceful acting, interesting period sets and a compelling screenplay — considering that neither a single shot is fired nor a punch thrown, let alone landed. 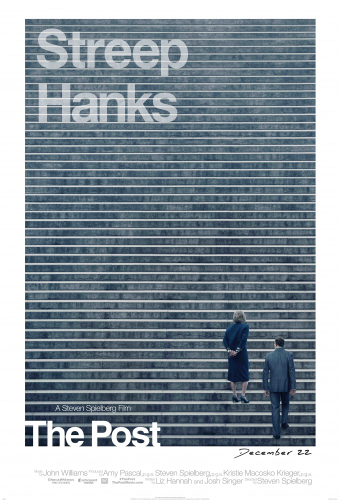 Meryl Streep stars as Katharine Graham, publisher and later chairman of the board of The Washington Post, and Tom Hanks portrays Graham’s legendary editor, the late Benjamin C. Bradlee. Graham and Bradlee are icons in the journalistic demimonde, and the film’s focus, the newspaper’s decision in June 1971 to print classified documents about the Vietnam War — the “Pentagon Papers” — captures a moment of great triumph for newspapers and the First Amendment.

The Pentagon Papers were an exhaustive history of the Vietnam War from the Truman administration though the Eisenhower, Kennedy and Johnson administrations, 47 volumes in all, commissioned in the 1960s by the Department of Defense. Largely because of the study, and its being leaked to major newspapers by a former DOD analyst named Daniel Ellsberg, Americans now know that their leaders lied about progress in the war and the chances for success. Often complicated and verbose, the Pentagon Papers might not have created such a fuss if President Richard M. Nixon had not tried to prevent further publication once the documents, and stories about them began to appear — first in The New York Times and then in the Post. As the film notes, those who decided to publish classified documents knew they could face extreme legal challenges, even imprisonment. Nixon’s effort to quell the papers’ disclosure ensured them greater attention.

Of course, by 1971, the war was already very unpopular. The saga probably had more impact on favorable media ratings — how times have changed — than on war policies. The suppression effort ultimately failed in the courts, after which Nixon appeared to become more paranoid about the press, a trend some have linked to the subsequent Watergate scandal that brought down his presidency.

Why did Spielberg make a film about the Post instead of the Times, which broke the story and had worked on it for months? Katharine Graham’s 1997 autobiography, Personal History, inspired screenwriters. Her challenges as a woman entrusted with leadership of the newspaper after the suicide of her husband, Philip Graham, in 1963, made for a better story than the decisions made by Arthur “Punch” Sulzberger, the admired but stolid publisher of the rival New York paper.  In 1971, the Times was already the preeminent American newspaper and the Post was still seen primarily as a local publication in an important city. Graham and Bradlee’s risky decision to pursue the story would prove to be a tremendous boost for the newspaper in national prestige.

Those of us who are inspired, at least some of the time, by mainstream journalism will love the story, but not everyone will feel the same, especially in this strongly divided political atmosphere. That aside, the film’s cinematographic excellence begins, as usual, with Streep. Her manner and makeup could convince even someone who knew Mrs. Graham that they are seeing the real person. Hanks does a creditable job as Bradlee, even if he falls short of the masterful standard Jason Robards set in 1976 in All the President’s Men. Sarah Paulson, playing Bradlee’s then-wife, Tony, adds an element of humanity and humility in contrast with Graham’s regal bearing and Bradlee’s swashbuckling.

Spielberg has a tendency to overdramatize. It’s not enough that the Post sends a copy boy to spy on the Times, which Bradlee suspected was working on something big, but he must also nearly be hit by a cab as he crosses West 43rd Street. The film also features anti-war demonstrations as a result of the papers’ publication, when the actual public reaction was mild. And so on. Yet such flourishes are unnecessary. The story maintains its own tension throughout, and is serious and high-minded.

Neither my relationships with the movie’s characters nor my role in the story were significant, but it is an interesting experience to sit in a theater 46 years later and see it all on the silver screen.

I spent four decades in the newspaper business, more or less contemporaneously with Graham, Bradlee and others, and I knew them, though not closely. To me, Streep’s Graham is a much warmer figure than the Mrs. G. I knew. Not that she wasn’t a nice person — she was — but she was shy and not always at ease in public. Hanks’ Bradlee — brash, irreverent, competitive and occasionally profane — is not too far off. My wife and I knew Tony somewhat better. During time we spent in Washington in the mid-1980s, Tony, by then divorced from Ben, was our next-door neighbor. Two children from her first marriage, Dino and Marina — who appears as a child in the film — were in and out of the house. We did not know them well, but Tony was very cordial.

I also was involved in the story as a journalist. I had been a correspondent in Vietnam and, in June 1971, had just moved to Boston from Washington to take over as metropolitan editor of The Boston Globe. After the court injunction preventing the Post from further publication of the documents, Ellsberg gave them to the Globe. I wrote one of the stories that night, and we were enjoined by a federal court the following day.

The legal issue in these cases was whether the government could exercise “prior restraint” on a newspaper’s ability to publish something, rather than prosecuting after the fact for violation of state secrets. Today, prior restraint would theoretically be impossible, given the many tributaries of the internet.

All was eventually resolved in the Supreme Court’s 6-3 decision, in New York Times Co. v. United States, to allow the papers to resume publication without fear of federal action. (The Globe had opted to pursue its case in Boston’s federal court, ensuring for all time that it would remain outside the spotlight that has shined on the victory of the Times and the Post.)

One footnote: Leonard Downie, who was executive editor of the Post for 17 years following Bradlee, served as a consultant on the film. He told me that, having visited Graham’s home many times, he was almost overcome with emotion when he saw how faithfully the film’s set designers recreated the interior of her Georgetown home.

Matt Storin was editor of The Boston Globe from 1993 to 2001 and later served as an administrator and faculty member at Notre Dame, where he received an honorary doctor of laws degree in 2006.