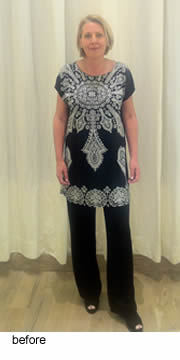 Marguerite Cremin, an Irishwoman living and working in Jamaica as an executive at the global spirits corporation Diageo, was in need of an image do-over. “Marguerite was in a place of complacency and needed to reconnect with herself,” says her executive coach Patrick Parks ’01, CEO and founder of MVP Group.

Cremin traveled to Miami in January, where Arienne Thompson ’04 made her over from head-to-toe as part of a transformation exercise sponsored by MVP Group. Cremin explains her full-body makeover, which included training with former Notre Dame linebacker Rocky Boiman ’02.

AT: Congrats on the changes! What’s been the biggest takeaway from your makeover?

MC: I had the realization that this isn’t rocket science. I should’ve been doing this all along, taking care of my presentation and my whole image, I suppose. In terms of the clothes shopping, it was very interesting for me to see that I can move away from very staid colors to give a pop color. It makes you look more energized and feel more energized. It’s given me a determination and a desire to really just do it. It’s not difficult. You’ve shown me that it’s relatively easy. It’s just knowing the few little formulas to make things work. More than anything else though, I’ve made a sea-change in terms of: I will not undersell myself from an image perspective. 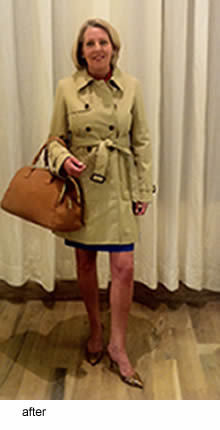 AT: Why weren’t you as invested in your appearance before the makeover?

MC: There’s a certain part of me that thinks it’s vanity or self-indulgent or unnecessary spending or I don’t have the time to shop or whatever else. But essentially what I’m realizing now is that that was a misconception because it really is part of your job and part of your role to be the best you can be as a leader. I think that perception has been removed once and for all.

AT: What was at the root of clearing the hurdle to improve your image?

MC: I kind of hide my light under a bushel somewhat, and I don’t know why because there’s absolutely no need to in terms of being who you can be. Stop pissing around! That’s how I’m feeling at the moment. I feel great; I feel energized; I feel resolute. And also trying on the clothes just made me realize, “You have to lose this weight!” It has to go, but I’m less concerned about that because I’m on that road. That decision was made. That’s just going to take time.

AT: What do you have to look forward to in your post-makeover life?

MC: Although it may sound shallow, image does matter. Also, as a woman, everyone likes to feel great and that they’re in style and that they’re appropriately dressed and feel cute. The makeover was, more than anything else, a landmark decision that no longer will I be totally and only focused on the work. I’m not saying that I didn’t look okay, but you have taught me that there are many, many opportunities to enhance how I look and still feel like me. It’s been great, and I’m excited!

Arienne Thompson is a Washington, D.C.-based fashion and celebrity reporter at USA Today.