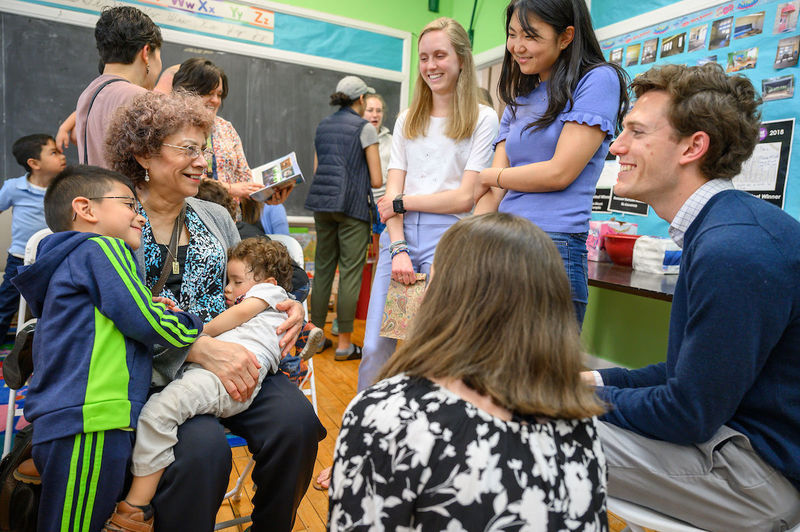 Notre Dame students in a 2019 community-based learning course “Immigration and the Construction of Memory” meet with local Spanish speakers to learn about their family histories. Photo by Matt Cashore ’94

Unofficially, she is a bubble popper.

When she arrived at Notre Dame two decades ago, Mick saw that her students tended to write from within the small bubble of their own experiences. They did their best work, she says, when they wrote about “matters of significance” — things like poverty, homelessness and injustice. And in South Bend, Mick saw an opportunity for students to gain firsthand experience of these things — not just to write about poverty, but to see and feel it and connect with people living on society’s economic margins. So she began pushing her students to step beyond the invisible barrier of the “Notre Dame bubble” and into the surrounding community.

It worked. The more students listened, did local research and forged meaningful relationships in the community, the more their writing improved. Their arguments became powerful, empathic and persuasive.

And, at the same time, they were able to make meaningful contributions in the community. For Mick, it was a first hunch in a slow-burning revelation that “good writing is in fact writing for the common good, ethical writing that persuades others to think and act in ways that advance humanity.”

Early on, Mick found a rationale for this way of teaching in a paradigm called “community-based learning” (CBL), and that led her to the Center for Social Concerns. CBL doesn’t see learning as a download, a transfer of knowledge from a professor’s brain to a student. Instead it views education as a two-way-street — a roundabout, even. Knowledge can come from anywhere, and students actively contribute to it. CBL doesn’t throw out the classroom. Rather, it enriches the classroom experience by connecting it directly with basic human needs.

At the center, Mick began offering workshops in an effort to get other faculty members interested in community-based approaches to their teaching and research. After several iterations, though, she realized something was wrong.

Her workshops talked about CBL. They offered facts and data. But it was all too comfortable. The theory was there, but not the practice. Then she realized that professors need their bubbles popped, too. To understand CBL, they needed to get off campus, step outside their disciplines, their areas of expertise, their rhythms of research and publication.

So in 2012, the Community Engagement Faculty Institute was born, offering immersion into the theory and practice of CBL. Participants commit to three full days without any distractions. “It’s not a conference,” Mick explains. “It’s not a drop-in-and-drop-out kind of thing. Participants need a significant amount of time and attention to see the people behind the statistics and to build relationships with them and with each other.”

This principle of “intentional relationship building” structures the institute. Mick and her team limit the number of participants so the group can break bread together. Father Bob’s Coffeehouse in Geddes Hall becomes their launchpad. They leave from it in a small fleet of minivans to travel offsite together. And they return to it to process and share their experiences.

And so on. The point of these visits is to learn not just the facts but the feel and the flow of CBL as it pairs action and reflection, encouraging professors to step beyond their comfort zones, whatever they may be. “I can do war zones,” one peace studies scholar reflected after being overwhelmed with hugs by Logan residents, “but I can’t do that.”

What comes of all this bubble popping? Mick says the trick is to not decide in advance what the product will be. Often the results are serendipitous — things she never could have predicted.

After taking part in the institute, Lucien Steil, a former Notre Dame professor of architecture, partnered with psychology professor Anre Venter to teach a course called Architecture Which Hurts, Architecture Which Heals. The idea germinated during Steil’s visit to the Juvenile Justice Center in South Bend. He noticed the facility’s empty concrete courtyard and bare walls, and he began to think about architecture’s role in rehabilitation, especially in the lives of children.

Steil and Venter offered the first version of their course in 2015, and over a few years they and their students worked with center’s residents to make the environment more nurturing. They added plants, color, furniture. Eventually the professors took one class to Germany to study that country’s rehabilitation-focused approach to corrections architecture.

CEFI alumni have created courses as varied as the professors who teach them and the problems they address. This fall, barring changes due to the COVID-19 pandemic, Notre Dame will offer over 170 CBL courses across 40 disciplines. Law students will provide legal services and advice to area residents who cannot afford them. In romance languages, Professor Rachel Rivers Parroquín spearheads the effort to connect students learning Spanish to native Spanish speakers — and the concerns and cultural celebrations of South Bend’s Hispanic community — through partner organizations like La Casa de Amistad, a west side youth and community center.

“It’s an embarrassment of riches,” Mick says. She now has to turn away more presenters and participants than she accepts as demand for the institute grows.

What makes this difficult work so attractive? After all, Notre Dame professors aren’t required to teach community-based courses or conduct community-based research, which rarely offers the most career-advancing lines on a CV.

Mick sees two reasons. First, great professors know they are still learners, people who want their intellectual bubbles popped. “If you are someone who loves teaching,” she explains, “you love environments where you don’t have all the answers, where something happens that wasn’t on the syllabus or doesn’t fit the model, something that shows the limits of your imagination.”

The second reason is a simple belief about human solidarity, about a world bigger than our bubbles. As she puts it, “We owe each other what we know.”