They were really one team. Between the 1946 and 1947 football seasons, Notre Dame lost only three starters. In the debate for “best ever” in college football, Doctor Z of Sports Illustrated argued that it came down to one of those two teams.

My new documentary, The Greatest Team: Notre Dame’s Unrivaled 1946-47 Football Squads, tells the story of this postwar dynasty, featuring the players, coaches and sportswriters who were there. 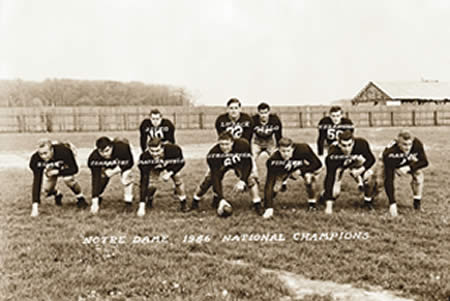 The rosters included two future Heisman trophy winners, quarterback Johnny Lujack ’48 and end Leon Hart ’50. Tackle George Connor ’48 and guard Bill Fischer ’49 would each go on to win the Outland Trophy as the nation’s best lineman. In all, 11 players on those teams were named All-American. Seven are in the College Football Hall of Fame.

More than 40 went on to careers in pro football, including players like reserve center Art Statuto ’48, who never earned a Notre Dame monogram but went on to become a starter for the NFL’s Los Angeles Rams.

Many were World War II veterans, part of the returning influx of men, older and more disciplined than typical students, contributing to one of the most competitive eras in college football history — an era Notre Dame dominated.

As great as the starting core was, the rest of the depth chart helped forge the legacy of those years. With so much talent to choose from, head coach Frank Leahy alternated the first and second teams in 1946. The first team beat down opponents in the first and third quarters; the second team whipped them in the second and fourth.

Quarterback George Ratterman ’49, part of the second unit, told Sports Illustrated what an advantage they had lining up across from an opponent already worn down by Notre Dame’s first wave. Nearly three-fourths of the team’s offensive production, in fact, came in the second and fourth quarters, from this ostensible second string.

Every day but Saturday they brutalized each other. Practices were notoriously tough, with frequent, full-contact scrimmages to distinguish the razor-thin differences between those who would play and those who would watch from the sidelines.

As many as three intrasquad games would happen simultaneously with Leahy observing from a tower. He could afford such ferocious practices because the team had the depth to endure injuries. Under those circumstances, Leahy didn’t have much sympathy for ordinary bumps, bruises, sprains and strains.

My father, John “Pep” Panelli ’49, the starting fullback on the 1947 team, remembers Leahy’s single-minded intensity this way: “If he didn’t see blood, you were loafing”

Or, as reserve quarterback Gerry Begley ’50 put it: “Leahy was going to find the best 11 players, even if it killed everyone in the process.”

Opponents endured most of the damage from Leahy’s methods, which ultimately produced four straight unbeaten seasons and three national championships between 1946 and 1949.

The first two postwar years stand out even in that span of near-perfection. Winning two national championships with a combined record of 17-0-1 — the only blemish a 0-0 tie against Army in 1946 — the 1946 and 1947 Fighting Irish teams accumulated a statistical profile without peer before or since.

Notre Dame never trailed, not for one second, during those two seasons, averaging 31 points per game while holding opponents to less than 5.

Despite the relentless competition for playing time, the players developed a camaraderie that endured for decades. Suffering under the unyielding Leahy established a bond of commiseration and a shared sense of purpose that turned a collection of great individuals into a team.

“Everybody seemed to have that same love for Notre Dame,” Bill Fischer says in The Greatest Team.

“Without question,” Pep Panelli replies. “Notre Dame men, all of us. Through and through.”