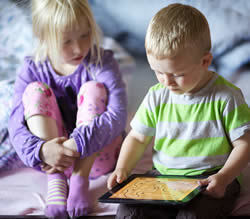 Even as we mourn the death of Steve Jobs and laud his enormous contributions, we must be mindful of the power of his innovations and ensure that, by using them, our humanity is not compromised.

Steve Jobs defined what it meant to be human. His natural curiosity led him to explore new ideas. His brilliance allowed him to capitalize on what he learned. His creativity drove him forward. Jobs applied his humanity to create what he called “seamless” products: devices so intuitive that using them becomes second nature. Yet Jobs himself grew up in a world without such gadgets, and we’re convinced the absence of technology propelled his ingenuity.

Jobs’s path to innovation was not built on a digital platform. He spent his youth mining his own natural resources — i.e., his brain and creativity. Early on, he built models, took electronics classes, tinkered in garages with other kids where they experimented, failed and tried again. Taking a calligraphy course after he dropped out of college, he grew to appreciate the sweeping curves of letters and the power of an elegant typeface. A decade later, he applied his design learning to breathtaking effect on the first Macintosh. The rest of his life, he continued to embrace the liberal arts, hiring poets, scientists, musicians and writers to work with him on Apple vehicles for customers’ creative expression.

For children, new digital devices including those from Apple make learning more portable and fun — and stimulate their imagination. Or do they? Our children can certainly read about how to build a computer motherboard just as easily on an iPad as Jobs discovered with his own hands. We believe there is a critical distinction and wonder if it is possible for children to discover their own inborn interests and capabilities within the confines of a touch screen. We worry that children who are never bored will not need to invent new ways to amuse themselves, as Jobs and others his age had to when they were young.

Devices that do their thinking for them may rob young children of the time they need to follow their curiosity, to know their own minds and to discover their inborn capabilities. This has serious implications for the future. If the world is populated by people who don’t think for themselves, society stands to stagnate, relying on innovations from previous generations and having none of its own.

A number of educators, especially at the secondary and undergraduate level, note a certain cognitive laziness stealing over students. A growing number seeming less tolerant of puzzling things out, of working with abstraction, or countering challenges to their thinking. They can lack patience to strategize and be reluctant to hazard an off-the-cuff answer with Google always at hand. Many submit written work that conforms to the letter, but lacks insight or risk-taking.

Is this proof of the well-documented shortcomings of our educational system? Perhaps in part. But the national data on laptops and tablets in the classroom are exciting but also mixed, with many professors and students themselves admitting the devices, without careful direction, can facilitate more distraction than learning in the classroom.

In his graduation address at Stanford, Jobs admonished students to “Stay hungry. Stay foolish.” Jobs himself said that his greatest successes only became possible because he failed on an epic scale when he lost the very company he had founded.

It will take real discipline not to allow young children to avail themselves too quickly of the easy rewards of technology; rewards that instantly satisfy their hunger for understanding and don’t allow them to be foolish, or even to fail.

Even as we now comfortably exist in the grasp of Jobs’s brilliance, we need to remind ourselves that our smart gadgets should always enhance our humanity, and not supplant it.

Jenifer Joy Madden ’79 is an independent multi-media producer, adjunct faculty for the Newhouse School of Public Communications and a member of the Society of Environmental Journalists. She writes The Durable Human, a blog about sensible living in the digital world, and is developing a book project called Raising a Durable Human.
Caron Martinez is a professorial lecturer in the Literature Department at American University in Washington, D.C., and a writing consultant for the Federal Deposit Insurance Corporation (FDIC) in Arlington, Virginia. Between them, the writers have six children, aged 16 to 27.