Step up to the sleek new bar at The Exchange in downtown South Bend and ask for the Swizzle. It won’t include cloying whipped-cream-flavored vodka. Instead, you’ll get a robust ginger-lime cocktail with a big hit of whiskey. Local whiskey.

In the past few years, the cocktail pendulum has been swinging away from clear, sweet liquors and toward the scotches and whiskeys that make for Manhattans and Old-Fashioneds. For even longer, a movement has been building toward all things local. Now a cadre of Domers is capitalizing on both trends. 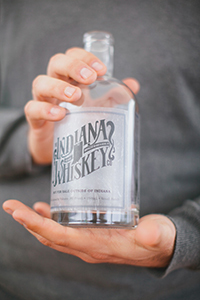 So far the company is sending out 20 cases per week of its young Silver Sweet Corn whiskey, available only in-state. A long string of local liquor stores already carry it, along with such bars and restaurants as Cafe Navarre, Corndance Tavern, LaSalle Grille and The Exchange. “Our distributor makes the sale, but he hasn’t had a hard time,” Weldy says. “As soon as you tell a person in St. Joseph County that we’re actually distilling in St. Joseph County, they’re interested.”

A two-year straight whiskey will be released in 2015. A four-year sipping bourbon is planned for later. The response to the company’s first offering has been enthusiastic. As Florance puts it: “It’s very smooth, very sweet, and it doesn’t punch you in the face like you expect a young whiskey to do.”

Virtually everything the company uses, from its space to its ingredients, is local. A rust-colored former trucking terminal west of downtown was reincarnated as the distillery. South Bend sheet metal workers fabricated the stainless steel fermenters and copper still. Northern Indiana farmers grow the half-ton of sweet corn, wheat and barley needed weekly. The logo was created by an Elkhart designer and chosen by vote. Even the labels on the bottles are printed in the area.

“To me it came down to using what we had locally,” Florance says. “That included not only our local agricultural heritage but also our manufacturing one.”

The local institution that most enabled the new venture to start up was Notre Dame. Florance and his fellow business students developed their plans as part of many class projects. They participated in the McCloskey Business Plan Competition and were mentored by faculty and advisers involved with the Gigot Center for Entrepreneurship. They raised $220,000 in starting capital, largely through the Fighting Irish family.

So when Florance raises a glass of the local whiskey that he had only imagined distilling, he toasts his alma mater. “Without Notre Dame,” he says, “this company never would have existed.”

Lynn Freehill-Maye, the former editor of The Alcalde, the University of Texas at Austin’s alumni magazine, is now a South Bend-based freelance writer.