I awoke in South Bend on Tuesday, March 22, to the dismaying news of the terrorist attack in Belgium, sobered all the more by my calculation that one week earlier, at the same time, my five urban design students, a colleague and I were in the exact place where the two suicide bombers detonated themselves in Brussels Airport. 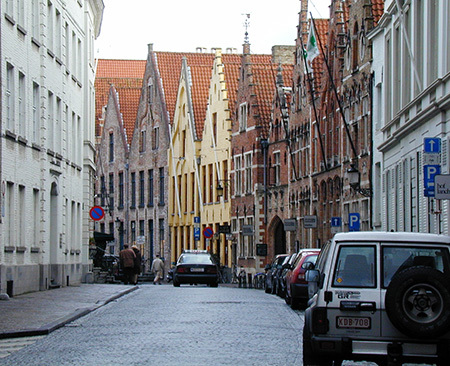 Notre Dame has no formal programs for students in Belgium, but I have been meeting our graduate urban design students there for years. Arriving in Brussels we travel west to the region of Flanders, to visit the historic centers of select examples of the small, self-governing, artistically significant, independent city-states that proliferated there during the high and late Middle Ages: Cities built on flat terrain in a cold climate, made beautiful over time by a thriving mercantile culture both animated and constrained by Catholic Christian sensibility.

For almost 50 years all Notre Dame architecture students have spent one or two semesters living in Rome and traveling throughout Italy during their residency. For the past 11 years the School of Architecture’s graduate urban design concentration has supplemented student time in Rome with a trip to Flanders in the spring, and a ten-day American urbanism field trip in August just before the start of the fall semester. The primary purpose of these trips is to study the formal order of selected Italian, Flemish and American cities and towns and the cultures that produced them, as part of preparing students for their professional lives as architects and urban designers. Our week in Flanders focuses upon the high medieval urban form and culture of Bruges and Ghent, and also upon 16th century Antwerp, as critical places and moments in the historic transition from a medieval northern European culture of city-states to the modern European culture of nation-states. 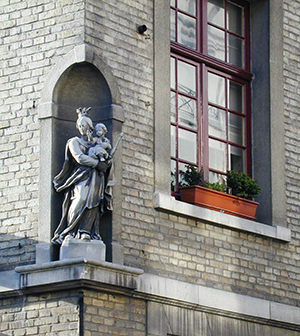 We spend most of our time in Bruges, a city unique in Flanders for having been spared the ravages of both of 20th century Europe’s devastating wars. It remains the most physically intact of the great medieval Flemish city-states. I want our students to see not only Bruges’ beautiful streets and squares and churches, its magnificent medieval town hall and great belfry, but also the small signs of Bruges’ original animating Catholic piety, now in steep decline: the beautiful monastery-like Beguinage; the hundreds of Madonnas embedded in niches throughout the city; the more than two dozen centuries-old almshouses for the poor spread about Bruges’ two square miles. These godshuises remain instructive models of simple, small, well-built, beautiful buildings and courtyards that even in today’s secular Belgium continue to perform the corporal works of mercy they were long ago designed to do.

We typically reside in Bruges our entire six days. We spend three days walking around, measuring, drawing, photographing and analyzing Bruges itself. We bike to spend a day in Bruges’ medieval port city of Damme. We take a train to Ghent for a day, partly to see its historic center but primarily to see the Ghent Altarpiece, Hubert and Jan Van Eyck’s magnificent 15th century polyptych painting of salvation history — including its depiction of paradise as a New Eden and New Jerusalem in a distinctively Flemish idiom. On our final day we take a longer train trip to visit the historic center of the large and bustling modern city of Antwerp. I’ve now done this trip long enough to have made several Flemish friends, and for our annual Notre Dame contingent to have become “regulars” in several Flemish establishments. I enjoy both Flanders and the Flemish, and most of my students seem to enjoy Flanders as well.

Present-day Bruges is sometimes disdained for allegedly having become “like Disneyland.” This Magic Kingdom tourist image of Bruges is captured with an ironic lack of irony by Harry Waters, the appalling crime boss played by Ralph Fiennes in the 2008 film In Bruges: “It’s a fairytale town, isn’t it?” But this occasional disdain for Bruges gets things exactly backwards. It’s more accurate to say that Disneyland, in its scale, its convenience and its superficial, symbolic pretensions, has modeled itself after places like Bruges — which in turn had aspired to model itself upon the ideal of the New Jerusalem, the heavenly city envisioned and described by St. John the Evangelist in The Book of Revelation. And it was in pursuing that aspiration that Bruges, over time, made itself the enduringly beautiful city it remains today. 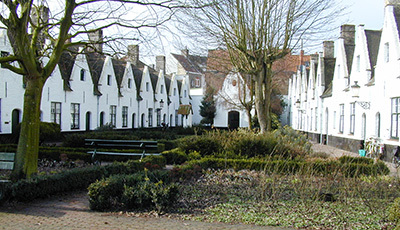 I fear that parsing such declensions of ideals and culture is becoming both more necessary and less efficacious. It is increasingly evident that all of Europe — but especially Belgium — is caught up in, implicated in and threatened by a deep civilizational crisis, only the most visible current manifestations of which are suicide bombs in airports on a Tuesday morning. On the one hand, post-modern Belgium is on the cutting edge of involuntary euthanasia programs. On the other hand, Belgium leads all European Union nations in the number of citizens per capita who travel to the Middle East to fight for ISIS; and the Islamist cell in Brussels responsible for the recent airport bombing was apparently the same Islamist cell responsible for the November attacks upon Paris. However else one might characterize contemporary Belgian culture, one is safe in saying that its current trajectory appears neither generally Christian nor specifically Catholic.

I wish I could write therefore that the combined airport-and-underground attack, which killed 32 people and wounded hundreds more, came as a surprise — that it was unexpected, anomalous. But although the odds of being a victim of a terrorist atrocity are quite small, the Brussels bombing did not come as a surprise; and, except for the timing, it was not unexpected, and it is not anomalous.

I wish, too, I could write that I think circumstances in the world generally, and Europe in particular, will get better before they get worse, but I’m not optimistic. And if I’m correct in my pessimism, I don’t know what this means for continuing Notre Dame architecture travels to Flanders, to Italy, and elsewhere in Europe. My sense is that although Italy’s internal security apparatus appears better prepared and more vigilant than Belgium’s, there is no sizeable city or transportation center in Europe immune to the effects of the titanic demographic and political forces currently at work in Europe, the Mediterranean region and, indeed, the world.

I hope for the sake of our students that their European studies, from which so many have benefited and benefit, can and will continue. But we should not fool ourselves that the relative safety and ease of international travel to which we have become accustomed in the past 20 years is something in the future we simply can take for granted. 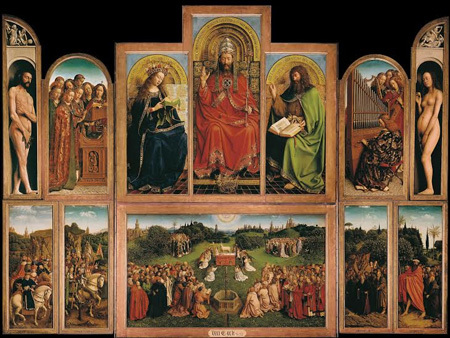 As we go forward, I pray for our students; for the victims of the recent attacks in Brussels and the healing of those who were wounded; for resolve among and with gratitude for the guardians of public safety and political order; for a change of heart in those who perpetrate acts of wanton destruction; for peace in Europe and the Middle East and aid for displaced persons; and for a just and generous solution to the refugee crisis that now afflicts those troubled parts of the world.