This morning my son threw up his breakfast. He’s not sick. He’s just stressed out about hockey tryouts. He’s 8. This is ridiculous.

“You are awesome,” I tell him. “I’m so proud of you, whatever happens.” On it goes, my cheerleading. But he’s not listen- ing. He’s waiting for the roster.

If he makes Mite 1, he’ll be one of the last kids picked on a roster of 14. If he doesn’t make it, he’ll be a dominant player on Mite 2. And I have no idea what I should want for him. To be one of the best play- ers on the team who gets a zillion minutes of ice time every game, or just another kid on the third line who never gets on the ice for a penalty kill or the last two minutes of a big game — BUT who gets to practice with the “Elite” team, plays against tougher competition, develops his skills and is on track for Central States, AAA and that elusive Division I scholarship I couldn’t care less about.

I have no idea what is best for him, and I think that is why I was awake at 4 a.m. What is tearing at me is yesterday in the locker room he looked around at the other boys there and whispered to me, “I’ll never make the ‘1’ team, Mom. I’m not good enough.” 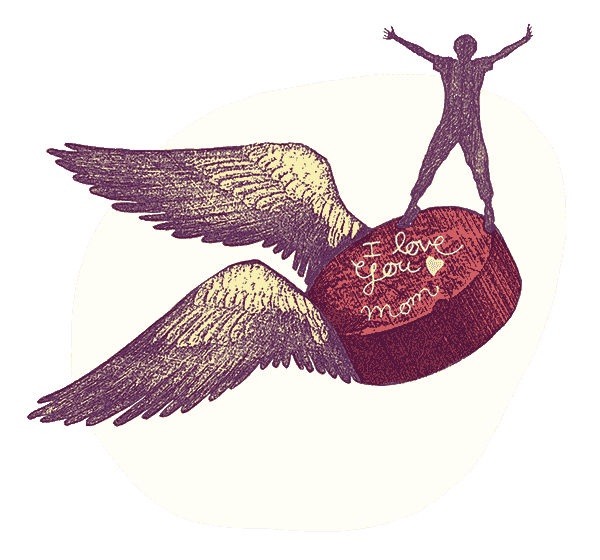 Because he is good enough — he is more than good enough. He is my kid, and I wanted to scream and shout: “You are so much better than ‘good enough,’ never let your value as a person be determined by another person or a hockey tryout.” Instead I told him, “I don’t care if you make the Number 1 team or not. I love you.” And he smiled his big, goofy, toothy grin, and at that moment I hated everything about hockey and locker rooms, taping sticks, lacing skates, snack bars, pro shops, the risk of injury and all the freaked-out parents and the politics and all of it.

Earlier that day I had buried a puck in the bottom of his bag, under all the gear, stained and beaten by hours on the ice. I dug it out and handed it to him. On the puck I had written with a gold marker, “I love you. Mom.”

What I love about my 8-year-old son is not seeing his name on a hockey team roster but that big toothy grin, the way he uses a dirty sock for a bookmark, his school shirts that look like he got into a fight with his lunch. I love holding his hand, the way he loves to hug, how happy he can be over French toast and the card he wrote to his grandmother for Mother’s Day.

A father of a boy we know recently commented to me that he liked my son’s drive and intensity. He told me his son wasn’t as competitive. The boy’s father wanted his son to be involved in something, maybe band, but another father told him every kid should do team sports for the life lessons they teach, so he’s forcing his son to play team sports.

I struggle sometimes to understand the lessons we learn through sports. Sitting beside my son when he thinks he’s not good enough, when he cries after a game and tells me he sucks, when he’s bullied in the locker room or learns the name for a “girl’s wiener” in Polish, I wonder what our children really learn about life from playing competitive sports.

I’m not sure an ice rink is the best place for my son to learn life lessons. Despite this, I’m still the one driving him to practice, driving him to tryouts. It’s me, not my son, who made the decision for him to try out for Mite 1. I’m the one who put us here, in the rink, on a Tuesday afternoon, risking not making the team, risking failure.

So on Tuesday afternoon my son opens the door, pulls on his gloves, steps onto the ice. He is wearing his favorite jersey and the beaten-up skates he no longer lets me tie for him, the skates he wore to every practice, every camp, every clinic and every hour he put into making this team. He is 8 years old and skating away from me with the courage to fail. Watching him step onto the ice is the hardest parenting I’ve ever done, and writing “I love you” on a hockey puck is the best advice I can offer as he plays this game — his game — as I sit on the sidelines and cheer.

Maraya Steadman is a stay-at-home mother who lives in a Chicago suburb. See her biweek- ly “The Playroom” column at magazine.nd.edu and at her website, marayasteadman.com. She can be reached at maraya@steadmans.org.