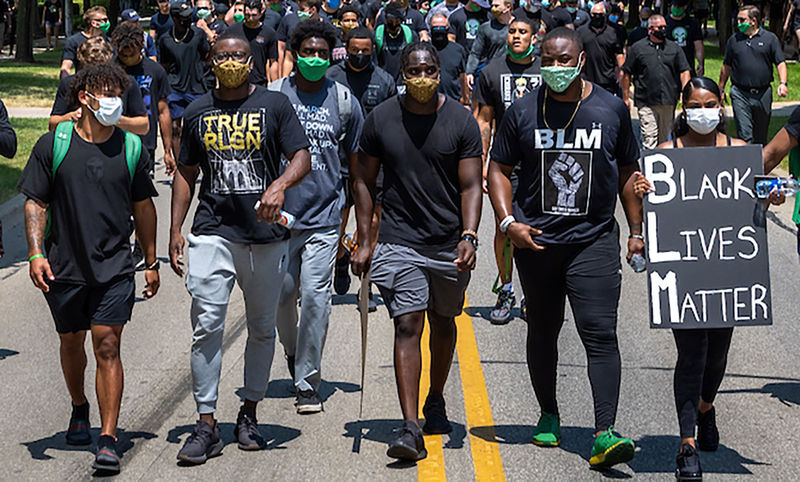 Notre Dame football players led a campus celebration of Juneteenth this summer, calling for a commitment to racial justice and to the Black Lives Matter movement.

“For all Black people in this country, today is our Fourth of July. It’s our Independence Day. And may it always be recognized as such,” said Daelin Hayes ’20, a graduate student and defensive lineman on the football team.

Hayes’ comments drew cheers from a crowd of several hundred people from the campus and local communities, many of them wearing black shirts to symbolize their support.

It was part of a national wave of marches and protests for racial justice since the May 25 death of George Floyd while he was handcuffed and being held down by police in Minneapolis.

Juneteenth celebrates Black history and freedom from slavery. On June 19, 1865, in Galveston, Texas, Union Army General Gordon Granger issued federal orders enforcing the freedom of all slaves in Texas. Although President Abraham Lincoln had formally freed the slaves with the Emancipation Proclamation nearly three years earlier and the Civil War had ended that April, Texas was remote, and enforcement of the proclamation hadn’t been consistent. The first celebration of the holiday took place in 1866.

The June 19 gathering on the Irish Green, organized by the athletic department, featured remarks and prayers followed by a unity walk around campus.

Hayes offered advice about how to become an ally in the Black Lives Matter movement and create a more just and equitable society, which he said requires a threefold commitment to the community, to diversifying one’s perspective and to accountability.

After suffering a season-ending shoulder injury last fall, Hayes devoted time to volunteer work in South Bend. He described how he went to Notre Dame’s Robinson Community Learning Center, which led to his becoming a conflict resolution volunteer at a grade school.

“Notre Dame cannot just be an ideal,” said Hayes, who urged a commitment to the entire community. As he learned last year, “We were right down the street from these little Black and brown kids that need our leadership and mentorship.”

Notre Dame’s president, Rev. John I. Jenkins, CSC, ’76, ’78M.A., led a prayer at the event, asking God for freedom from racist attitudes. “On this Juneteenth day, help us each to make a commitment in our hearts to fight racism in whatever form it appears among us or in our hearts,” Jenkins said. “And treat all with the dignity and respect they deserve.”

Head football coach Brian Kelly told the crowd he realized that he had to get involved after watching the police killing in May that prompted Black Lives Matter protests across the nation.

“Standing on the sidelines was no longer an option,” Kelly said. “I too, like many of you, had to learn.” He started by listening to his players. The coach said he couldn’t be more proud of the young men on his team than he was when they described their experiences facing racism.

Making substantial changes to resolve inequality in America will require energy to improve public schools and create a health care system that better serves Black Americans, Kelly said. “Across the board, this is change that really matters. And Black lives matter when it comes to those things.”

Kelly urged everyone not to limit their involvement to one day. “I’ll continue to open my ears and my eyes, and continue to educate myself,” he said. “It’s a real cause that we have to keep championing every single day.”

The athletic department issued a statement in early June vowing to “both create change locally and be a catalyst for change nationally,” and highlighting areas in which to improve, including listening more closely to African American student-athletes, amplifying their voices and building a more diverse professional staff.

Max Siegel, an offensive lineman and junior, said Notre Dame’s Black students have been unduly burdened to explain the African American experience to white classmates. Questions such as how one grooms hair can be hurtful, he said. “This responsibility should not lie on our own students,” Siegel said. He urged changes to the Moreau First Year Experience seminar, a course required of freshmen, to help better educate students about issues of race and culture.

An online petition started by the Black Alumni of Notre Dame calls for the University to take substantive steps to stop racism and to create a more inclusive and respectful campus environment for Black students. It had gathered more than 11,600 signatures by late August.

The University’s new provost, Marie Lynn Miranda, has met with professors from underrepresented groups to consider changes in efforts to recruit and retain minority faculty. University leaders are discussing the addition of anti-racism education to the core curriculum and developing tools for documenting the experiences of minorities on campus. Human resources is working to ensure diverse applicant pools, especially for salaried and management positions.

Jack Brennan, chairman of the University’s Board of Trustees, has established a Trustee Task Force on Diversity, Equity and Inclusion to examine the campus climate and offer further recommendations for improvement.

The University’s Klau Center for Civil and Human Rights, part of the Keough School of Global Affairs, has initiated a year-long initiative titled “Building an Anti-Racist Vocabulary.” The project is designed to educate students, faculty, staff and alumni, helping them explore and deconstruct concepts that support racism, and includes a Zoom-based lecture series, a one-credit course and a graduate student-led reading group on issues of racial justice and policing.

The lecture series began in late August with an address by Archbishop Wilton Gregory of the Archdiocese of Washington, D.C., who spoke on anti-racism as a moral imperative. “If I don’t move my heart, all I’ve done is taken down a granite statue,” the archbishop said, referring to the national movement to remove statues and monuments honoring Confederate generals and others who advocated racist institutions and ideals.

Among other speakers slated in the 12-part lecture series are Nikole Hannah-Jones ’98, a Pulitzer Prize-winning reporter for The New York Times who led the newspaper’s 1619 Project; Rhea Boyd ’06, director of strategy and equity for the California Children’s Trust; and Eric Holder, the U.S. attorney general during the Obama administration.