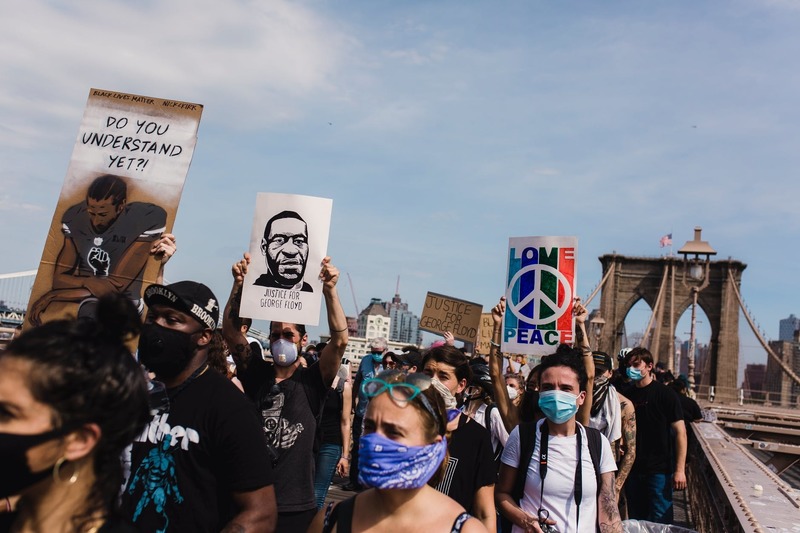 Photo by Life Matters via pexels.com

When I saw the video of George Floyd being killed by Minneapolis police officer Derek Chauvin, it was as if the entire 400-plus year mistreatment of African Americans in North America had gathered and descended into one single moment: a man had his life’s breath literally squeezed out of him, on camera.

The film ricocheted around the globe in a matter of moments. But I did not anticipate the Krakatoa-like eruption of protest and rage that we have witnessed in the United States and around the world. In the responses from fellow citizens, politicians, corporations and other organizations, it was as if a cry — by so many, for so long — was finally being heard. It was as if the laws of consciousness, and social conscience, had been altered by a single event that changed everything.

While I am not entirely convinced that this reaction will lead to sustained change, I’ve tried to ascertain what has driven this moment in American history and to think about what it might mean.

I was struck by how many whites took part in the protests — particularly, but not only, younger whites. (And I have wondered if more older whites might have come out if not for the safety strictures imposed by the pandemic.) And I think, most truly, that the video of the killing of George Floyd was the most significant moment in the racial life of the nation since the assassination of Martin Luther King, exceeding even the election of Barack Obama. What we saw so clearly on that film cannot be dismissed.

Perhaps it was the moment when large numbers of white Americans finally recognized how police violence impacts African Americans: they witnessed, on film, George Floyd’s death and were forced to contemplate its metaphorical and moral resonance. Perhaps they saw the embodiment of the American state and, by association, some representation of themselves, in Chauvin’s knee. Perhaps, in that moment, millions recoiled in horror.

What we may also be seeing in the protestors is disappointment. We should remember that young people from all groups can be fairly described as the children of Obama: they saw him elected president, after having been brought up on the stories of Rosa Parks, Martin Luther King and Bobby Kennedy. Even more than those of us who were alive during the Civil Rights Movement, these young people seem to have truly hoped, truly believed, that the worst of America was behind us, only to see it roar back into their consciousness, and consciences, in the most vivid and heartbreaking fashion. Perhaps, white and black, Asian and Latino, Native and Asian Pacific, they are saying — screaming — enough.

Perhaps cracks in the segregated order, once so ruthlessly maintained, are part of the change we are perceiving. Many whites now know a black person, a neighbor or co-worker. The increase in marriages between whites and people of color also has to be a factor. Many white people now have a black relative — a spouse, brother-in-law, sister-in-law, grandchild, niece or nephew — someone they love and cannot abide being mistreated. I think of how, maybe, some of those people thought of that loved one when they saw George Floyd annihilated in the middle of the street in broad daylight.

I think about my goddaughter, how 50 years ago she never would have been allowed to spend the sort of time she has with me. Think about it: a beautiful young white girl sitting up to 2 a.m. watching movies and talking about life with an older black man? And I think about the love and intimacy she has developed with my daughter. Maybe that is why she was out in the streets each night, participating in protests against the advice of her elders, including me.

And I think about how that young lady’s father, growing up in an all-white community, first became interested in African Americans. He grew to love the Syracuse and Denver Bronco football great Floyd Little, his childhood hero who warmly greeted the little boy when they met. Bringing blacks into sports has been a part of our nation’s growth and change. In this fashion, I do not think it is too fanciful to speculate that Michael Jordan’s omnipresence in our media and imaginations in some ways created the possibility, made space, for the presidency of Barack Obama.

Another factor now is that blacks know so much more about what happened and what is happening. We are aware, for example, of the 1921 Tulsa Race Massacre, where a frenzied massive mob of white men burned a middle-class black neighborhood to the ground and murdered hundreds of black citizens to “keep them in their place.” We know about redlining. We know the statistics on the racial disparities in policing, economic opportunities and healthcare outcomes for African Americans. In an irony of the times, as we have become educated and able to study, all while we have been locked out of the economy by systemic discrimination, we have come to understand more clearly what we are up against, which is, again, not just active MAGA and alt-right disdain and hostility, but also a generalized amnesia and “out of sight, out of mind” everyday reality. And we are aware that the wider society has a need to construct narratives of our supposed criminality and unfitness in order to justify the status quo.

Perhaps now we have come to a place where a plurality of whites can contemplate and confront the reality that moving forward is going to cost something more than lip service, and they can begin to think about what that might mean. That race is going to have to enter their consciousnesses and become part of their everyday thinking in the same way it is for people of color, and especially for African Americans.

And then, as American whites perceive these realities, perhaps they will be able to do something about them. And then, perhaps, they will not have to witness again the manifestation of violence that terrorizes our society. But I’m not sure if even the most open and noble hearted of them can do it, because it will require of them psychic space, intellectual capacity and will to endure change that will include breaking down our nation’s baked-in and assumed white supremacy.

“White supremacy” is a difficult phrase to contemplate in our society because it brings to mind Nazis and Afrikaners, the Holocaust, massacres of Africans and Hindus, and even in our nation, slavery and the genocidal treatment of Native Americans. It can’t, I think most white Americans believe, refer to our seemingly anodyne society of democracy and capitalism where those who try hard are rewarded according to their talents and drive.

I notice the resistance of many to the phrase “systemic racism,” as if there are not systems in the United States that determine, often decisively, what opportunities are available to individuals based on their color or zip code where they were born. If these systems of supremacy are not vital to the maintaining of white dominance, why else have they been so assiduously, so violently, maintained in the banking, educational and real estate systems? And why do so many whites of lower economic and educational caste and attainment so vociferously try to maintain the lines of demarcation, often voting against what many observers perceive to be their economic and demographic interests?

In the video of the murder of George Floyd what was most disturbing to me was not Chauvin himself, it was the other three officers who did nothing — who, in fact, either aided in the killing or prevented civilians from intervening; they literally turned their backs on George Floyd’s suffering, his pleas for help and mercy. That is the police culture, embodied in Minneapolis by the president of the police union, Robert Kroll, who tried to smear Floyd in death, and who has made a career of threatening and thuggish pronouncements and preening. (Kroll himself has received 30 complaints over his career as an officer, including accusations of racial slurs and excessive force).

Police culture and attitude must change. When the face of the state that most African Americans encounter on a regular basis is so callous and disrespectful, any hope of beginning to reconcile as a nation will have to start there.

And it can — reforming law enforcement is possible. In much the same way that whites of goodwill have begun to stand up with people of color and say, things must change, this is not who we are, so must that portion of officers who truly want to serve and protect, not humiliate and dominate, begin to demand that all police adhere to a proper standard.

With smartphones and social media, wrongdoings cannot be hidden. One tactic of white supremacy has been maintaining a monopoly on what was “true.” Police could not, under any circumstance, be criticized. (The most egregious example was the controversy after Obama said an officer in Cambridge, Massachusetts, responding to a 911 call about a break-in, “acted stupidly” in arresting a well-known African American Harvard professor at his own home.)

We should reflect upon the treatment of Colin Kaepernick for peacefully protesting police violence and racial inequity with a gesture that some officers are themselves now using. NFL commissioner Roger Goodell has admitted, without mentioning Kaepernick, that the league should have listened to protesting players. Kaepernick’s gesture had reminded some whites that all was not well — not everywhere, and not for all — so they wanted it silenced, and it was.

What is at stake is the fate of our nation. We have seen, in 9 minutes of footage, the refutation of our founding premise that all humans are truly created equal. And, as always emerges in the wake of unimaginable experience, we must ask: After such knowledge, what wisdom?

Anthony Walton has contributed to the magazine for more than 20 years. He lives in Brunswick, Maine.