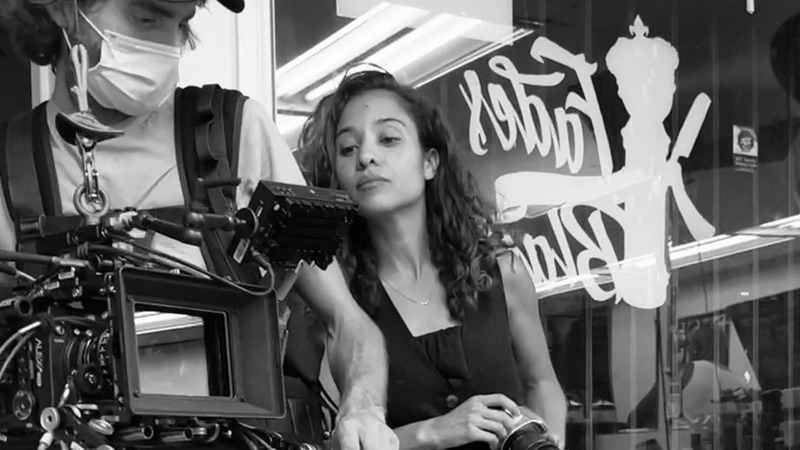 A couple sits in a car stalled on a jammed highway in Los Angeles. The radio is on, and a newsperson announces: “The curfew will go into effect at approximately 10 p.m.” With a helicopter whirring overhead and a siren in the distance, the couple listens as the announcer relays government plans to respond to an influenza pandemic.

With a few details changed, this tableau could have played out in any American city in 2020. But the scene from the independent thriller Before the Fire was conceived long before COVID-19 upended the world. Directed by Charlie Buhler ’10, the prescient film was released in March 2020 — just as the United States was going into lockdown.

“It was really bizarre to see the ways in which truth is stranger than fiction,” says Buhler, who collaborated on the film with Jenna Lyng Adams, a friend who wrote the screenplay and played the lead role. “We never could have predicted how it would feel to have the whole world in lockdown.”

A filmmaker living in Los Angeles, Buhler, 34, pursues the kind of projects she wishes Hollywood would take on more often: stories about people and communities that break outworn molds. She draws upon her background growing up biracial in a mostly white part of rural South Dakota, where she rarely felt she saw her experiences reflected on movie screens.

She has found success in a white- and male-dominated industry that is notoriously difficult to break into. The secret? Make your own movie, she says.

That’s how Before the Fire came to be. Buhler and Adams didn’t want to wait for someone to greenlight an idea and give them resources to make it into a film. “As a woman and person of color, I knew that I was never going to get the opportunities that I wanted, in terms of being able to direct, unless I made them myself,” Buhler says.

She tapped her networks to fund the project with small investments and donations, then worked with Adams to create a script that would use the resources they had at hand. Buhler’s grandfather owned a farm in South Dakota, where they chose to set most of the movie. The farm even had a structure her grandfather planned to demolish by burning it down — a ready-made set piece for the titular fire.

Buhler wanted to shoot a film with a post-apocalyptic feel. And the main character would flee L.A. for South Dakota. “What would cause the whole world to come to a standstill but also be invisible, i.e. cheap?” Buhler recalls asking. “What would be safer in South Dakota than Los Angeles?”

They settled on a virus.

During the early days of the coronavirus, Buhler had the eerie feeling of watching Americans follow many of the same beats that occur at the beginning of her film. But the virus also created an appetite for pandemic-related content, and a distributor acquired the movie. The result is now streaming on Showtime and other premier services, an achievement that’s helped Buhler get an agent and gain access to resources and people she needs to keep moving forward.

“As long as you put one foot in front of the other and keep making things . . . eventually you find a way to the other side,” she says.

The long hustle was not a career path Buhler always envisioned. She entered Notre Dame as a pre-med student. Her medical aspirations lasted one day, she says with a chuckle: She knew she could do the work but didn’t love her chemistry class. Meanwhile, a film course she took to fulfill a fine arts requirement captured her heart.

From there, Buhler’s is a classic story: She moved to L.A. after graduation, did some commercial acting and worked in a Hollywood bar. At times she felt unmoored, wondering whether she was putting her degree to its best use. But, as she puts it, there is “no un-useful job.”

“I learned so much about the world and have the best stories from the time I worked at that bar,” she says.

With the momentum of her feature behind her, Buhler recently completed Rosebud, a documentary that follows hip-hop artists on the Rosebud Indian Reservation in South Dakota. She heard about the musicians through a stray comment from her father, who is a doctor on the reservation. Hooked, she found several musicians on Instagram and listened to their work on Spotify. She messaged a young artist to see if she could spend some time with him.

The director wants to depict a South Dakota that “defies preconceived notions” about life and communities there, she says. “I think youth culture on reservations is so overlooked.”

Looking ahead, she hopes to break some barriers to make it easier for women and people of color to come into the film industry. She tells students to find ways to make their own content and take advantage of resources they have in school.

“The work is hard enough, but when you have to do the work swimming upstream against friction that has nothing to do with the work, that becomes a problem,” she said. “If I can pave a path that removes some of that friction, that will be successful for me.”

Madeline Buckley is a reporter for the Chicago Tribune.