My father was always spare with his advice, believing that the less that’s given, the more impact it would have. On the eve of my marriage, he advised me that women often see the world different from the way men see it — neither better nor worse; just different. There would come times when, despite our best efforts, my wife and I would simply not be able to see things the same way, and trying too hard to convince the other in those situations would only lead to unnecessary frustration. It would be better then to just accept the legitimacy of the other’s views as being equally valid. That was his way of saying that a key to a successful marriage is mutual respect, most importantly when there is disagreement

My father was a big man, 6-foot-3, with a barrel chest, a thick neck and over 240 pounds of muscle. He was the grandson of black slaves. He met and fell in love with an Italian-American sales girl. When he proposed to her, she accepted on the condition that he get a “good, steady job,” as marrying a black man in the midst of the Great Depression was challenge enough, without the uncertainty of whether he would be able to provide for her. With that as incentive, he took and passed the test for the New York Police Department, where he became one of its most decorated officers.

In 20 years on the force, working in some of the most dangerous neighborhoods in the city, my father never discharged his weapon, despite having arrested armed men on multiple occasions — exploits that earned him several commendations for heroism, and membership in the NYPD Honor Legion. When asked how he was able to do this, he would reply, “I was just lucky.” But it was more than that. On several occasions, he subdued armed men rather than shooting them — he once overpowered a man who’d leaped down a flight of stairs and slashed my father’s neck with a knife before my father restrained him. The simple fact was that my father took his oath as a peace officer seriously and put a high price on human life — perhaps an unreasonably high price, given the number of times he put his own life in jeopardy. 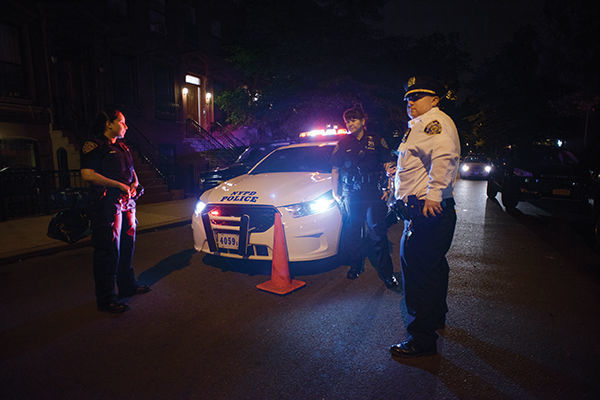 I share these facts to explain my reverence for police and for the selflessness with which the vast majority perform their everyday and sometimes dangerous duties. I am reminded of them in the context of the controversy over the Black Lives Matter movement, the tragedies of police shootings of black men, and the cold-blooded murder of police officers in several cities. As the product of an interracial marriage, my ears are particularly attuned to nuances in discussions of race; lately, I have begun to despair that, as much as each side is talking to the other, neither side is listening.

As in a failing marriage, each camp is desperately trying to convince the other of the righteousness of its position. Allies of the police point out the dangers and difficulties of a job that forces police to deal with the consequences of centuries of overt suppression, and decades of inadequate and sometimes counterproductive public policies, and to do so armed with limited resources and training, and inadequate community appreciation and support. On the other side, advocates for Black Lives Matter point to the growing body of visual evidence that seems to support a longstanding tendency toward the use of excessive and often deadly force by police against African Americans, even against those who provided no provocation.

Rather than promoting understanding, passions are too often intensified by the insensitive statements of public figures like former New York Mayor Rudy Giuliani, who accused the BLM movement of being “inherently racist” in not acknowledging that all lives matter, and that “Black Lives Matter never protests when every 14 hours somebody is killed in Chicago, probably 70 to 80 percent of the time [by] a black person.” Or like political commentator Bill O’Reilly, who said on the air, “They’re a hate group. And I’m going to tell you right now, I’m going to put them out of business.” It apparently doesn’t register with O’Reilly that, while the murder of anyone is beyond tragic, there is something uniquely tragic in the death of a citizen at the hands of an agent of the government charged with their protection.

In July, Fortune Magazine reported on remarks by Senator Tim Scott, a conservative Republican from South Carolina, and one of only two black United States senators. Scott shared with his fellow senators his personal experiences in being repeatedly stopped and scrutinized by police, including one in which a Capital Police officer apparently had difficulty believing he was a senator.

Scott reported that he had “felt the anger, the frustration, the sadness and the humiliation that comes with feeling like you’re being targeted for nothing more than just being yourself,” and then went on to ask his colleagues to “recognize that just because you do not feel the pain, the anguish of another . . . does not mean it does not exist.”

Acknowledging these feelings is in no way to condone the cold-blooded assassination of police officers. As President Obama has properly noted, an assault against police officers is a direct assault against all Americans, of every race. And there is no question that a small minority of BLM marchers have carried signs and yelled slogans that are, at best, as intemperate as Giuliani’s and O’Reilly’s, and, at worst, may be taken as a call for violence against police.

Leaders plead with us to talk forthrightly with one another, in the hope that it will lead to greater understanding and acceptance on both sides. Perhaps, instead, there has been too much talk and too little listening.

My point here is not to equivocate between the two sides. Though neither is blameless, I am more offended by the negative statements of current and former public officials and media personalities with audiences in the millions. Their authority and influence demand they should calm rather than inflame passions — and be held to a higher standard than young demonstrators who speak in hyperbole.

What is more depressing is that there can be a lack of understanding and commonality of perception even between two public servants as dedicated and respected as Secretary of Homeland Security Jeh Johnson and NYPD Commissioner Bill Bratton. They recently appeared together on a Sunday morning Meet the Press program to make a joint appeal for unity and mutual respect between police and the black community. Yet even the statements of these two sensitive public servants illustrated the chasm they pleaded for closing. At the end of their segment, Johnson was asked whether he, as a black father, had given “the talk” to his son — the warning black parents give their children not to expect equal treatment from the police and to avoid anything that might justify an aggressive response in their interactions with police officers. Secretary Johnson appeared startled, paused for a split second and answered with obvious discomfort, “Yes, and I think I’ll leave it there.”

Bratton interjected to warn that anyone in an encounter with police should, whatever the circumstances, immediately comply with police directives. Of course, Bratton was correct, and those who fail to do so subject themselves to lawful (and sometimes unlawful) consequences. But Bratton’s defensive interjection undercut the spirit of mutual understanding and respect that he and Johnson had sought to establish in their previous remarks, and instead underscored the contrasting experiences and perceptions that can exist between the police and the black community.

All of this is to say that the public dialogue on matters of race can sometimes resemble an attempt at communication between species from different worlds, with fundamentally different existences that render each incapable of understanding the other’s frame of reference. Leaders plead with us to talk forthrightly with one another, in the hope that it will lead to greater understanding and acceptance on both sides.

Perhaps, instead, there has been too much talk and too little listening.

It may well be that despite good intentions, the outlawing of overt discrimination and the eloquent exhortations of our first black president, the life experiences of blacks and whites in America remain so fundamentally distinct that it is impossible to completely see these things in the same way. And it may be, as my father warned me on the eve of my marriage — marriage being an apt metaphor for the indissoluble relationship among the races in America — that the very struggle to achieve the common understanding that eludes us is intensifying our frustrations. Maybe what we need is to stop trying to get each other to agree, and instead to seek mutual acceptance — of who we are, of the uniqueness of our experience, of the validity of what we feel. Maybe acceptance can be more powerful than agreement.

Christopher Lowery retired in 2009 as CEO of Global Capital Markets & Principal Activities at Cushman & Wakefield and is working on a book about the trends that led to the 2007 financial meltdown and the Great Recession.