Olivia Godby ’16 once spent four hours pretending to be a cat, meowing as people walked by. Not your typical high school student’s summer activity, but Godby was a counselor at a camp for those with developmental disabilities and that playful diversion was all one camper wanted to do. “It was so fun,” she confesses. 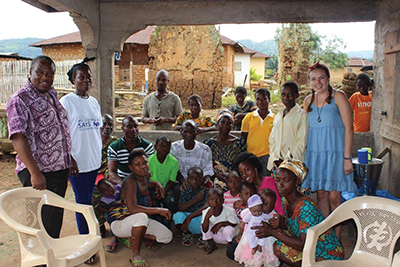 Volunteering at the camp and with Special Olympics, says Godby, made her passionate about supporting those who might be unable to speak on their own behalf. “It makes me sad that people aren’t able to see what they offer,” she says. “To advocate for them is my responsibility and my joy.”

That advocacy took an international turn during her freshman year at Notre Dame, when Godby read an article that detailed serious abuse of those with mental disabilities in Ghana, West Africa. “I thought, ‘I have to go and see for myself,’” says the energetic woman whose words trip over themselves as she talks. So instead of heading home to Sacramento, California, at the end of her freshman year in 2013, Godby used a grant from the University’s Kellogg Institute to spend seven weeks as part of an Inclusion Ghana team, researching the obstacles to health care for people with intellectual disabilities.

Among her interviews with health care professionals, guardians of those with intellectual disabilities and those with disabilities, one story of heartbreaking irony stunnned her. A woman named Patience said her 22-year-old son, Richard, disabled by cerebral palsy, had not seen a doctor in more than 10 years because he was unable to walk to the nearby health clinic, where his care would have been funded by the Ghanaian government.

As Godby and her research teammate prepared to leave, Patience asked whether they could get Richard a wheelchair. They had to tell her it was not logistically possible.

“I was only 19,” Godby says. “I thought, ‘Why is this so hard?’ I learned really quickly that things we take for granted in the U.S. are a lot more difficult in Ghana.”

Back at Notre Dame, feeling “helpless and overwhelmed by what I had seen,” a distraught Godby used friends, creative writing and songwriting to work through her emotional upheaval. A counselor suggested she channel her empathy into something productive. The advice resonated with Godby. “I decided: be upset about how the world works . . . or at least do something even if only for one or two people.”

She chose to do something. As a junior, aided by several Notre Dame professors, Godby created a nonprofit organization. The Patience Project debuted in January 2015 with a mission to “provide mobility equipment, physical therapy assistance and surgery funding to children with intellectual and physical disabilities in Ghana.”

Unable to directly oversee the project’s work, Godby partnered with Kekeli Ghana, which also assists young people with disabilities. That group does not cover medical expenses, she says, so The Patience Project “fills in the gaps they are not able to support.”

In the summer of 2015, Godby headed back to Ghana with a heavy heart. Shortly before she left, she learned that Richard, whose need for a wheelchair had kicked off The Patience Project, had died. Visiting Patience and sharing memories of Richard, she says, helped ease her grief.

It helped, too, that the trip, and two more in 2016, showed Godby the results of her charitable efforts — including a rambunctious boy called Courage being fitted with equipment that would make it possible for him to walk.

Those visits also motivated her to “think in a broader context,” to develop a sustainable goal. At the base level, she says, the project will continue fundraising “to support everyone we’ve already committed to.” It currently covers yearly medical expenses for 30 children in the Volta Region of Ghana.

More comprehensively, the project will seek to expand the number of physical therapists in the region. “Giving someone a piece of equipment but no information on how to use it is not very helpful,” says Godby.

Since her graduation from Notre Dame, the 22-year-old has been traveling, working on her music and dedicating time to The Patience Project. She intends to sign up for chemistry and biology classes so she can apply to graduate programs in naturopathic medicine. “Now, I’m someone who cares a lot,” says Godby. “When I return [to Ghana], I’ll have more knowledge about the human body.”