Throngs of fans — kids mostly — hung over the metal railing above the hallowed Notre Dame tunnel screaming for the attention of the new Irish starting quarterback, DeShone Kizer.

Though Notre Dame had just handily beaten the UMass Minutemen, the players — including Kizer — weren’t celebrating as they made their way through the tunnel toward the locker room. They maintained the focus they’ve mastered on the field, tuning out the commotion as countless hats, jerseys, footballs and Sharpie pens were thrust at them along with pleas for the players’ attention. 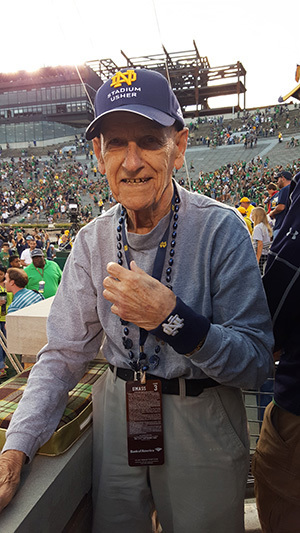 Then, in a “blink and you would have missed it” moment, one of the players broke from the pack and ran back to an older man standing quietly in the first row, right next to the tunnel.

Kizer handed the man something, and was gone.

“He gave me his wrist band,” Stanley Weber says moments later, trying to appear nonchalant about the treasure. And then he does what any Irish fan would do: He puts it on. That’s when the smile widens across his face.

Kizer’s wrist band will go into Stanley’s extensive Notre Dame memorabilia collection, which includes the gloves Manti Te’o wore during Notre Dame’s memorable victory over Stanford during its undefeated 2012 season, old helmet chinstraps, even a referee whistle. Also part of the collection: scrapbooks of every article from the South Bend Tribune and other publications, and an archive of the typed play-by-play reports for every single Notre Dame game since 1950.

But even that’s not the most precious gem in Stanley’s collection. That distinction belongs to the photo album that contains the ticket stubs from the 410 Notre Dame games he has attended.

At age 91, Stanley Weber is no mere Notre Dame football fan. He’s more of a connoisseur. He has studied the coaching strategies of Leahy, McKeever, Devore, Brennan, Kuharich, Parseghian, Devine, Faust, Holtz, Davie, Willingham, Weis and now Kelly. He has seen every one of Notre Dame’s Heisman Trophy winners live in action on the gridiron. And since he purchased season tickets in 1950, he has only missed one home game: the November 8, 1975, battle against Georgia Tech in which a walk-on named Daniel “Rudy” Ruettiger ’76 made his first and only appearance.

Missing that game wasn’t by choice — Stanley was hospitalized after suffering an aneurysm. The doctors refused to discharge him, stating they needed to keep him for observation through the weekend. Stanley refused, telling the doctors how he and his wife, Ann, had been to all of those games together and needed to be at this one, too.

Ann’s love for Stanley was greater than her love for Notre Dame. She took his clothes and shoes home so he couldn’t leave the hospital. Stanley was livid. According to their only son, Tom, it almost caused his parents to divorce.

Stanley is not an alumnus but he remembers the year he became a Notre Dame fan. It was 1929, and 5-year-old Stanley began listening to the games on the radio with his older brother. As he sat on his father’s lap, Stanley watched his brother sketch out the diagrams of each play.

When he was 17 he first realized his dream of watching the Irish from the stands of Notre Dame Stadium. The date was November 22, 1941 — two weeks before the bombing of Pearl Harbor — and Stanley watched Coach Frank Leahy lead his team to a 20-18 victory over USC.

Shortly afterward, the United States military came calling for Stanley, drafting him into the Navy as it battled World War II. Stanley was assigned to the submarine force, stationed in the Pacific and discharged a few years later.

After he left the military, Stanley made two commitments. The first was to marry the love of his life, Ann, in 1944. The second was to become a Notre Dame season ticket holder in 1950. 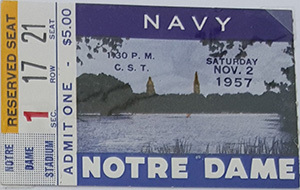 The Webers began making the 382-mile round trip from their home in Tiffin, Ohio, to watch the Irish play. Before long they accompanied their son to Notre Dame as he began his freshman year. Tom graduated with top honors in 1966.

Stanley and Ann continued their routine each season up until 2004, when Ann’s health began to decline and the games were too difficult for her to endure. Stanley was prepared to give up his tickets, but his great-nephew, Joe Fretz, couldn’t bear to see that happen. He volunteered to be Stanley’s game buddy and designated driver. Stanley welcomed the offer.

On football Saturdays, you’ll still spot Stanley and Joe in the first row of Section 1, right next to the tunnel, rain or shine, blazing heat or snow. And, proving that you never too old to be an Irish fan, Stanley takes every opportunity to ask for souvenirs from the players — only he does it before the game when they are heading out for warm ups. “I know that when they promise to give me something after the game, they’ll come through,” he says.

And they do come through. Just like Stanley does, every season.

Angela Sienko is an assistant director of marketing communications in the Mendoza College of Business. A nine-year volunteer at Irish home football games, she met Stanley Weber while serving as a stadium usher in Section 1.