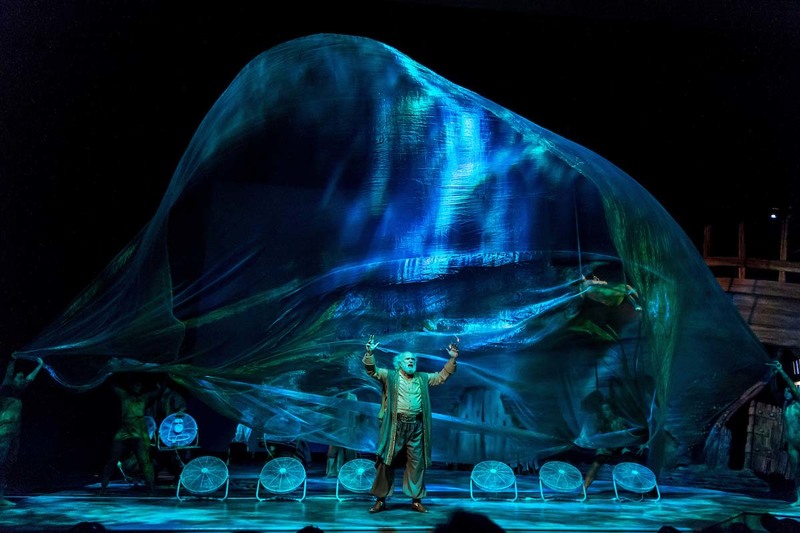 It’s the middle of July and the campus at Notre Dame feels like a deserted island.

Nick Sandys and I are talking in the lobby of the DeBartolo Performing Arts Center about the upcoming presidential election. Every day, media outlets fire off salvos of scandal and spectacle to reveal and reinforce social divisions. Many observers feel trapped by political choices made all the more distressing by events, often brutal and short, which seem to fall thicker and faster than anyone can control.

“We’re in a tempest right now,” he says, looking a little bruised.

Sandys (pronounced “sands”) will play the part of Prospero, a powerful magician, in the Notre Dame Shakespeare Festival’s much-anticipated production of one of Shakespeare’s last plays. He certainly looks the part: lithe, scholarly, bearded, beset by cares. He brightens when I ask him what The Tempest is about. With a Ph.D. in literature and long experience on the stage as an actor and director, he’s eager to dive in.

“It’s a revenge play,” he explains. “We’re just not seeing the first three acts.” Prospero, former Duke of Milan, has been usurped and exiled to a remote island he now controls. Suddenly, thanks to a shipwreck, he has an opportunity to punish his enemies. “Imagine his feelings,” Sandys says. “He has spent 12 years seething. He’s hanging on to those feelings and his books. But how do you grieve? How do you process? He hasn’t.

“Then he learns, with the help of others like Ariel, his servant, that he doesn’t understand. He’s astounded, actually, when people act nobly and surprise him. He even surprises himself.”

Sandys pauses to imagine the situation 400 years ago when Shakespeare wrote this remarkable script at the age of 48, four years before his death in 1616. Staged for the first time at Whitehall Palace for the court during an outbreak of the plague, and incorporating a grand celebration of a royal intermarriage, the script shows a clear interest in the moral dimensions of power and spectacle.

Having made a career out of dramatizing how humans fight to create and maintain social stability and status, Shakespeare could have become the world’s most articulate cynic. Instead, in this late work, the powerful Prospero learns that he has to start learning again — and even to forgive.

Nick marvels at the change. “It’s a huge emotional journey.”

The question of how to tell that story came up 18 months ago when Grant Mudge, NDSF’s producing artistic director, was considering The Tempest as part of the festival’s series entitled “Shakespeare’s Last Words.” Thinking it would be interesting to present the tale with magical stage effects such as “an airborne Ariel,” Mudge called West Hyler, whom he knew and trusted from the exceptional work Hyler had done with the NDSF’s Young Company in years before.

Mudge also had in mind Hyler’s work with some of the world’s premier circus athletes, and with that spectacular ring of artistic athleticism, the NASA of circuses, Cirque du Soleil.

It was an inspired choice.

For someone with that level of experience in the circus ( Paramour ) and on Broadway ( Jersey Boys ), Hyler does not present himself like the stereotypically manic director, stamping his foot while clapping everyone to attention. Instead, he slides into the chair across from mine with an easy smile. Like Sandys, Hyler combines a literary background (in classics) with training in the martial arts.

“In the Cirque,” he explains, “what humans can do reaches this razor-thin, peak level of what we can achieve physically as a species. It’s the elite, the very top. But what I’ve found from experiment is that you have to bring verbal dialogue to that same height in order for their combination to work. Otherwise, the circus’ physicality would detract. I’m looking for that balance.”

In this production of The Tempest, Hyler is conjuring with physical elements never before seen on a Notre Dame stage. At his recommendation, the NDSF hired Daniel Wurtzel, an “air designer,” whose paper tornado took center stage at the closing ceremony of the 2014 Sochi Winter Olympics. They also hired Sarah Scanlon, an actress, gymnast and musician with training in the Russian ballet to play Ariel, Prospero’s genie-like servant.

Scanlon is someone who can spend nearly two hours beautifully suspended above the stage on a metal bar trapeze. While I talk in the lobby with Hyler, she passes by with a heavy backpack. When she finally sits down without it, I ask her about the demands of her role.

“It’s a dream project,” she says, looking both serious and sly. Her role allows her, she says, to bring a “physical vocabulary” to the table as an additional means of heightening the story itself. She will spend her part in the play balanced, without a net, some 30 feet above the stage, often in motion, and playing an oboe. How does she manage? “As long as my feet are not touching the ground, I’m pretty graceful,” she says with a laugh.

What in Ariel’s story needs to be heightened? “Freedom,” Scanlon replies, becoming firm. “She is Prospero’s servant, and the real maker of illusions in the play, but her main objective is for freedom. Though she is not really a she — or a he. Ariel is kind of Spock-like but has moments of real empathy and compassion. And even though she or he has more craftsman-like pride than, say, Puck [in A Midsummer Night’s Dream ], she constantly needs and asks for Prospero’s approval in order to be freed.”

Scanlon is moved as she reflects on this. “Ariel will go anywhere, do anything, to feel the ground again,” she continues. “And being in the air, and then on the ground, it’s such a powerful metaphor . . . there will come a moment in the play when I touch down and don’t even have to act the feeling of relief.”

But what makes that movement between above and below so moving?

“The humanity of the audience,” Sarah says, “is real for us. In that moment when the play is going on, we are creating the experience in that room with them. We are building real things, in the same space, sharing this energy, which is undeniable. There is also direct address in the play, when actors talk to the audience. Their experience is just as real as ours. The whole experience is so collaborative, so viscerally powerful.”

Costume designer Jeremy Floyd agrees. In a gray labyrinth below the stage, he is wearing a lab coat and holding up a pair of deformed human hands: prostheses for the costume of Caliban, the former master of Prospero’s island. Floyd’s team is “experimenting with kelp.” Has technology given them new powers? The question strikes him as strange. “The illusion on the stage comes from the audience’s interaction with the actors,” he explains. “Here, we just provide their shapes, their changing forms.”

Does he envy the power of CGI in film to create such illusions? “No!” Jeremy looks shocked. “The power of the stage is that things are real and tangible. The audience can say ‘I can actually touch that,’ it’s really there.”

Sarah Scanlon presses the same point. “Technology is great, and video is a very good diagnostic tool for performers, but this performance is ‘of the elements,’ like Ariel. The audience will be able to smell the chalk on my hands and say ‘OMG, I can touch that!’ It’s like a real-life video game.”

But even as it creates fantastic effects, The Tempest is ultimately ambivalent about spectacle. Nearly everyone in the play is imprisoned by illusions, Hyler reminds me. Breaking free of them requires something beyond violent struggle and a desire for retribution.

The stage effects in this year’s production are, in a word, spectacular, and it would have been easier to write about their physical, magical beauty. Prospero himself calls the action and resolution of the play “a most high miracle.” The costumes, lighting, language, and special effects all reach toward that level. Such a performance will elevate NDSF, associate director Aaron Nichols says, “to another tier.”

But the deeper, more moving thing is that somehow, right now, The Tempest is about all of us. In addition to bringing Notre Dame once again into a world-class network of actors and directors, one can see in this play the same struggles for freedom and control in our tempestuous world, the same fights for status and power, the same riot of unfolding plots, both comical and deadly serious, and the same sensual, tantalizing illusions. Our young people find they have to struggle hard to maintain faith and to develop sufficient trust in each other to carry the world peaceably into the future. But “do not infest your mind with beating on the strangeness of this business,” Prospero advises.

In this Year of Mercy — with, no doubt, more violent storms and illusions to come — we may have plenty of opportunity to reflect with Prospero and his rivals that the only way out of the trap of a charade is to allow a deeper reality to shape the content of our character.

There will be 14 performances of The Tempest in the Decio Mainstage Theatre from August 16 to 28. Tickets for those 18 and under are free.

A.P. Monta serves as the Associate Director of the Nanovic Institute for European Studies at Notre Dame.