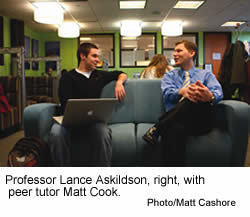 Lance Askildson grabs a black-and-white photograph from a shelf.

The image of a row of stark, empty carrels filled with little more than the customary headphones serves as a reminder of the isolation and frustration many people still associate with foreign language instruction.

In fact, the University’s new high-tech home for language study, located in DeBartolo Hall, has the look and feel of a hipster coffeehouse. Glossy magazines with titles such as Hiragana Times and ¡Hola! are strewn across table tops. Students sprawl out with their laptops in open booths and couches. There’s background music and a 60-inch flat-screen television; laughter and conversations in French, Italian, even Chinese.

Since opening last January the center has become the nucleus for the College of Arts & Letters’ plan for advancing foreign language learning at the University. Students can get their daily news in Arabic, watch a German film or socialize in Greek.

The center matches language students with peer tutors, learning partners and international students. It hosts in-house debates on cultural topics spoken in the relevant foreign language and is the hub of the University’s collections of foreign language software, literature, periodicals, film and audio.

“The design is specifically situated to get people to interact,” Askildson says. “Some of that interaction is very structured and some of it is purposefully unstructured. The philosophical role of the center is to become the home for language study. It’s already the physical, spatial home, but we want it to be the emotional home as well.”

Formerly the assistant director of the Center for English as a Second Language at the University of Arizona, Askildson specializes in second-language acquisition. He says he was attracted to Notre Dame because of the support he found on campus for a broader push toward internationalism.

Much of that push comes from John McGreevy, the I.A. O’Shaughnessy Dean of Arts & Letters, in response to the frustration he says he’s seen among students who “felt they were not getting anywhere,” especially in first- and second-year language courses.

“We realized we needed to move to three, four and in some cases five-day-a-week classes so students could get to a point where they could start using the language,” McGreevy says. “People like to think we’re a monolinguistic country but that’s just not true anymore. We have 40 million Spanish speakers in the U.S., which makes us one of the largest Spanish-speaking countries in the world. Add Catholicism, which is such a multilingual institution, and you start to realize that language is in some ways part of our DNA. I think as a university we’ve begun to recognize that.”

In addition to course schedules, there have been several other curriculum enhancements, including pre-study abroad courses for credit, a peer tutoring program modeled after a similar program at the University Writing Center, and the Language Across the Curriculum program, which encourages advanced language students to, for example, read materials in French or Spanish for a history course.

The University has also invested in classroom voice recording technology that can be used for oral exams, allowing faculty to evaluate, record and send corrected pronunciations back to the students without taking away from class time.

Additionally, Askildson approached several University foundations for matching grant money to send as many foreign-language students abroad as possible. Last summer, he says, the program received 122 applications and awarded support to 54 students to study overseas.
In order to measure progress in their language skills, grant recipients were given an oral language test before they left and after they came back — the same test the U.S. State Department relies on to measure language proficiency before sending staff overseas.

“Most students made incredible leaps in language proficiency,” Askildson says. “We had students in the Chinese program who were in their second year when they left. When they came back they tested the equivalent of fourth-year Chinese.”

Recognizing the value of immersion, the University now allows students who test higher than when they left to move directly to upper-level courses.

Both McGreevy and Askildson believe the addition of the center and the curriculum changes have made language study more attractive to both current and incoming Notre Dame students. In the past three years, enrollments in Irish have nearly quadrupled. Formal programs in Korean and Portuguese have been introduced to the curriculum. And Arabic, where enrollments have jumped more than 650 percent in the past decade, is now offering advanced courses.

“The fastest growing are Chinese and Arabic, but we’ve had growth in all of our 14 languages this year,” McGreevy says. “That’s a little bit against the national trend.”

The Center for the Study of Languages and Cultures is at the heart of that growth. When it opened last spring, it welcomed about 120 students per day. This past fall, the number surged to 450 students per day, far exceeding Askildson’s expectations.

Much of that draw comes from the center’s use of new technology. The center has 35 laptops on which students can use Skype’s free Internet phone service to interact face-to-face in real time with students around the world. The 60-inch flat-screen television offers at least one channel in each language taught on campus. It was also used in a pilot program to offer a live, sustained, high-definition video connection that allowed Notre Dame students to have conversations with French counterparts studying English in Angers, France.

“High definition really makes a difference when you’re trying to learn a language and trying to have a cross-cultural interaction,” Askildson says. “You need to be able to see articulation movements of the mouth and facial expressions, and sound quality is very important.”

That personal connection, both on screen and in person, seems to be the center’s greatest learning tool. In addition to the casual connections, the center often pairs professional or peer tutors with students. There are weekly roundtable discussions to practice oral skills. For those who still prefer the old language-lab model, there’s a selection of Rosetta Stone software, too.

“I’m not saying you can’t learn a language by the listen and repeat method,” Askildson says. “Anything works. I can lock you in a room with a French book and eventually you’ll start to understand it, but what we’re doing now is all about efficiency. We get these students for a few hours during a few years of their lives. That’s why we want to give them the opportunity to explore the world and gain intercultural confidence that they can use for years to come. That’s why we need to explore every tool in the arsenal.”

Jeremy D. Bonfiglio is a South Bend-based freelance writer and the staff feature writer for The Herald-Palladium of St. Joseph, Michigan.