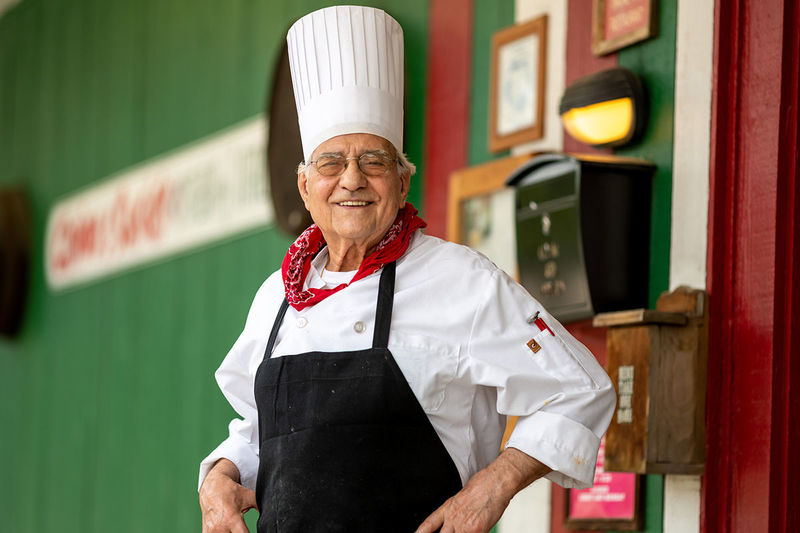 Cosimo Rulli asked if I could call him back the next day. Deliveries were coming one after another and he didn’t want to keep putting me on hold. That’s how things were going at Cosimo & Susie’s A Bit of Italy restaurant in May, just as Indiana’s economy stirred from coronavirus hibernation.

Even before the state started reopening activities like in-person dining, Cosimo’s handled a steady carryout business. By the time I talked to him, the dining room had been open for a few nights and — aside from his wife and fellow chef Susie Rulli’s relentlessness in distancing tables, distributing masks and disinfecting surfaces — the familiar rhythms had more or less returned.

Cosimo is 84 now, 30 years into his second career hovering over ovens with imperturbable patience in a flour-dusted apron. The idea of him leaving the kitchen was impossible to fathom, but if the circumstances offered anyone reason to retire, it would’ve been Cosimo. So I called the restaurant. And he answered.

Naturally he had continued to show up hours before it opened to customers, taking deliveries, preparing sauces, paying bills, running the 50-seat restaurant rooted in his mother’s traditional Italian cooking the same way he always has.

He used to manage movie theaters, including the defunct and demolished Town & Country in the shopping center of the same name, where Cosimo & Susie’s opened in 1989. That’s where it remains — and even though I’ve probably been there more than any other local restaurant, I didn’t remember until long into work on this South Bend issue that it’s actually in Mishawaka. The borders are blurry around here, and Cosimo’s is just across — a South Bend institution all the same, as far as I’m concerned.

Cosimo’s is a place for leisurely, indulgent dinners, dim and quiet enough for an intimate meal, boisterous and relaxed enough to reserve a table for a couple dozen and get a little rowdy. Just don’t be in a rush. “Slow food,” Cosimo calls his array of meticulously prepared Italian dishes and pizzas.

Classic film posters hang on the wall, along with those from more recent movies — like Big Night, the 1996 story of two Italian brothers who open a restaurant in America — knitting the threads of Cosimo’s professional lives together. He displayed another poster from his days in the theater business promoting “Revenge of the Jedi” — the working title of the 1983 Star Wars installment released as Return of the Jedi — that became such an object of curiosity he had to remove it from the dining room.

People are most interested in the food, from the decadent house salad dressing that could be served as a dessert to the pizza that my out-of-town father-in-law consumes with almost
cartoonish eagerness. Cosimo waves off the praise diners lavish on him during his rounds of the restaurant to say hello and ask after absent family and friends. He’s just happy to have customers to feed.

“Come on in,” he says, tempting me with the promise of my family’s usual order, a red pepper and garlic pizza.

His encouragement is as superfluous as my curiosity about what was happening at the restaurant during the pandemic.

Of course we’ll come in — and Cosimo will be there.