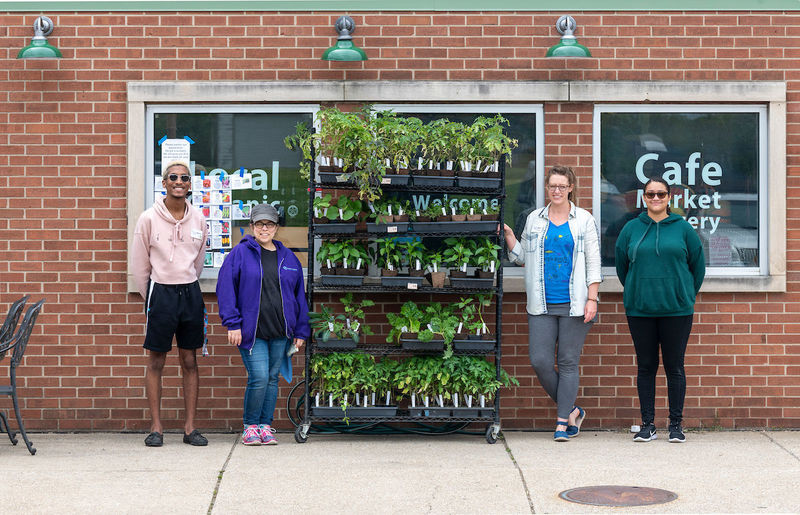 On any given Saturday morning, the hottest spot in South Bend isn’t a trendy brunch restaurant or the tailgate fields at Notre Dame Stadium. It’s the South Bend Farmers Market.

Spend more than a few weeks in the city, and you’ll discover that, when the weekend begins, a Farmers Market visit is downright required. You drive over to the decades-old facility, jostle for a parking spot and enter a crush of humanity you scarcely thought possible in a town of 100,000 people. You’ll probably run into an old classmate, or a friend’s mom, or both. You might spot a tattooed hipster with mustard greens poking out of her Bernie 2016 tote bag. You might find a Mennonite family shopping for pork chops and eggs. You’ll grab a bite at the café in the center, you’ll leave with a trunk full of local goods, and when you get home, you’ll probably tell your friends about your haul.

“I’m not quite sure why it is,” says Heather Smith, the purchasing manager at the Purple Porch Food Co-op near downtown, “but this niche market in South Bend is growing.”

The list of independent grocery and produce options around the city is surprisingly long. Amid all the Rust Belt industrialism is an urban farming network run by the nonprofit Unity Gardens, a Catholic Worker community with its own cooperative farm and farm store, and several independent markets dedicated to cuisines from around the world.

The kings of this local shopping scene, however, are “the Porch,” as regulars call the co-op, and its larger, entrenched forebear, the South Bend Farmers Market. Both draw shoppers from around the community and beyond, and the sites’ employees say three factors are key to their success.

First, as trendy as it may be these days to throw a reusable bag over your arm and stock up at a neighborhood farm stand, the concept isn’t new to these parts.

The South Bend Farmers Market was incorporated in 1924, says Jill DeLoddere, a member of the market’s board of directors, “so in a few years, we’ll be coming up on a hundred-year anniversary.”

The exact details and location of the market have changed some over the decades, but today, the climate-controlled space is open eight hours a day, three days a week throughout the year (four from May to September) — and it’s been more or less that way for most of the last century. That kind of longevity yields gravitas to a place, and, in turn, to the movement that a farmers market represents. In a typical Midwestern city, far from the hippie crowds that populate alternative food stores in Vermont and California, a cooperative grocery like the Purple Porch may have struggled to get off the ground. Here, though, was precedent for even the least bohemian of residents to appreciate their local food.

The Purple Porch began in 2009 as little more than a swap meet among friends interested in the cooperative model wherein “member-owners” pay a fee to support a grocery store in exchange for a share in its profits. They opened a retail space in 2014, and today, they’ve grown to more than 1,200 members and thousands more locals who shop at the store without ownership shares. The longstanding history of local food shopping in South Bend may account for some of the co-op’s success, but Smith believes there’s another factor, too.

“I think some of it has to do with where we’re situated geographically,” she says. “There’s just a lot of land and space here, so it’s really easy to find things locally.”

The market got a clout boost last year when Pete Buttigieg made it a regular backdrop for his hometown interviews.

The U.S. Department of Agriculture doesn’t define “local” food by any preset standard. But 40 percent of the Purple Porch’s goods meets a common rule of thumb: food produced within 400 miles of where it’s sold. Most of that comes from within the stricter radius the Porch prefers: less than 60 miles away.

Within a day’s drive from South Bend, you can find ripe Michigan blueberries, sharp Wisconsin cheeses and kombucha brewed in Chicago. When you’re surrounded by such agricultural bounty, Smith says, sourcing your groceries from producers nearby just makes sense — and both the Porch and the Farmers Market make it easy for shoppers to do so.

In addition to South Bend’s legacy of local food and its easy access to farm products, the leaders of the market and the co-op say the third reason why the city loves its indie groceries is the simplest of all: Their shopping experience is just better.

“We’re service-oriented,” says DeLoddere, who runs a coffee and spice stall at the Farmers Market in addition to serving on its board. Vendors at the market and sales staff at the Porch know the products they’re selling — often because they made them themselves. Shopping at these kinds of businesses means you can ask questions and get answers, right on the spot. In fact, she says, “That’s why we’re here.”

Further, the ultra-invested staff and relatively small spaces make these local shops perfectly suited to shopping in the age of coronavirus. Both stayed open throughout the social-distancing measures imposed this spring, adapting their business models to allow curbside pickup and online orders. They could shift and sanitize at a speed many large chains couldn’t — and because they lack the name recognition of a Walmart or Whole Foods, they could stay better stocked, too.

“The sales from our local producers, vendors, farms, they’ve, like, doubled,” Smith told me in April. “I think that people might feel a little safer just knowing they’re buying greens locally from a farmer versus buying a package of lettuce that was grown in California.”

For produce, she explains, fewer hands touch a product on its journey from Elkhart County farm to Purple Porch shelf than one picked on the West Coast, shipped across the country and unloaded at a chain store where a half-dozen customers might examine it before it lands in a cart. And for processed foods and meats, stores like the Porch offer even more security. The beef at your local Target may come from the kind of packing plants that were ravaged by COVID outbreaks this spring, reducing supply and endangering workers. The steaks and burgers you’ll find at the Porch come from small, local cattle farms — which don’t have those problems.

Between the safety, the convenience and the comfort of knowing that your grocery dollars are staying in the community, stores like these seem like a natural fit for a city that, like South Bend, sees itself as on the rise. And they’re getting more popular all the time. The market got a clout boost last year when Pete Buttigieg made it a regular backdrop for his hometown interviews, and at the Porch, plans were recently unveiled to make Domer Dollars an accepted form of payment.

The days when an undergraduate can flit through South Bend without knowing its treasure trove of local-grocery riches may be behind us — and, as a convert myself, I can’t help but think that’s a good thing.

I won’t pretend that, during my young-professional years in the city, I swore off chain stores altogether. A girl just needs Oreos sometimes, and what’s more, the Martin’s on South Bend Avenue couldn’t be beat on proximity to my office at Notre Dame.

But I preferred shopping at the Porch and the Farmers Market.

I like buying my produce from the farmer who grew it. I like taking my grandparents to a market and discovering that not only did they shop there decades earlier on visits to relatives in town, but the guy behind the counter at the bratwurst stand was one of those distant relatives.

Writing this from quarantine, I was as eager as anyone to get back to my old grocery-shopping routines — but the thing I missed most wasn’t the cavernous space of my nearest chain. It was the cozy stalls and friendly faces of the not-so-supermarket, local style.

Sarah Cahalan, a former associate editor of this magazine, grew up in Logansport, Indiana.