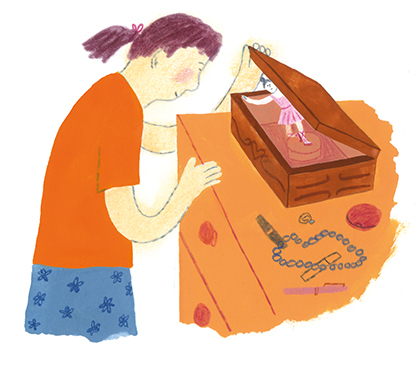 Some weeks ago a coworker at my occupational therapy clinic called in sick because her daughter had swallowed a small toy. She texted an update midmorning: a photographed X-ray of her child’s midsection revealing a T-shaped white object along the left side. I was surprised to see how far from midline the stomach is. Or maybe the piece had already migrated to the intestine.

I also was surprised by how clear the image was, the bright white object against faded gray ribs and shadowy organs. It was not a toy after all but the dial of a music box, semantics my friend likely felt minimal concern about while shuttling her daughter to the emergency room.

As a child I had a music box my Aunt Marsha gave me. Inside it lived a ballerina whose legs were conjoined atop a spring base. That ballerina lived a life of extremes: She was either twirling to the music in daylight or pinned down at 90 degrees when the box closed. I remember opening the lid slowly, trying to deduce the angle at which she began her routine.

The dial on my music box was an elongated oval, unlike the utilitarian T-shape in the X-ray. In any case, seeing the X-ray made me wonder what my coworker might have been thinking while looking at the image of her daughter’s body. Although the focal point was the foreign object, I imagined on some level a mother taking a broader view, marveling at the body’s complexities. She may have noted the surrounding landscape of her daughter’s spine, ribs and internal organs and how swimmingly everything was going otherwise.

Swimmingly is more or less how the doctors recommended the piece come out, which I think is usually the case in these scenarios. Let the body do its thing. The next day I was curious to hear the sequel. I wondered whether the staff at the child’s daycare was tasked with preventing her from flushing the toilet.

Although I was spared any swallowing emergencies, one story from my childhood has captured my imagination ever since. At some point I had heard that royals under duress to abscond would swallow their precious jewels. I attached a visual to this story: the Fabergé collection at my local art museum. Although I knew the gilded eggs would not slide down an esophagus, I pictured the smaller jewels nestled in the gastrointestinal tracts of royal family members fleeing their palace, a notion that added intrigue to the exhibit. Reading the placards, I find no evidence to corroborate my fantasy, yet the story persists like a song lyric I have misunderstood for years. Even now, I see the polished stones winking under the bright lights as if they know more than I do.

My grandmother also held an erroneous mental image as a child. Her mother had died young, so my great-great-grandmother Mary Cahill assumed some caretaking responsibilities. When my grandmother was 6 or 7 years old, Cahill told her that she came from a family of “long livers,” likely trying to console the little girl that the premature death was an aberration in a robust family line. For years my grandmother believed she had an elongated abdominal organ. Now 93, Nana emails a monthly newsletter with family photographs and a column written by my grandfather. By all appearances, her liver and whatever else expels her toxins are thriving.

Our office text thread lights up most frequently between 6:15 and 7:15 a.m. Coworkers alert the group to personal or family illnesses, often in detail: “My daughter has been up vomiting since 5” or “I have a kidney stone,” rather than a simple “I’ll be out today.” One therapist’s absence increases the others’ workload, so I understand the impulse to justify.

We all carry treasures inside us — if not jewels, then the coils and pumps that absorb necessary things and bid adieu to unnecessary things. Like the ballerina in my music box, my colleague’s daughter found herself pinned down in an X-ray machine for a long, dark moment one morning, but soon she was up twirling again. The light shone overhead. The music of life resumed. Here’s to that kidney stone following course.