It’s a Thursday evening, and Camisa Vines and her teammates have just finished presenting the video-sharing app they built. Everything had fallen into place. The app’s user-friendly interface operated smoothly, the demonstration proceeded without a hitch, and the audience raved.

Not bad for three youngsters who spent just 12 hours learning to code and building the app from scratch.

“This experience has been amazing for me, and it really confirmed that I want to major in computer science in college,” says Camisa, 15, a sophomore at Clay High School in South Bend. “It’s always been a dream of mine to code websites and to be involved in the advancement of technology. So when I heard there was a code school, I had to be a part of it.” 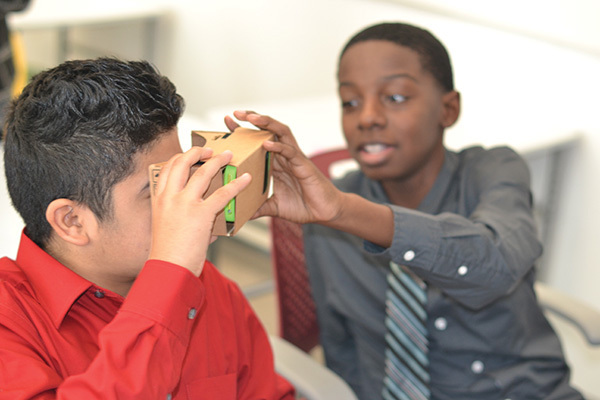 Together, the team unveiled AnyVid, an app that allows members of Boys & Girls Clubs of America to share videos with each other. The process is simple: Copy a link from YouTube, write a short description and select a club location from a dropdown menu. Chapters from all over the country can learn what their counterparts have created.

The project was one of two that the Boys & Girls Club of St. Joseph County presented at the O.C. Carmichael Jr. Youth Center in late October as the latest South Bend Code School class drew to a close. A few days later, the group traveled to Chicago to show off its apps at Google, the culmination of six weeks of work during which the half-dozen students learned three coding languages and worked with a cloud database.

The class they took was the second of its kind offered by South Bend Code School, which aims to eliminate barriers between people and technology, says founder Alex Sejdinaj. The new venture has taught both technical skills and civic-oriented problem-solving to local youth, many of whom come from underprivileged backgrounds.

“We really want to turn these kids into the kind of people who realize that code is the tool used to build your imagination and that you use code as a tool to solve problems,” Sejdinaj says. “So it’s not just, ‘Let’s bang on a keyboard,’ but ‘Let’s identify an issue that exists and attack it with technical solutions.’”

Sejdinaj, who grew up in the South Bend area and earned a music degree from Indiana University, learned to code while living in Nashville. He and a tech entrepreneur were managing a music studio there when Sejdinaj tired of the business model — haggling over payments with struggling artists. So his business partner suggested he try coding.

After two months in a coding boot camp, Sejdinaj led a team that developed an app for a city software competition. The app, which used public building permit data to predict gentrification, took third place.

“It was literally a two-month turnaround from ‘I don’t know what I’m going to do with my life’ to building an application that people wanted,” he says.

After moving back to South Bend to take a job with Notre Dame’s Business Intelligence Team, Sejdinaj initially thought he could start a code school to help adults transition to new, more lucrative careers, perhaps with some of the area’s startups. But when the University’s Robinson Community Learning Center asked him to help teach a class for underprivileged kids, he seized the opportunity, partnering with Chris Frederick, a Business Intelligence colleague at Notre Dame, and Alexandra Liggins ’15, who had taught a computer class at the Robinson Center.

A week into the first Code School, students saw biographical pages they’d built displayed online for the first time. Their initial reaction was to poke fun at each other’s pictures, until Sejdinaj explained the significance of what they’d achieved. They’d just created their first webpages — something, Sejdinaj told them, not even college computer science students could do without the training they had been receiving.

“And they all shut up,” he says. “You could hear a pin drop. And one kid just goes, ‘Really?’ And the attitude in the room completely changed.”

It was the first step in a summer that would also see students tackle CSS, a language used for design, as well as JavaScript, which helps create forms and improves user experience on websites. These technical skills would pave the way for meaningful projects.

Students in the first class identified violence prevention as a key concern. They heard from community outreach and innovation experts with the City of South Bend, learning more about how violence affects people — and how technology can help them stay safe or cope with difficult circumstances. And they set to work.

In just five weeks, the Robinson students constructed 23 websites, several of which focused specifically on addressing violence. One allowed participants to post a picture and share a story about how violence had affected them. Another identified safe after-school hangouts. A third let people tag graffiti as good (green) or bad (red) on a map to help the parks department remove gang-related messages while leaving artistic expression intact.

At the end of the summer class, students presented their apps to more than 30 people, including South Bend Mayor Pete Buttigieg. Several news crews covered the late summer presentations.

“They got to see at that point that this is serious,” Sejdinaj says. “People care about what we’re doing.”

Back at the Boys & Girls Club October presentation, Benjamin Knight, a 14-year-old eighth grader at nearby Jefferson School, and his teammates have just finished flexing their newfound coding prowess. Their app allows kids to create events and bring peers together for fun, safe activities.

“I never thought that something I made would be out there for the world to see,” Benjamin says. “It was pretty cool.”

Camille Robinson, the club’s branch manager, marvels at what participants have accomplished in so little time. “This was on a whole other level,” she says. “To have it here and see what the kids have learned in six weeks is amazing. To have them present at Google is icing on the cake. This is a skill you can have for the rest of your life and continue to develop.”

The technical skills, while powerful, are just part of a larger education young people acquire when they try their hand at civic-oriented coding, Sejdinaj says.

“We’re not just bringing code to these kids,” he says. “We’re also bringing the ideas of entrepreneurship, civic or social responsibility, public speaking, marketing and mentorship.”