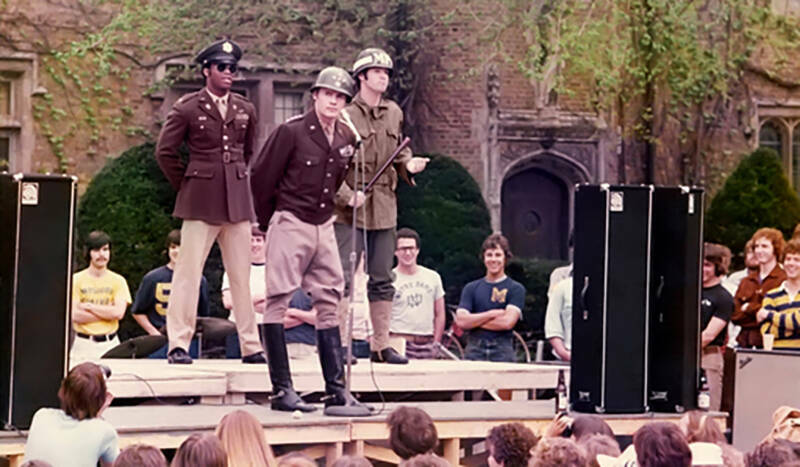 Donald Doheny ’77, ’81J.D., doing his thing as General Patton, with his retinue in tow. Photos provided by Elton Johnson ’76

The logic in the ’70s is difficult to explain to people who didn’t live through it.

This was a campus, like many others, where students opposed the Vietnam War. On May 4, 1970, after President Nixon ordered troops to expand the war into Cambodia, Notre Dame student body president Dave Krashna ’71 called for a massive boycott of classes. And, even with final exams approaching, students stayed home.

Krashna had the backing of Notre Dame’s president, Father Theodore Hesburgh. In a public letter to Nixon, Hesburgh expressed his personal dismay with the war and chided Nixon, “Most fundamentally, may we state our deep convictions that our national priorities are not military, but human.”

It would seem that these were deadly serious times. Yet, in student elections the following spring, a goofball candidate named Bob Kersten ’74, with his cat, Uncandidate, as his running mate, won 65 percent of the vote and declared himself king. His campaign focus? Notre Dame students needed regal rule because they weren’t ready for democracy.

And one of the most popular faces on campus a year later was that of World War II General George Patton, perhaps the biggest war hawk this nation has known. We can thank Donald Doheny ’77, ’81J.D., for elevating Patton’s place in campus culture.

This is how that came to be.

In February 1970, a month when 467 Americans died in the Vietnam war, 20th Century Fox released Patton, a movie that won seven Academy Awards, including Best Picture and Best Actor.

George C. Scott portrayed Patton, who led American troops through bloody battles in Africa, Italy and France on the way to victory over Nazi Germany. If Patton had had his way, American troops would have pressed further and destroyed the Soviet Army as well.

One of highlights of the movie was an impassioned speech as he prepared his Third Army for battle. Look it up on YouTube for the full effect, but here are a couple of nuggets from that rafter rumbler:

“We’re not just going to shoot the bastards. We’re going to rip out their living goddamned guts and use them to grease the treads of our tanks.”

The film had a deep but mixed effect. Some saw Patton as an antiwar movie, a sort of parody because of its over-the-top glorification of blood and gore. Others saw it as a “back the troops” effort that drove home the need for total American commitment and sacrifice.

Don Doheny, whose high school friends called him D.A., learned the Patton speech by helping his best friend, Bill Trigg, in a drama class at DeSmet Jesuit High School in the St. Louis area. Trigg performed the speech while Don had a background role as Patton’s aide, Lt. Col. Codman.

“We had a lot of fun with it,” recalls Trigg, who adds that their inquiry led them to start smoking cigars soaked in bourbon. “D.A. was my best friend, but we lost touch after high school.”

Trigg continued the Patton act after he moved to Thomas More University in Kentucky and then to Albany, New York, for graduate school and his career. He occasionally would brush off his Army costume to perform at shows or fundraisers.

Unbeknownst to him, Don had taken the Patton show on the road as well with himself in the lead role.

Don passed away in December 2020, leaving longtime friend and Dillon Hall roommate Elton Johnson ’76 to tell the Notre Dame part of the story. And this is the way Johnson remembers it.

During Doheny’s freshman year, he had acquired a duplicate of Patton’s dress uniform, complete with helmet and ribbons. Johnson says Doheny’s early performances as The General were in classrooms, where professors sought a unique way to motivate students.

As a sophomore, Doheny recruited fellow Dillon residents, including Johnson, for his “Third Army” and made occasional public appearances on campus on a golf cart equipped with a portable siren.

An architecture major, Doheny spent his junior year studying abroad, where he ruminated over ways to make an even larger impression as a senior.

Through his contacts in the Army ROTC, he developed a greater authenticity. He found World War II era military police uniforms for two Dillon friends who would serve in his personal security detachment. He also had a genuine Army Jeep and a regular Army non-commissioned officer to serve as his driver.

“Both the Jeep and driver were from a nearby Indiana Army National Guard unit,” Johnson recalls. “I don’t know how he did, but he did it. It was simply amazing, especially considering how Don never scrounged. He had a way of asking, and people would just give him things. It was an incredible people skill.”

One of Johnson’s favorite memories involves that Jeep.

“I told Don that I wanted to go for a ride because I had never been in a real U.S. Army Jeep before. On the way back to campus, we were driving down Notre Dame (Avenue) and we passed a group of high school Junior ROTC cadets.

“They heard the siren and they saw the four-star insignia on the front of the Jeep, so they started lining up at attention on the sidewalk and rendering a hand salute because they thought it was a real four-star U.S. Army general coming down the street.”

What did Doheny do?

“He stood up in the Jeep and returned their salute. It was classic. I bet many of those students actually thought that they had seen a real four-star U.S. Army general that day.”

The Patton act was a crowd pleaser on several levels. First of all, it was relentlessly profane — and therefore funny. These were the somewhat-prudish days, as comedian George Carlin pointed out, when there really were seven words you could never say on television.

General Patton used several of them in his speech. He was a master of using crude language in large volumes and in inventive ways. For Notre Dame men, the thrill of hearing Doheny repeat those naughty words was unsurpassable. It was hilarious.

Yet, in a completely different way, the speech was an amazing motivator, rivaling the famed pep talks students saw in Knute Rockne, All-American. It struck a patriotic chord even with would-be hippies styling in their bell bottoms and peace beads.

And third, Doheny had mastered the speech and mannerisms we had seen in George C. Scott’s brilliant acting. As far as we knew, this was Patton on stage, threatening and insulting us.

Doheny also had the good sense not to overdo his act. Even though he and Johnson decorated their dorm room to resemble an Army HQ office, Don’s public appearances seemed random, at an occasional pep rally or An Tostal talent show. Like King Kersten in his regal robes, The General made each campus sighting a memorable one.

He also maintained a sense of mystery, outside of Dillon Hall. Few would recognize the Doheny name. He was known on quads north and south simply as “The General.”

After his class graduated in 1976, Doheny had a fifth year on campus to complete his degree in architecture. Then he stayed four more years, earning his law degree in 1981.

Not surprisingly, he was drawn to the military for his career. He attended the U.S. Army Judge Advocate General School and served with the U.S. Army Legal Services. Later, in civilian life, he practiced law in real estate, construction, architecture and engineering.

He was forced to leave the profession after he suffered a serious head injury in a car accident in 1993. He had lived much of his post-Notre Dame life in Washington, D.C., but then moved in with his mother in St. Louis. He struggled after she died and moved around a bit. He was back in St. Louis when he died on December 9, 2020.

As famed as he was on campus in his time, the General’s passing occurred without much notice. Bill Trigg didn’t hear about it until he saw Doheny’s name on the deceased list for his 50-year reunion at DeSmet.

And for Johnson, the thought of Doheny’s death still hurts. Like Doheny, Johnson entered military service after Notre Dame. He retired as a lieutenant colonel, having served two tours of duty in Iraq and one in Afghanistan. His military awards included the Bronze Star Medal and the Meritorious Service Medal.

“We had just recently connected, thanks to social media, and had a great time reminiscing about the good old days,” he says. “I promised Don that I would visit him next year. Don was excited about it because as he put it, ‘We’ll be getting Third Army back together again!’”

Doheny’s army moves on without its leader, but with words that will not be easily forgotten.

Ken Bradford is a freelance writer, and a former reporter and editor at the South Bend Tribune.