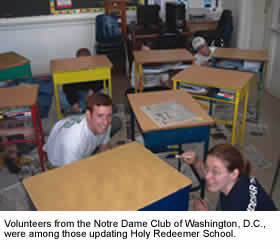 You might say Rev. Edward Sorin, CSC, initiated the first service project at Notre Dame when he dispatched the University’s priests to serve as chaplains—and Holy Cross sisters to serve as nurses—for the Union Army in the Civil War. There was a group in need, and the Notre Dame community addressed it.

Yes, even back then, there was more to Notre Dame than academics and spirituality. While those are the cornerstones of the University, Notre Dame’s dedication to service is the cement that holds it all together. In fact, service is not just part of the University’s mission, it is its mission. As its mission statement reads: “The University seeks to cultivate in its students not only an appreciation for the great achievements of human beings, but also a disciplined sensibility to the poverty, injustice, and oppression that burden the lives of so many. The aim is to create a sense of human solidarity and concern for the common good that will bear fruit as learning becomes service to justice.”

So it comes to no surprise that, when the call went out asking the Notre Dame family to participate in service projects as part of the “Father Ted Month of Service,” hundreds responded. The initiative, put in place to celebrate the 90th birthday of President Emeritus Father Theodore Hesburgh, CSC, in May 2007, inspired Notre Dame alumni and friends all across the country to give, donate, build, as well as teach, feed and support tens of thousands of people all in his honor.

In just one month, more than 100,000 items such as food, books, coats and toiletries were collected and donated to the needy; 114 ND clubs and alumni groups spent 15,000 hours participating in more than 135 projects; 25 projects fed a meal to more than 4,000 people in need; more than 40 homes, churches, community centers, schools, roads, beaches and parks were repaired, painted, landscaped or cleaned up; tens of thousands of dollars were raised through fund-raising drives; and hundreds of care packages were sent to U.S. troops abroad.

For most members of the Notre Dame family, giving back is a year-round initiative. For Notre Dame clubs, community service is one of their top priorities.

Nowhere is that more evident than the Notre Dame Club of Staten Island. When you consider the size of the New York club—150 members, two-thirds of whom are not alumni—the impact its signature service project makes on surrounding communities is astounding.

The project is called the Bread of Life Food Drive. Since its inception in 1992, which honored the 150th anniversary of the University, the drive has collected some 800,000 food items—items that have helped to support countless nonprofit groups in the Staten Island area.

“We hold the food drive each spring when the cupboards at the nonprofits are usually running low,” says Joe Delaney, director of the Bread of Life Food Drive.

In the drive’s first year, the club sought the help of eight public schools to collect food. More than 7,000 food items were distributed to six nonprofit organizations that serve people in need in Staten Island.

Last year, the food drive collected 62,000 items of food from 92 schools and distributed them to 26 nonprofit organizations.

“Though it was the Notre Dame club that started the event, the entire community has adopted it as its own,” Delaney says. “The Bread of Life Food Drive has helped us cultivate a culture of giving.”

The entire process takes about two weeks. In early March, club members visit schools to distribute all the materials necessary to generate awareness: posters, boxes to hold the food and scripts for principals to read with specific messaging about the Bread of Life Food Drive.

The following week, club members return to the schools to collect the food items. One full Saturday morning is spent sorting, then club members and volunteers deliver the food to area nonprofit organizations.

“One of the best parts of this project—aside from the food we’re able to donate—is the lesson it teaches kids in this community,” Delaney says. “As the years go by, we’re getting high school- and college-age volunteers who remember participating in the project when they were in elementary school. We’re able to instill the importance of giving back to kids at a young age, and that’s a value they will carry with them through life.”

This year the ND Club of Staten Island will hold its 18th annual Bread of Life Food Drive in late March and early April. For more information or to donate to the initiative, contact Delaney at josdelaney@deloitte.com

Notre Dame alumni all across the country commit themselves to community service projects daily. The following is a small sampling of the ongoing projects:

The Notre Dame Club of Chicago

Each month, members of the club donate, prepare and serve dinner to guests of the Lincoln Park Community Shelter. Volunteers also donate and prepare sack lunches for the residents to eat the following day.

The club helps distribute food from the Greater Chicago Food Depository to the residents of the community. The food includes items that are often difficult to get in food pantries, such as produce.

Once a year, the club participates in Rebuilding Together (formerly known as Christmas in April); the Catholic Charities Toy Shower, in which it helps sort the thousands of toys donated every Christmas for needy children; and the Children’s Place Summer Carnival, which provides services for children affected by HIV/AIDS and other serious illnesses.

In 2004, the Mid-Hudson Valley club began the Adopt-a-Soldier Program. It supports an average of two soldiers a year, sending them packages every four to five weeks that include such food items as powdered drinks, cookies, crackers, peanut butter, jelly, pudding snacks and granola. The care packages also include such toiletries as foot powder, soap, razors, deodorant, baby wipes, shampoo, bug spray and toothpaste. A Notre Dame T-shirt is included in each package.

Last summer, more than 40 ND alumni volunteers from all across the country came together to build a house as part of the annual Hammerin’ Irish Building Blitz for Habitat for Humanity in South Bend. Sponsored by the ND Alumni Association in conjunction with the Saint Joseph County chapter of Habitat for Humanity, this marked the project’s 10th year in existence.

Last summer, nearly 20 volunteers from the club teamed up with ACE teachers and members of the Holy Redeemer parish to paint stairways, desks and hallways, landscape the school’s grounds and organize its library.

Statistics at a glance:

• More than 17,000 ND alumni participate in service with their alumni clubs each year

Angela Sienko is the alumni editor of this magazine.