The first moment I realized Junior Parents Weekend was a big deal came Saturday morning. As folks were gathering for the College of Engineering Open House, my son Benedict introduced me to his buddies and their parents. There were a lot of handshakes and smiles. “Sorry, what’s your first name again?” I asked repeatedly. The din in McKenna Hall made it difficult to catch details on the first go around.

Yet the noise wasn’t a problem. In fact, it matched the buoyant mood; it complemented the palpable joy. Everybody was sipping coffee and tea, but the caffeine was superfluous: A natural buzz spread through the crowd as sons and daughters connected moms and dads with their Notre Dame world. “I remember hearing about Junior Parents Weekend during freshman orientation,” said one mom, “and I immediately marked it on my calendar.”

That wasn’t the case for us. I don’t think JPW even crossed our radar until we received an email from Ben in late October. “Did you guys get this?” he wrote, forwarding the information about procuring JPW tickets. “I don’t think there’s an immediate rush.” He was in Dublin for the fall semester, and our communications with him were typically erratic and brief, so the fact he mentioned it at all gave us a clue: This was important. 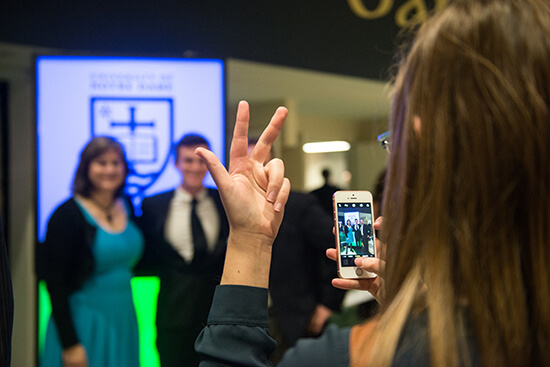 “We got a letter in the mail,” I wrote back, “and we want to do as much of it as you’re willing.”

I guess we assumed the JPW events were more or less optional — something extra for parents who live far away. Since we live in South Bend, we’re familiar with campus and get to see our Domer children intermittently. Plus, since we’re close by, we try to avoid any appearance of hovering.

We were obviously mistaken about Junior Parents Weekend. It really is a big deal.

Then Father asked the students to call to mind how much those whose hands they held had contributed to where they are today. It was a moment of profound peace — a stillness pervaded that cavernous space as hands squeezed and tears expressed silent gratitude.

The Open House was the first event I could get to, and I appreciated the warm welcome from Dean Peter Kilpatrick of the College of Engineering. Ben and I then walked over to DeBartolo Hall for a presentation on his major, computer science. You’d think a PowerPoint on computers would be dull, but you’d be wrong. The presenter was the department chair, Dr. Kevin Bowyer, who wore a bright blue Hawaiian shirt, in keeping with the surprisingly clement February weather, and his tone was equally bright.

Bowyer made it clear that the rigors of the major would equip Ben and his classmates to be successful in their careers and make a positive impact in the world. Most of what he and his colleagues said flew well over my head, but I was happy that Ben knew what he was talking about. “Very impressive,” I whispered to him at one point. He just shrugged and smiled.

Next stop was LaFortune Student Center to catch Ben’s weekly music show, “Tasteful Airhorn with Travis and Scott,” on Notre Dame’s online streaming radio station, WVFI. He’s been hosting the program on Saturday afternoons since his freshman year, along with various co-hosts — currently, his good friend, Kevin, another ND junior. It was a delight to see them bantering about the music, welcoming visitors to choose tracks and even introduce them, a magical glimpse into Ben’s Notre Dame life in all its abundant dimensions.

Around 2 p.m., my wife, Nancy, caught up with us at Alumni Hall to hobnob with Ben’s dorm brotherhood and greet the legendary Father George Rozum, CSC, Alumni’s longtime rector. We found a spot with Ben’s friends and their parents on benches in a courtyard, then sat back with the other moms and dads to marvel at our sons and the close-knit community of mutually supportive men they’ve become.

Nancy and I darted home at that point to change for the evening’s more formal activities and make sure our younger children were settled in. Of course, everything takes longer than you expect, so we got back to the Joyce Center for the Mass with only minutes to spare. I dropped Nancy off to meet up with Benedict and went to park.

“Ben texted that he has seats on the main floor of the arena,” she told me.

By the time I arrived, Mass was about to begin and I didn’t have time to locate them. So I found a vantage point at the top of Purcell Pavilion where I could scan the crowd below. The orchestra and bell choir filled the space with sweet sound, and the voices were ethereal. “Joyful, joyful, we adore you,” we all sang together during the processional. “God of glory, Lord of love.” It captured the spirit of the congregated juniors and their families, and it accentuated for me my growing realization of what JPW represents.

I spotted my wife and son on the Pavilion floor, just as Father Matthew Kuczora, CSC, was starting his homily. I decided to stay put and join my family when everyone stood to recite the Creed, so I was perfectly situated to witness what happened next. Kuczora directed the men and women of the Class of 2018 to grasp the hands of their parents, guardians and other loved ones. From high above, I could see sons and daughters reaching out, inclining their heads, grinning, and parents responding in kind. Then Father asked the students to call to mind how much those whose hands they held had contributed to where they are today.

It was a moment of profound peace — a stillness pervaded that cavernous space as hands squeezed and tears expressed silent gratitude. “Notre Dame, our Mother,” we all sang as the Mass ended, arms locked, swaying, “tender, strong and true.”

After Mass we followed the throng to the fieldhouse for the President’s Dinner. We found our seats at a table with two of Ben’s best friends and their parents. Our conversation was lively, the laughter infectious and the camaraderie readily apparent. Stories rocketed around the table, many of which Nancy and I hadn’t heard before. As Father John Jenkins, CSC, said in his address, the beauty of the JPW tradition is how it reverses the order of hospitality between parent and child. Formerly, it was mom and dad welcoming their children from their Notre Dame life; now, it was sons and daughters doing the welcoming. We parents were the guests being initiated into the rich lives our children had embraced and were living every day. 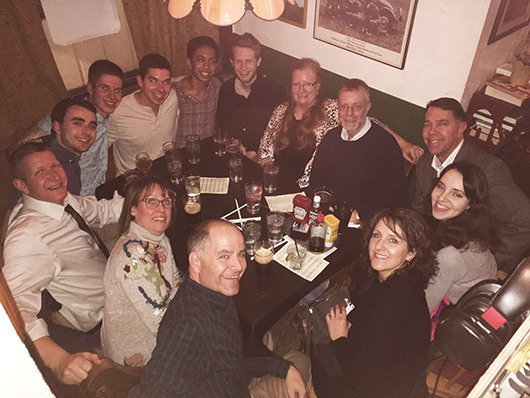 Later that night we met up with even more of Ben’s friends and their families at Fiddler’s Hearth in downtown South Bend. It was the perfect venue for more introductions, more stories, more weaving together of our disparate family histories into one big Irish clan.

Ben sister, Joan, will be a junior next year, but she’ll be away at Oxford and so will miss her JPW. I’ve heard in such cases that students are encouraged to attend as seniors, and we’ll certainly be willing to do that if Joan chooses. But I think Nancy and I will still come back next year, even without Joan. In a sense, we’ll be able to represent her among her graduating class, and we’ll get to know more of her inner circle and their families. Besides, as we’ve learned, they’re our family now, too, and we don’t want to miss out on the party.