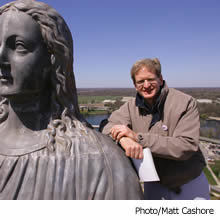 Sometime toward the end of my first week on the job here at the magazine, more than 10 years ago, I received a phone call from Father Malloy’s office.

His administrative assistant said the president wanted to meet with me. A few days later I was seated in a large upholstered chair in the tall president’s office, on the third floor of the Main Building. In those days, the magazine’s scruffy offices were one floor above (we’re now in Grace Hall).

I had no idea why the president wanted to see me, but Monk, as I’d been told everyone called him, even to his face, wasted little time explaining. He said he liked to meet every new administrator who came to work in the Main Building. He asked me about my background, and we chatted for maybe 30 minutes before I walked back upstairs to my office.

I couldn’t find the nerve to correct him. I was no administrator. I didn’t supervise anyone. I was low man on the staff box of the University magazine, the junior-most editor by seven years. And not even an alum. Not even a Catholic.

As I came to realize, though, the meeting was no mistake. Whether an associate editor can rightly be termed an administrator, people in authority here cared about making the new one feel at home. By the time I got that call from Monk’s assistant, every other officer of the University had already sent me a personal note of welcome.

Such was my introduction to the Notre Dame Family, a concept I wouldn’t fully appreciate (or begin capitalizing) for some time.

It seems natural to think back on my first week at Notre Dame now, in my last. I’m going to violate a cardinal rule of journalism and ramble on about something you, the readers, already know: This is a one-of-a-kind place, and nowhere are there so many good and smart and talented people. I consider it a blessing and a privilege to have worked here, to have been here.

A rare privilege, actually, because openings on the _Notre Dame Magazine staff occur almost as infrequently as Navy victories over the Irish in football. Anyone with half a brain realizes this a great gig, so nobody leaves. This will undoubtedly prompt assumptions about the size of my brain.

I couldn’t begin to list the special opportunities my position on the magazine afforded me, from seeing the overwhelming poverty in the slums in Nairobi firsthand to writing about the meaning of life. I sometimes found it hard to believe I was being paid to read and proofread the essays that appear in this magazine, including the work of my friend and boss, Kerry Temple, the most poetic writer I’ve ever had the pleasure to know.

At the press conference where he announced he was stepping down, Lou Holtz was asked what he thought his impact had been on the University. He answered, “You don’t change Notre Dame. Notre Dame changes you.” I feel the same way.

I’m going to miss so many people. Many became friends, many inspired me. In the summer of 2003, I attended a Mass of Healing for Denny Moore, the University’s longtime spokesperson, who was being treated for cancer. Monk was the celebrant. At the end of the service Denny spoke to the packed crowd of friends in the Keenan-Stanford Chapel. With absolute calm, he talked about having been blessed in many ways and about his belief in the power of prayer. It remains the most courageous thing I’ve ever seen. He died later that year.

A more lighthearted memory concerns my running on campus. Over the years I jogged hundreds, maybe thousands of miles around the lakes and other places at Notre Dame and across the road at Saint Mary’s. One rainy fall day several years ago I was jogging inside the Loftus Center. The marching band was on the artificial turf getting ready for the game that weekend. As I turned the corner, the band struck up the Victory March.

It was incredibly loud in the enclosed space. I involuntarily began high-striding and racing down the straightaway like it was the Olympics. If I’d been wearing a helmet and pads, I think I could have run through a concrete wall.

I don’t know if everyone I tell that story to can imagine what I was feeling, but I think Family members can relate.

_Ed Cohen stepped down as associate editor of this magazine in January 2006 to become director of publications and communications at the University of Nevada in Reno.