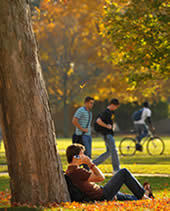 Every generation has a story, uniquely theirs. Amid the countless individual voices shared sentiments emerge. This is the “stuff” of anthropology. Several years ago I walked into my First Year Seminar and encountered a group of students profoundly different from any I have seen in my decades of teaching. I told the class I’d teach them how to do professional research if they did it on themselves: who, essentially, are they as a generation?

Three months later they handed me a collaborative piece (quoted in italics throughout this essay) that began: We, in essence, are a new breed. Discovering what truly lies at our core and what truly drives us through that which we endure. And we are far, far from any complete realization. But we are starting to see. We got something. And we are something. Something that will move and shake and change this world beyond what we can at this point imagine. Beyond our wildest conjectures.

Several classes and hundreds of these ethnographies later, the story unfolds. It was told by the students themselves — from a senior anthropology class and that freshman seminar — in a collection of “chapters” explaining Notre Dame and their generation, excerpted on the pages that follow.

Perhaps the distinctive character of this new generation of students rests in growing up in an era of globalization — of, as students say, “having a net-boyfriend from Romania and gaming with people from China to Chile by the time you’re 12” or “of creating a new human emotion that lets you get through the constant crisis and chaos screaming from the news.” Our generation succeeds spectacularly. We fail epically. Maybe it’s forging a new and fragile sense of hope and justice in the midst of war and economic meltdown. We are global, innovative, and exposed.

This generation represents, to me, a quiet revolution. It is not born in loud, cultural explosions like the birth of rock ’n’ roll, civil rights protests or the creation of rap. But it is no less forceful. And because it is quiet, students say, their generation is often misunderstood. All too often negatively, they feel.

Genius, lazy, rebellious, groundbreaking, doomed. These are some of the words used to describe our generation.

Perhaps the word that most chafes is “apathetic.” Students can’t understand why we — teachers, parents, coaches, media pundits — don’t see the contributions they are making. As student after student, class after class wrote: “Our generation, while generally viewed as apathetic, is actually driven by passion. We care.” In a world of fragments — broken families, jobs, countries, ideals — this generation is forging connections. No matter what we go through, someone will be there to catch us when we fall, because we care.

They care, for example, because they feel they have developed a quiet toughness to deal with whatever the world throws at them. Excessive competition. Aggression. Faltering social systems. This is the first generation born into nonstop reporting on the moral bankruptcy of our governing institutions: leaders putting laws and ethics into place while breaking them. People over 25 often see such violations as aberrations. Fed on a lifetime of scandalous stories, many in this emerging generation see these not as exceptions but as the rule. One that needs to be changed.

Rather than take to the streets as previous generations have, I see these students quietly, conscientiously turning their attention to the environment, poverty, political participation, social justice, energy, humanitarian work. Instead of thinking outside the box, we are going to create the box. They want to be taken seriously for their contributions:

Perhaps the defining characteristic of this generation is that, for them, contradictions are inescapable: “We hook-up, we are virgins at marriage; we ‘are’ technology looking for connection; we drink excessively to make a space where we create our own rules in a world of other’s rules; in the midst of stark differences we are less influenced by racial, social, national and cultural boundaries.” Imagine us as a group of individuals who are absorbed in self-doubt but dripping with confidence.

They have generally given up on trying to avoid inescapable contradictions — something that they see as having in part led us into the current moral and economic crises we face — but embrace them instead, seeking reconciliation and understanding. We are brimming with confidence in our own uniqueness, ready to proclaim the new global gospel, here to change the world. We don’t just care. We Are.

Students today believe that the majority of what they need to learn to survive in the world will be learned outside of the classroom. In perhaps one of the more touching discussions, my students explained that “when we get together with our friends in our pajamas to watch a video and eat popcorn, we are not just slacking off. We are creating a family that will move with us throughout our lives. We are not blind, we know that one of every two marriages fails, that the notion of job security is a quaint nostalgia, that family members get sick, are raped, go to war. But we can continue to believe in meaningful relationships, knowing this family of ours will be there through thick and thin.”

This camaraderie was evident in the way my classes produced their work together. Used to the rancorous in-fighting and polarization of “adults” from politics to professional meetings, I was amazed at their mutual respect, support and collaboration across differences when writing their ethnography. I have grown used to the fact that when a student falters, the others back him or her up; when one shines, the rest are full of praise. Though they would like to bring some of the 21st century to Notre Dame, they trust this university. For most, it is a trust of both the mind and the heart.

We are Significant, but Undefined. We got what it takes.

Carolyn Nordstrom is a professor of anthropology and a fellow of the Kroc Institute for International Studies at Notre Dame.