It's been said that Notre Dame's school colors are "blue and gold and sometimes green," and now that erstwhile third color applies even to our roofs. 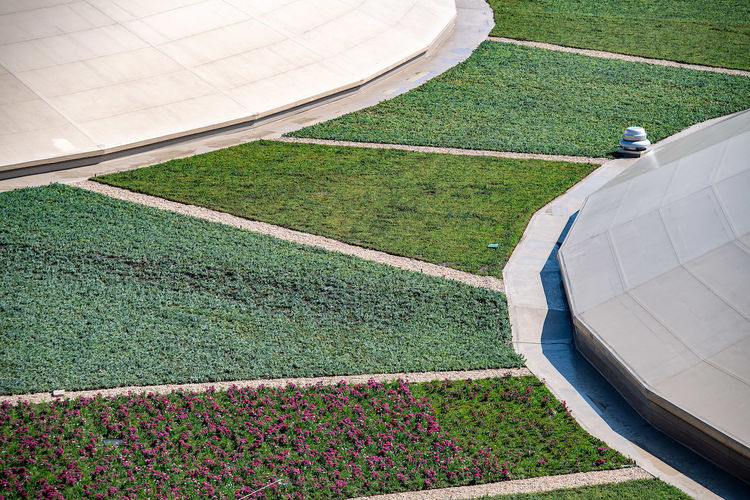 When the Campus Crossroads buildings opened earlier this year, they came equipped with 43,000 square feet of "green roofs" — building-speak for rooftop garden plots that assist with energy reduction, cost savings and rainwater management. Continuing the sprouting trend, the University recently unveiled the largest green roof in Indiana on the roof of the Joyce Athletic and Convocation Center.

At Notre Dame, the installation of green roofs is part of the University-wide Comprehensive Sustainability Strategy. Announced in 2015, the plan is a response to Laudato si’, Pope Francis’ charge to Catholics for “swift and unified global action” to combat consumerism and irresponsible land development with green initiatives and better stewardship. Along with green roofs, coal reduction is another facet of the strategy: University officials recently announced that Notre Dame will cease burning coal well ahead of its 2020 goal.

A recent trip to the JACC's new rooftop revealed a wide array of flora — 25 of species of intentionally chosen plants that work best on green roofs — separated by gravel pathways. It’s visible from both the upper floors of neighboring Corbett Family Hall and the flight path overhead, and it was designed to echo the crisscross pathways of campus’ quads. According to a University press release, the roof measures in at 79,096 square feet, breaking the previous statewide record held by the Campus Crossroads project.

The project, begun in April and finished in August, required nearly 25,000 man hours, 40 truckloads of materials and 40,000 trays of plants. The plants were grown by LiveRoof in Spring Lake, Mich. The trays, which look similar to your garden-variety (pun intended) trays from the greenhouse, interlock across the roof and all but disappear once together. If needed, maintenance crews can pluck out a tray and replace it with a fresh one, Seiss said.

This is the 25th green roof project for Midland Engineering, and the second in Indiana, Seiss says.

“When we started to see the trend for green roofs, we dedicated staff to learning about them and hired people specifically for their expertise on green roofs,” he explains.

The project began by laying down a fresh rubber membrane roof, then insulation, before placing the trays. All of this leads to a heavier roof, yes, but also an insulating one. According to the American Society of Landscape Architects, a test roof in Washington, D.C., reduced energy usage over winter months by 10 percent, reduced the summertime roof temperature by nearly 60 degrees compared to neighboring roofs, and kept nearly 27,500 gallons of stormwater out of the city’s sewer system. Seiss says that the University expects similar “green” results from this roof, including reducing storm runoff, increasing building insulation, and increasing the lifespan of the roof up to 300 percent.

Within the trays themselves is some variation, he adds. They were designed by structural engineers and vary in height to help keep the plants alive while keeping down weight on the roof. The company also installed an irrigation system to help the plants if there’s any sign of drought. 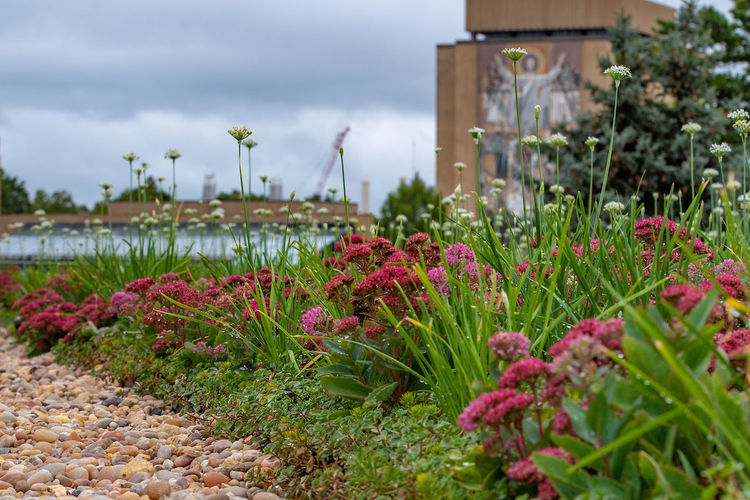 Maintenance doesn’t require a lawn mower, but it does involve a harness; those inspecting the roof clip onto a safety line around the edge, Seiss says. Maintenance includes not only plant caretaking, but also weeding. Saplings in particular can be very destructive to green roof systems, he said. Currently Midland employees come out for maintenance, and it will be that way for the foreseeable future.

The company will return to campus in October to finish up the corners of the roof, which were not in the original plan but added after the success of the main part of the project. Once winter hits, the roof will go dormant — not unlike your front lawn, Seiss jokes — and will reawaken in spring.

Amanda Gray currently works at Notre Dame Law School as the digital editor and is pursuing her Masters of Library Science through Indiana University. She previously wrote for The South Bend Tribune, among several other publications. Find her on Twitter at @TheAmandaGray.