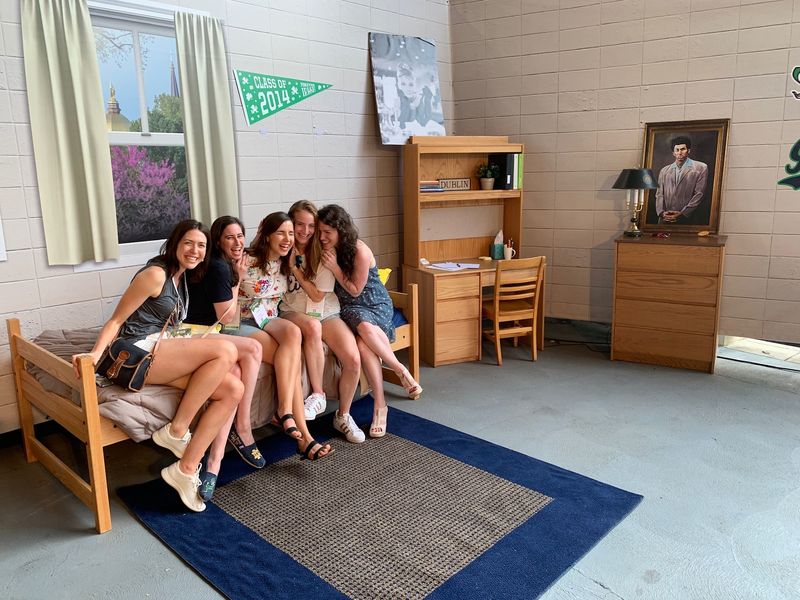 The author, right, posing with classmates at reunion

This past weekend, I returned to campus for my five-year reunion. The last time I had set foot on campus was a cool five weeks before.

“I’m not really a ‘Notre Dame Person,’” I told a friend in New York leading up to the event.

Her face glazed over in a skeptical stare. In the five years since I graduated, I’ve spent the majority of my time back on Notre Dame’s campus, first earning a graduate degree in theology and then shuttling back and forth between New York and South Bend as a proud employee of the very department that was organizing the reunion extravaganza: the Notre Dame Alumni Association.

“I think you’re a Notre Dame person,” my friend responded, digging into the brie.

I’ve been back to campus for football weekends — accompanying my parents to their first, the Texas-Notre Dame opener in 2015. I’ve been back as an assistant rector, in atonement for my sin of moving off campus senior year. I’ve been back as a graduate student, gaining access to exclusive library lounges and scoffing at the end-of-the-semester fervor of undergraduates swarming Hesburgh. I’ve been back for weddings, for work — I barely feel like I’ve left. How special could reunion be?

As the weekend approached, I joked with friends that it felt like freshman year all over again: scoping out the guest list, texting about what to wear and what to pack, coordinating plans with various groups. As I stared at the list of names, most of which I recognized (and many of which I hadn’t thought about in five years), I was surprised by the feeling that seeing all those names listed together elicited.

One of my favorite love poems by Jane Hirshfield begins:

There are names for what binds us:

In a college class, these forces run the gamut from weak to strong. There are the people you stayed up late with sorting through life’s tangled mysteries over a pint of Ben & Jerry’s in LaFun or summer shandys on the Backer patio (don’t knock it ‘til you’ve tried it). There are the faces you can attach a name to and may have said “hi” to on the quad, but with whom you’ve never had sustained conversation. Between them are a host of others: study abroad acquaintances, teammates, students with whom you’ve shared a major or a club, a choir, or a dorm. The guy you did a play with freshman year. The girl from your RecSports volleyball team.

Diving back into reunion felt like submerging myself into these forces of community. After stashing my bag in my Alumni Association office, I officially began my weekend by trekking over to the stadium concourse to meet up with friends. Instantly, I found myself in conversation with an entirely different group than I expected. I recognized this college feeling: an embarrassment of riches of good people, and the urgent frenzy of trying to talk to all of them at once. 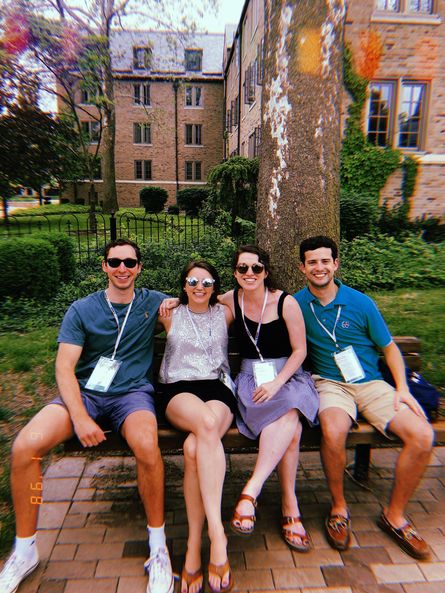 Class of 2014 grads Will Rigali, Emily Nash, Roden and Nicholas Schilling '17J.D. at their fifth reunion

At our class dinner the next night, I peeled off with a friend to sit with a group from Walsh Hall — a dorm I didn’t live in as an undergrad, but whose Wild Women I knew by reputation as a bunch who aren’t shy with their opinions. We dove right into a discussion about women in business, loudly voicing dissent, swapping stories, and sharing experiences.

As dessert was winding down, I popped over to another table to catch up with a friend from Notre Dame Vision. In a few moments, our table was talking about vows of poverty, priests living in community, and what it meant to be a Catholic who gives back to their church.

The table over, friends of mine who barely knew each other were in the midst of a deep-dive on presidential politics.

On the dance floor afterwards, sangria sloshing over our plastic punch glasses as we fist-pumped to Pitbull, it struck me how truly unique this particular community was in my life.

There’s a lot of Notre Dame culture that never quite fit me. I didn’t go to a Catholic high school or come from a legacy family; in my six years as a student, I never even set foot in Club Feve. I once told a friend I’d arrive at a football game during the “second inning,” and the only football player I could name in undergrad (and for several years after) was Manti Te'o. I majored in theater and theology — the academic polar opposites of the economics and finance programs that so often dominate each graduating class.

But I felt surprisingly at home in this beehive of South Dining Hall tables abuzz with earnest conversation about life’s big questions. It’s easy to forget in the rosy-optimism speak of mission-oriented Catholic schools that, actually, many of us are united in a common mission. As I spoke and danced and laughed with the classmates around me, I realized the thread between all of us is a sense that the world can be — has to be — a better place. People here care about making it so. We had for the past five years.

As I chatted with old dormmates, classmates and friends, I felt in a lot of ways like I was at a wedding. No one was getting married, of course (although there was an engagement — congrats, Carrie!), but a wedding, like a reunion, is where communities come together to celebrate the old and new ties that have and will hold them together. Jane Hirshfield’s poem ends with the following stanza:

And when two people have loved each other

scar between their bodies,

how the black cord makes of them a single fabric

that nothing can tear or mend.

Notre Dame was not just the fun friendships and easy acquaintances. There are the messier relationships: the SYR dates that didn’t go so well, the friend you had a falling out with, the seminar classmate always ready with an argument, the roommate of your ex. They’re all there, too, spilling their sangria (on your shoes — typical) like everyone else. At reunion, I found that my community was still made up of the people you conscientiously separate from on the dance floor, who you keep behind a strong buffer of mutual friends, with whom you gingerly avoid eye contact.

Hirshfield’s poem claims that communities that are grounded in love —for one another, for a common mission, for their neighbor — can not only persist throughout life’s ups and downs, can not only encompass the messiness of living together and bumping and bruising each other along the way, but grow stronger, making a single fabric that nothing can tear or mend.

I was surprised that Notre Dame, which has come to mean many different things to me over the past five years, still had something old to re-teach me. The Class of 2014 is its own community — one we may not have even realized we were making at the time. This community forged during my four undergraduate years is something beautiful and real that, on rare occasions, we can come back to and enter into once again. It is part of the past that has made us who we are today, an irreplaceable cord in the fabric of our lives.

So, yeah, I guess I’m a Notre Dame person.

Renée Darline Roden holds a bachelor’s and master’s degree from the University of Notre Dame and currently works as an editor for FaithND and as a playwright in New York City. Her writing has appeared in America, Commonweal, and at Dixon Place and the Bushwick Starr.