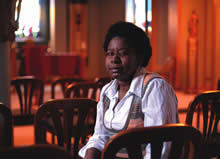 In 2005, the only home Calleen had ever known was destroyed by Hurricane Katrina. “The University waived tuition and fees for students affected by Katrina,” she says. “My mama lost her job after Katrina struck and had to move first to Texas then to Baton Rouge.”

The New Orleans native recalls with vivid clarity the moment two years ago when she found out that, having survived the lethal storm and its aftermath, her mother, Mary, had died of a heart attack.

“I had talked to her that Wednesday — the week after I got back from Christmas break — because I thought I had pink eye. She told me what to do if it didn’t clear up in a couple of days. You know, ‘mom’ instructions,” Calleen says.

“I tried calling her on Friday afternoon to tell her about my Irish tap class and that I went to get tap shoes for it. But she didn’t answer the phone. I called her cell and still no answer. I called again later that night and again on Saturday morning, but no answer.”

On Saturday, Calleen contacted her sister, Collette, who attends Xavier University in New Orleans. That Sunday, Collette went to their mother’s apartment in Baton Rouge and found her on the floor.

“Collette called me immediately and told me my mama had died of a heart attack. The emergency personnel said she had died on Friday. I did not find out until Sunday, about noon.”

Support from Calleen’s friends in Pangborn Hall was immediate.

“I remember just crying ‘No! No!’ when I found out, and someone ran to get my best friend, who was downstairs,” she recalls.

“People were calling in others for support, and my rector came in from Chicago. That night, my friends held a prayer service. About 50 or 60 people showed up at the Grotto to pray for me. It was kind of surreal. I knew them all, and they all cared about me.”

Calleen’s father had died several years earlier, and though she has some extended family in New Orleans, her mother’s death left her orphaned at a pivotal time in her life.

Just as her friends in Pangborn responded with swift support in time of need, Notre Dame was able to eliminate some of the financial burden Calleen faced.

Notre Dame will pay travel expenses for a student to get home when a parent dies and allows two friends to accompany the student. Calleen and friends Saderia Hooks and Dorea Jackson, as well as Pangborn rector Kuukua Yomekpe, left that week for the funeral in New Orleans.

“Dorea sang and Saderia read scripture,” she says. They stayed with their friend through the weekend, and Calleen remained in Louisiana a few extra days.

“But it was so unnatural. I wasn’t in my own house, my mama was gone, nothing was right. I wanted to come back to something familiar, somewhere that felt more like home. I knew I needed to go back to school, where it could be normal.”

The passage of time since her mother died has offered Calleen a perspective many people wait decades to discover.

“I have always been supported here. If I had been somewhere else when all of this had happened, I don’t think I’d have that. People get to know you so well here. They really pay attention. Any time I’ve really needed somebody, somebody was there.”

After graduating with a degree in sociology, Calleen plans on completing a year of service before pursuing a master’s degree in social work.

The family home in New Orleans is repaired now. Collette lives there with the family dog — a miniature dachshund named Daphne.

“The mortgage was paid off by the insurance company, and [the house] has been placed into the names of my sister and me. We plan to keep the house in the family,” Calleen says.

Susan Guibert is an assistant director in the Notre Dame office of News and Information. She can be reached at sguibert@nd.edu.