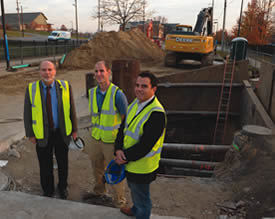 Family and friends of Tim Ruggaber ’03, ’06M.S. good-naturedly call him a “poop engineer.” When the Ruggabers’ house-hunting led them this year to an older home on South Bend’s LaSalle Avenue, his first thought was to review city sewer maps and the history of basement backups on the block.

The house survived his scrutiny as a civil engineer and sewer expert who is unabashedly enthusiastic about the way water flows, so he and his wife bought it. But Ruggaber thinks his neighbors from one side of South Bend to the other should share his mounting confidence in the city’s sewer system.

That’s because the city has just finished installing a money-saving flow management technology that his company, EmNet LLC, developed out of a research partnership spearheaded by Notre Dame and the city’s public works department. Ruggaber is the director of operations at EmNet, a local startup whose name evokes the embedded network of dynamic water-pressure sensors that have made South Bend’s wastewater and storm drainage, in the words of city public works director Gary Gilot, “the most instrumented sewer system anywhere in the world.”

For residents, that means a future with fewer revolting cellar fiascoes, a cleaner Saint Joseph River, more than $100 million in savings on anticipated sewer expansion costs and a smaller risk of expensive fines from the U.S. Environmental Protection Agency.

South Bend, like other cities with Victorian-era public works systems, has a bad track record when it comes to keeping sewage backflows out of people’s homes. The city is one of 772 in the United States — more than 100 in Indiana alone — where tempests and toilets drain together (or not) through a combined sewer system.

Once upon a time, the rank mixture poured straight into rivers, and everyone hoped nature would cleanse itself. In the 1950s, South Bend built a treatment plant and connected all of those old trunk lines to an interceptor pipe that snaked parallel to the river and conveyed flow downhill to the plant on the city’s northwest side. But in order to avoid swamping houses during rainfall, the new setup still allowed filthy water to spill past the interceptor into the river.

The federal Clean Water Act in 1970 took a first legislative step toward addressing the pollution and public health menace these combined sewer overflows (CSOs) create. During heavy storms, these events can spike the level of dangerous E. coli bacteria in a river more than 1,000 times higher than acceptable levels.

Dry weather overflows happen, too, when all the effluent teeming out of sinks, tubs and washing machines piles up at choke points where the water passes through smaller pipes. Gilot’s maintenance crew has cleared out everything from globs of bacon grease, tires and Christmas trees to a giant rootball he says looked like the Addams Family’s Cousin Itt.

Before EmNet fully installed its network of 115 sensors — called CSOnet — in the city’s 500 miles of subterranean tubes and tanks, one pair of city employees traversed South Bend in a pickup truck for 40 hours a week, lifting manhole covers to eyeball water levels and potential problems. Now they can “see” everything across the entire system through the CSOnet sensors at any time of day or night. The sensors transmit data through a series of nodes every five minutes, providing technicians with color-coded warnings of rising waters.

That power to sniff out and fix trouble under normal conditions is valuable in itself, Gilot says. It’s like getting two extra full-time maintenance men without adding to his payroll. But just as important, the sensors can talk to each other through a network devised by civil and electrical engineers from Notre Dame and Purdue University. They send pressure readings up through a cable to a radio box attached to the bottom of new composite fiberglass manhole covers that broadcasts data through the system. When needed, the sensors can work together to send “open” or “shut” messages to a series of nine “smart valves” and ensure that water flows optimally toward the plant during and after peak demand.

Storm intensity varies dramatically even in small cities. South Bend’s sewer may now adapt to conditions in real time, closing valves in low-flow sectors for use as storage while allowing a downpour to drain in others. Professor Michael Lemmon, who developed the network’s control algorithms, likens the system to the way demand-sensitive stoplights on Los Angeles freeways control the rate at which traffic enters during rush hour.

This decentralized, automated approach to flow management emerged about six years ago from Lemmon’s involvement in a multi-university program funded by DARPA, the research and development arm of the U.S. Department of Defense. The military saw great potential in such networks to monitor aircraft formations or troop movements, for instance.

“This was about embedding sensors in the world, and how to network those sensors in a way that allowed someone to obtain a global view of what was going on in ways we couldn’t really imagine before,” he says.

The next step was to find a large-scale civilian application that would have a significant social impact while making Notre Dame researchers more competitive for related federal grants. Lemmon and Jeff Talley, then a professor of civil engineering at Notre Dame, met with South Bend officials. The CSO problem fit perfectly. Using technology seed money from the state of Indiana, plus investments from the city and Notre Dame, the researchers began pilot tests in campus lakes and a drainage zone on the city’s southeast side. Eventually, Lemmon saw the need for a commercial partner to handle technology transfer to the city. EmNet was born.

Work crews dropped the last of the smart valves into the system in November. Greeley and Hansen, an independent engineering consultancy Gilot hired to review the system, has set a “conservative” estimate for CSO reduction at 23 percent, which is good news for many in the community, such as kayakers on the river’s East Race training course.

It also means a financial benefit to the city and its residents. To date, Gilot says, the city has spent “close to $6 million” to install CSOnet, but knocked an estimated $100 million to $120 million off the estimated half-billion dollars the city had expected to pay to bring its system up to federal and state standards over the next 20 years. He figures that accounts for 64 cents on residents’ monthly water bills, as opposed to the $12.85 per month people might have paid for the same benefit obtained by digging up streets to build in extra pipes and tanks.

Gilot says South Bend has lots more to do to modernize its sewers. He talks about storage tanks that can sit under porously surfaced parking lots and act like miniature primary treatment plants. He describes curb cuts that will direct stormwater toward rain gardens and refill aquifers. But he highly recommends CSOnet to other cities. American City & County magazine cited the project as one reason why in August it named Gilot its Public Works Leader of the Year. CSOnet was mentioned again when Notre Dame received the Larry A. Conrad Civic Service Award from the Indiana Association of Cities and Towns.

“We’ve gone through this one step at a time, and we’ve proved full-scale that there is a better answer on sewers,” Gilot says. “It’s not going to get you out of your whole long-term CSO control plan, but it’s a really smart tool to have in your toolbox as part of the solution.”

Lemmon says EmNet continues to be a technology partner. He serves on a team of scientists and engineers led by biology Professor David Lodge on the Notre Dame Environmental Change Initiative, one of the recipients of the second round of multimillion dollar Strategic Research Investment awards the University announced last spring. The ND initiative will use embedded sensors to monitor all kinds of ecological change.

EmNet’s Ruggaber says the company is profitable. It has equipment in Indiana’s four largest cities and is working with municipalities in Illinois and Ohio as well as in Washington D.C., Hoboken, New Jersey, and Manhattan. “We’ve turned the corner,” he says, which helps explain that confidence with which the Ruggabers bought their first home, right across the street from his boss, company founder and president Luis Montestruque ’04Ph.D. “And now you know that when people laugh at me for being a ‘poop engineer’ it’s a little more subtle than that.”