Used and abused as it’s been by Notre Dame students for 62 years, O’Shaughnessy’s Great Hall had an allure and charm in its early days that had faded over time. In 2013, the College of Arts and Letters decided to restore it, as much as possible, to its original state.

“The wood was in bad shape and we wanted to go through with a beautification project,” says Matt Fulcher, the college’s assistant director of facilities and academic space. “We wanted to reclaim its glory and beauty from when it was built instead of redoing it. Not a lot of places on campus have that opportunity.” 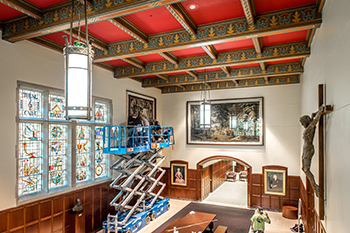 With the original 1953 blueprint in hand, Fulcher and his colleagues were able to restore the wood, walls and ceiling in 2014. But after looking again at their documentation, Fulcher noticed two missing tapestries that had once hung on the walls. Curious to learn what had become of them, he searched the classroom building’s basement but couldn’t find anything. “I asked the archives if they knew anything, and they didn’t,” he says. “And then I asked the Snite Museum.”

Deep in a storage closet, Snite employees found a pair of rolled-up rugs and told Fulcher he could come and look at them. When they were unrolled, Fulcher found the tapestries he was looking for.

The discovery came just in time. Recognizing the tapestries’ poor condition, he contracted Harold Mailand from Textile Conservatives in Indianapolis to inquire about what promised to be a difficult restoration job.

Mailand identified the origin of one tapestry as 17th century Belgium or Germany from its distinctive, plant-derived dye and stitching techniques. The tapestry also received a working name: The Mercury. It shows a picture of three men playing bagpipes in a field with two houses and an abundance of trees, bushes and cows.

The other tapestry, The Diana, is thought to be from 18th century France, also because of its stitching techniques. It portrays Apollo’s twin hunting dogs with a bow made by one of her Olympian brothers.

Mailand needed 12 months to restore both tapestries. He used a process called wefting, a type of weaving, and a special cleaning process to remove all the dirt and dust that accumulated from their years in the closet. He did not know how colorful the original tapestries were, but the work revitalized much of the red, blue, brown, black, white and green fibers.

Each tapestry weighs about 25 pounds. The Mercury, which hangs above the smaller corridor that leads into the heart of the building, is about 14 feet by 8 feet. To its right, the Diana is roughly 9 feet by 12 ½ feet. Fulcher says the tapestries were originally snapped onto the wall and tore near their tops because of their size and weight. To avoid repeating this mistake, Mailand designed supports for each to protect them for 100 years and encased them in oak shadow boxes stained to match the rest of the hall.

Little is known about how the tapestries came to Notre Dame. Fulcher said a picture exists of The Mercury hanging in the former Lemonnier Library, now Bond Hall. His lone clue on the back of The Diana is a tag with a purchase date of “11/27/1928,” but he does not know if that is when it came from Europe, when it was bought in the United States, or specifically when it might have been procured for Notre Dame. He’ll work with Snite curators and, potentially, the history department to learn more.

Regardless, the tapestries join the Great Hall’s stained glass windows, carved stone entryway, wood-paneled walls and large oak table as cherished pieces of Notre Dame history. They may be a late addition to the beautification project, but their unexpected restoration has revived O’Shaughnessy Hall’s original magic and beauty. 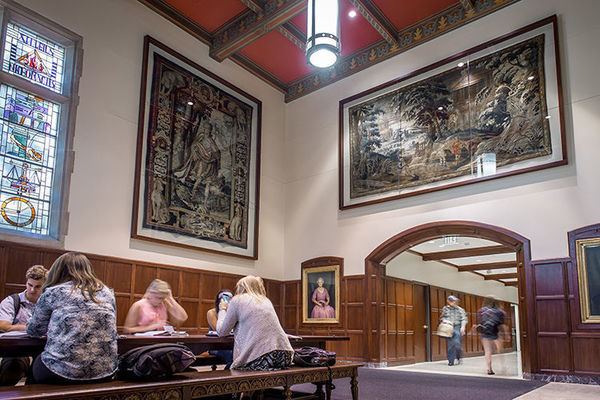