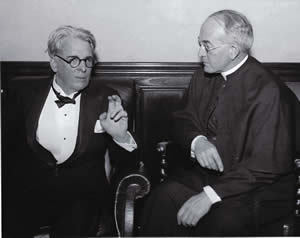 Though the financial recompense might not be comparable, drilling for oil and doing archival research share similarities. Both pursuits involve targeting a location, probing the territory for what you’re hoping to find, and either making a strike or moving on to another place to drill.

The paper chase of scholarship is much less messy and physically taxing but can be, in its way, just as frustrating. Never do you expect your professional prospecting to turn up a lost anecdote about your employer and a Nobel laureate.

The other day I was looking for information about Joyce Kilmer, the early 20th-century American poet, who plays a prominent role in a book I’m writing about Ireland and America. Upon learning he had ties to Notre Dame and that his most well-known poem, “Trees,” might have been inspired by a visit to the Grotto, I headed to the University Archives in the Hesburgh Library to see if I could find a paper trail to track him.

Several letters document his friendship with Rev. John W. Cavanaugh, CSC, and Rev. Charles O’Donnell, CSC, both previous presidents of Notre Dame. A Kilmer lecture trip to Notre Dame in 1916 — three years after “Trees” was written — receives attention. O’Donnell, himself an accomplished poet, even assembled a fascinating file of newspaper and magazine clippings about Kilmer’s death at age 31 while fighting in France during World War I.

One slim file in Cavanaugh’s presidential papers includes a few of his reminiscences, mentioning a New York dinner that Kilmer attended. But there are only passing references to him and nothing about “Trees.”

The next page, however, turns to another poet, William Butler Yeats, who also figures in my book, so I decided to keep reading. Yeats had spent several days at Notre Dame in January 1904, the year before Cavanaugh assumed the University presidency. The priest’s recollections are both charming and revealing about the Irish man of letters.

“Yeats was an inexhaustible source of delight,” Cavanaugh remembered. “I’ve never known anyone so forgetful of little details. Whenever it came time for his lecture in Washington Hall on the campus, he seized his portfolio and marched over only to find after he arrived on the stage that he had brought the wrong lecture or no lecture at all in an empty portfolio. This was constantly happening.

“Similarly he would go out into the cold winter weather without a hat and after four or five minutes he would remember that he was hatless and hurry back to his room to get a covering for his head. The number of experiences of this kind was almost endless.

“At last it came time for him to go away and as I bade him good-bye and waved to him as the automobile trundled on out of sight, I said to someone near me: ‘I wonder what he has forgotten now.’ Three minutes after as I still stood watching the departing guest, I saw the machine turn round about the graveyard and scurry back to the entrance to the Administration Building where I was standing. I waited leisurely, guessing what had happened.

“As he bounded out of the car and up the steps I said to him: ‘Well, Mr. Yeats, what have you forgotten now?’

“‘Upon my soul, Father,’ he said, ‘I’ve forgot my teeth.’ He dashed anxiously into his old bedroom and returned in a moment, triumphant and with his teeth.”

Though “forgetful of little details,” Yeats always seemed to find the right words for his poetry and prose, winning the Nobel Prize for Literature in 1923. And he made another triumphant lecture trip to Notre Dame in his later years.

A story like Father Cavanaugh’s, buried as it is in one file among many, probably won’t find its way into my book or do anything to advance Yeats scholarship. Yet from it you receive an enduring verbal snapshot of the artist as a person — and a good laugh in the process.

A wildcatter’s oil gusher it might not be, but occasionally an archival search in one direction takes the kind of golden turn you never regret.