On the Monday morning after commencement, after a night of spilling pitchers of beer on Finny’s dance floor, an evening of spraying champagne bottles outside the Main Building, a day of sitting, standing, sitting, standing and shuffling bleary-eyed from one commencement ceremony to the next, a week of doing our best to avoid the inevitable, and four of the greatest years of our lives, the Class of 2014 and I are emotionally, mentally, spiritually and, most literally, physically hungover. 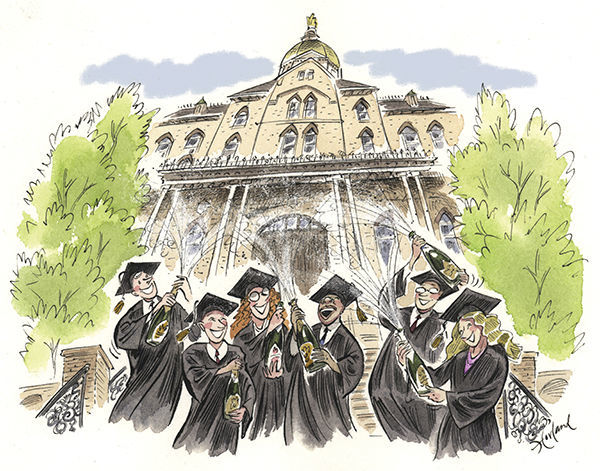 It began just before senior week, a collection of days and events meant to bring us together as a senior class for one more round of fun and freedom before facing the harsh reality that our time at Notre Dame as undergraduate students had finally come to an end. Most seniors I knew were finished with finals by Tuesday of the week prior, and so began their celebrations accordingly. I personally thought I was done Wednesday morning, but, in keeping with my grand academic tradition at this school, I had the day wrong and showed up to some other class’s final. I finished Thursday.

The planned events for senior week began Sunday, May 11, first with a trip to a White Sox game in Chicago, followed by a student-planned booze cruise somewhere in the city. By dual virtues of both being broke and not giving two shakes of a donkey’s tail about the White Sox, a good number of my friends and I stayed behind.

Every year for as long as history remembers (or at least since I was a freshman), one day of senior week has been dedicated to two all-day parties, which are not sponsored by the University. One is for senior guys, DudeFest, and one is for senior girls, BabeTostal. Because it’s a day of frivolity and partying, it must be early enough in the week that the day doesn’t shift into sobbing and heartfelt remembrances. So Tuesday morning we filed to our segregated soirees. I didn’t attend BabeTostal, but I heard it was a day of celebratory champagne and hard cider, rounds of flip cup and an all-around positive bonding experience.

At DudeFest, the occasion was a bit more savage. 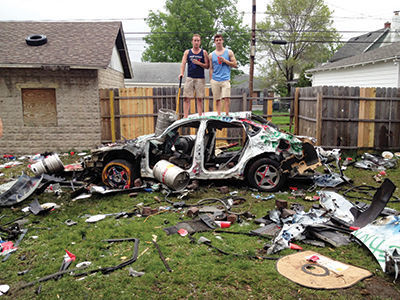 There were kegs scattered around a massive backyard; we sipped whiskey finer than has ever touched collegiate lips; we puffed the cigars that had been distributed to all — and that was the normal stuff. When I walked into the party, it was hard to miss the junkyard car already being smashed to bits by men who felt the need to prove their strength with a sledgehammer at 11 a.m.

If inebriated kids smashing a car with hammers in a week designed to make us feel like we have no responsibilities sounds dangerous to you, you’re correct. But after a smaller hammer slipped out of a kid’s hand, glanced off the windshield and missed somebody’s face by a few inches, that settled down.

The day devolved, to everyone’s delight, into an hours-long mud-wrestling competition. The tone of the matches ranged from friends fighting in a friendly manner; twin brothers fighting with a little more edge; guys with a grudge trying to hide that they were trying to hurt each other; and total strangers who just wanted to get punched in the face once before college ended. Off to the side, future professional athletes competed to see who could throw an empty keg over their head the farthest. There’s no deeper meaning I can get out of this kind of stuff; sometimes it’s fun to just have fun, even if it’s brutish and maybe a little dangerous.

One of the strange things about senior week was realizing how many people I didn’t know in my own class. We all shared some overarching, communal experience, but sometimes we only discovered that bond when watching two strangers beat on each other in the mud.

In the end, a number of girls showed up from the other party, and DudeFest tamed in time for some very lenient cops to politely ask everyone to leave.

Some of the events of the week fell under the category of doing stuff that grown-ups do and trying to have fun doing it. The best example was the Commencement Ball on Wednesday night, an event involving dressing up all nice-like and going to a banquet hall and dancing and overpaying for drinks and stuff. 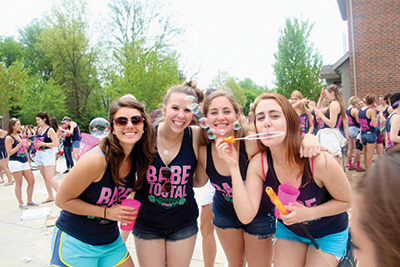 It wasn’t really my cup of tea. But it was interesting. For one thing, it’s traditionally referred to as the “Breakup Ball,” thanks to the high number of couples that finally call it quits at the dance. As none of my close friends seemed to be in danger of getting the ax, though at least one looked a bit nervous, we decided to have a little fun with it. For every crying couple, we took a drink.

It turns out the joke was on me, as not many breakups happened and most people stayed happy and together for the night.

Another event that made us realize life is a little different as adults came on Tuesday night with an evening of bowling, go-karts and miniature golf. While at the alley, we figured out that in the real, adult world, it’s not quite as socially acceptable to drink to your heart’s content at a nice bowling alley with real, adult friends. Bummer. But, as some older siblings had reminded us, one of the offshoots of life with jobs is you’re able to afford to do things like bowling without having to count out quarters and dimes beforehand. Maybe adulthood won’t be so bad.

On Monday, May 12, we had kicked off the week with senior Mass at the Basilica of the Sacred Heart. I had never had much of a connection to the basilica, as I’d always preferred the intimacy and casual feel of dorm Masses. At a dorm Mass, you’re on a first-name basis with the priest, you know everyone in the congregation, you can come in sweatpants and you can leave your bed about three minutes before the service starts. It feels like a Mass just for you, because in some ways it is.

At the basilica, you lose that feeling, and I’d never felt quite comfortable there. After the Gospel, though, Father Peter Rocca, CSC, ’70, ’73M.A., the basilica’s rector, gave a sermon on just how important the physical church is as a central place of worship at the University, serving as a beacon for all those at Notre Dame who are drawn to prayer. As he explained the significance of the “God, Country, Notre Dame” inscription over the east door, memorializing all the fallen soldiers of World War I and standing as a call to action for all Notre Dame men and women, I began to understand the draw to that beautiful building.

As deeply spiritual an experience as the Mass was, there was no fountain of tears afterward, unlike the second religious gathering of the week, the senior trip to the Grotto on Thursday night. Hundreds of seniors huddled together, protecting their candles from a chilling wind, as various Notre Dame choirs belted out hymns, which led into readings and talks from students and University president Father John Jenkins, CSC, ’76, ’78M.A. The most memorable moment came from the young rector of Keough Hall, Father Pat Reidy. CSC, ’08, ’13M.Div., who was ordained a priest just a few weeks prior. He talked about the tray he stole from the dining hall and finally returned years later. His passion in speaking of Notre Dame’s impact on his life struck a chord with the whole crowd. It was the first outpouring of tears I’d seen during senior week, and I did some hard blinking myself. That night, standing together in candlelight, a wave of love, nostalgia and fear washed over us and spared not even the most cynical of the senior class.

Over the course of the week I took to joking “I’ll never see you again” to everyone I said goodbye to, whether it was bye for an hour or a true, extended farewell. But as the week wore on, those goodbyes got more and more difficult, and the “never see you again” gag became very real. It struck me more than once that there were some people I likely will never see again. What an odd feeling. 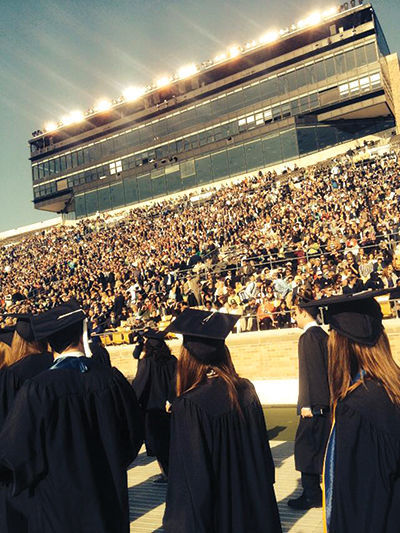 Every senior says his or her goodbyes in a uniquely personal way. On Monday evening of senior week, my friends and I returned to the beginning, to the dorm. One final Zahm tradition required us to pour beer on ourselves, and it would have gone great had some idiot not set off a fire extinguisher and, by extension, the fire alarm. And so we left Zahm for the last time — sprinting out the door, covered in beer, wearing only our boxers. I could not have planned a greater farewell to the dorm.

Though the power had been out in downtown South Bend since Thursday, Finny’s managed to regain power Sunday night after graduation in time for us all to shuttle over after all the bottles of champagne had been popped on the steps of Main Building. We got one more “Walking on Broken Glass,” one more “White Houses,” one more “Fat Bottomed Girls,” one more “Piano Man,” and then the lights came on and the music shut off. But nobody left. Nobody could leave. After four years, after senior week, after commencement, everybody knew that leaving Finny’s really meant the end, so nobody moved. The music came back on, and everyone stayed, with the lights on and bar shut down, for another 45 minutes, before heading outside. And so we stood there, covered in sweat, tears and beer, hugging and trying not to say goodbye, culminating in what one friend described as “the biggest group cry session I’ve ever seen.”

The next morning, May 19, in our off-campus house, all that remained were the hardest goodbyes  to Notre Dame and to our closest friends. It took two hours for our first departing roommate to get out the door. Each time he made the move to leave, we’d pull out another stupid story from the four-year archive of our friendship. Senior week had culminated into one last reminiscence among a bunch of friends who were trying not to think about what comes next, trying not to say goodbye, trying to hold on, for one last moment, to what we’d had for four years.

In the end, we said goodbye to each other, to our college careers and to this place. It won’t be the same when we come back, and some people we may never see again, but we took away from senior week that we’ll always have each other to sit around, shoot the breeze and remember Notre Dame together. That’s as good an aspirin for this emotional hangover as any I know.

Kevin Noonan was this magazine’s summer 2013 intern. In August he will begin an internship at Variety in Los Angeles.