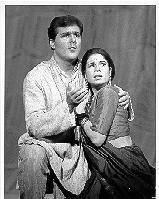 In 1993 Raymond Very, Notre Dame class of 1983, made the startling leap from manager of sales training for Fischer Scientific International, Inc., to apprentice tenor with the Houston Opera Studio. Since then, the man who had no formal voice training has established himself as an up-and-coming tenor in the world of professional opera. He has performed in New York, Chicago, San Francisco, Houston, Oslo and Munich. Next year he will debut with New York’s Metropolitan Opera Company. Not bad for a guy who had never even seen an opera until 1991 when he tried out for the Pittsburgh Opera chorus at the urging of friends who had heard him sing. At Notre Dame, the closest the marketing major came to opera was as Don Quixote in The Man of LaMancha his senior year. The roles Very enjoys most these days are in new operas. With the old standards creativity is more circumscribed, he says, although there is always room for interpretation. “But if the piece has never been performed you can create the character totally.” This July Very has his first opportunity to appear with his wife, Laura Knoop Very, who also is a professional opera singer. They each have roles in Tales of Hoffmann at Catholic University’s Summer Opera Theater.