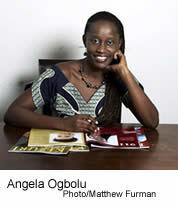 Pop into Barnes & Noble, grab a latte and browse the magazine shelves. In the midst of the hundreds of publications that survived the review process and got the thumbs-up for display space in the big-box bookstore, you might spot Kitu Kizuri. If it’s not sold out.

Ogbolu, 32, who came from Nairobi, Kenya, to attend Notre Dame, lives in Pennsylvania with her Nigerian-born physician husband. In 2003, the same year she became a naturalized U.S. citizen, Ogbolu quit her job at Merrill Lynch when she gave birth to the couple’s first child.

“I was truly lost,” she says. She had no extended family nearby to offer support—"no one to bring me soup," as she puts it.

She had read magazines targeted to an African-America audience, but none of them addressed her situation, “the unique and specific cultural conflicts and issues that African immigrant women face.” In other words, she says, “How do we navigate America?”

How, for instance, can an immigrant woman pass along an African cultural identity to her children, who must contend with racism in America? How does she negotiate the corporate world? What about those facing domestic abuse or divorce or HIV? Or those navigating the dating scene or still supporting parents in Africa?

Unable to find any magazine focusing on those questions, Ogbolu launched Kitu Kizuri—Kiswahili for “something good or beautiful”—on the web in November 2006 (www.kitukizuri.com). The first quarterly print issue came out in April 2007.

Printing a magazine is expensive, but Ogbolu managed one major cost-cutting move: the editorial team works for free. “It’s an all-volunteer dedicated staff of African-American women who are passionate about what we are doing,” she says. “We are very grass-roots.”

Kitu Kizuri targets its diverse readership by making sure each issue features several women who come from different African countries. Its topical stories also rely heavily on first-person examples. “We don’t sit and say ‘raising children in America is a big issue.’ Instead, we look for two women who we can profile: one whose kids have turned out great and one whose kids haven’t.”

Such pieces are leavened with the upbeat, as well. “We cannot ignore the trials and difficulties we are having,” Ogbolu says, but articles also celebrate the professional and creative accomplishments of African immigrant women.

Carol Schaal is managing editor and web editor of this magazine.