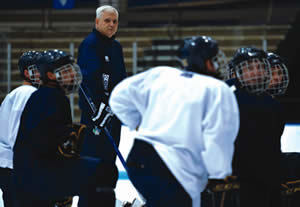 Hanging next to Notre Dame hockey coach Jeff Jackson’s desk are four picture frames. Three are filled with a picture of each of his NCAA national championship teams from Lake Superior State University being honored at the White House. The last holds a piece of paper that reads, “Place Picture Here.”

“We have three presidents up there,” says Jackson. “I’m looking for the fourth.”

After almost a decade away from the college game, Jackson returned in 2005 to guide a floundering Notre Dame program to new levels of success. Before the Jackson era, the Fighting Irish had never made it past the first round of the NCAA tournament. Jackson, now first among active Division 1 college coaches in winning percentage and ninth in total wins, has already led the team to its first-ever No. 1 ranking in 2007 and an appearance in the NCAA finals in 2008.

None of it satisfies the hard-nosed coach.

“That stuff doesn’t matter to me,” says Jackson. “They had the No. 1 flag blowing out the window, and it’s nice to be recognized. It’ll be nicer when we’re recognized at the end of the year for that.”

Growing up in the Detroit suburb of Roseville, Michigan, Jackson’s dream was to be a student at Notre Dame. He played competitive hockey and hoped one day to skate for an Irish squad that had made the jump from club sport to varsity sport in 1968, when Jackson was 13. But his father’s early death left his mother unable to afford Notre Dame’s tuition. Jackson ended up at Michigan State, where he received a scholarship to play on the ice.

Hopes for a stellar hockey career came to a halt when Jackson broke his ankle in the beginning of his sophomore year. “They put a pin in my ankle, and there was no way I was going to play hockey anymore,” he says.

Coaching was the next best thing. At age 20, he began his career by coaching a midget major team consisting of the best 15- and 16-year-old hockey players in the Detroit area. From there he went to the University of Michigan, where he served as a coaching assistant.

It was through his connections in Ann Arbor that Jackson first made a name for himself in college hockey. Catching the eye of Lake Superior State head coach Frank Anzalone, Jackson was named assistant coach at the promising hockey program in Michigan’s Upper Peninsula.

During his 10 years at Lake Superior State, he helped his team win the national championship as an assistant coach in 1988, and won championships in 1992 and ’94 as the Lakers’ head coach. With the program he had helped build, a fourth run seemed attainable, but the coach decided to shift gears.

“The only thing that could’ve gotten me to leave Lake Superior was a unique opportunity,” says Jackson. “USA Hockey was, for the first time ever, going to hire a national coach.”

The job meant working with the country’s best under-18 players, a challenge Jackson couldn’t ignore. He returned to Ann Arbor in 1996, this time as coach and senior director of USA Hockey’s National Team Development Program.

Over four years, the program trained almost 50 future players for the National Hockey League. Jackson, however, decided in 2000 to again try something new, this time heading further north. He signed on as coach of the Guelph Storm, an under-20 hockey team in the Ontario Hockey League, where he again guided his team to an appearance in a championship tournament, the OHL Memorial Cup.

Heading for the pros

One coaching horizon remained. “I decided I was going to take a shot at pro hockey,” says Jackson. In 2003, he returned to the United States to serve as an assistant coach for the struggling New York Islanders. “It was a great opportunity for me. We made the playoffs the one year I was there, and then the lockout hit.”

Because of a labor dispute, the NHL cancelled its 2004-05 season, a first in the sport’s history. Unsure of the league’s future, Jackson began scouting for a minor league team, but he had his heart set on something else.

“I figured I’d probably like to go back to college hockey, but I wasn’t going to go just anywhere,” he says.

Notre Dame wasn’t “just anywhere,” and the head coaching position opened up in 2005. It was the right fit in many ways: the type of program Jackson had been used to working with, one with a low morale after turning in a frightful 5-27-6 record in its 2004 season. It was a team he again felt had the potential to turn itself around and win championships. More important, it was part of a school whose values Jackson felt closely matched his own.

“The value of the education is second to none,” he reasons. “And I thought it would be an outstanding place to develop players.” It didn’t hurt that Notre Dame allowed Jackson to bring in a member of Lake Superior’s 1992 and ’94 championship coaching staffs. His former assistant, Paul Pooley, decided to leave the head coaching job at Providence College after 11 seasons to again work with Jackson as Notre Dame’s associate head coach.

“It just felt like riding a bike again or, in the winter time, putting your gloves on,” says Pooley. “They fit. It was just like this is where I need to be right now, working with him.”

They didn’t exactly pick up where they’d left off. “We had to change the internal culture here,” says Jackson. “And in reality, it was a wrestling match here for my first six months. I had to sit guys out. I suspended guys for breaking curfew. We even had a player leave.”

By Christmas 2005, the hockey program had a losing record and major obstacles to climb over if they wanted to win. Team chemistry was an obvious problem, and Jackson says he knew the players needed to confront one another about issues on and off the ice, a step they had been hesitant to take. The tensions culminated one night during a team-building activity, a memory Jackson holds as one of his fondest moments at Notre Dame.

“They finally snapped, and they started challenging each other and started admitting some of their weaknesses,” says Jackson. “That’s the true sign of a family. That was the night things turned around.”

The Irish finished eighth in the 12-team Central Collegiate Hockey Association standings that year. In year two the freshmen arrived unsure of what to expect from the highly respected, highly regimented Jackson. “It was tough because of his personality, until you get to know him,” says senior captain Ryan Thang. “It definitely gave some question marks going into the season.”

Jackson provided answers for the stellar freshmen players, who received significant playing time in their first year. He guided the team to the top of the conference, winning both the CCHA regular season and tournament titles, and a No. 1 national ranking. The team lost to Jackson’s alma mater, Michigan State, in the NCAA Midwest Regional, one step shy of the Frozen Four. Jackson was named conference and national coach of the year.

But the Irish were just getting started. Though they struggled late in the 2007-08 season, they earned a NCAA bid as a No. 4 seed in the 16-team tournament. Hoping to advance past the second round this time, the Irish did that and more, skating past Michigan State and into the Frozen Four for the first time in history.

Again the underdog, the Irish faced top-seeded rival Michigan in the semifinals, coming out on top with a 5-4 overtime win. Jackson and the Irish were one step away from being national champions. But Boston College beat them to it, outscoring them 4-1 in the title game.

“To just get so close and let it go is definitely the most disappointing part of my career so far,” says senior Kyle Lawson. “Once you taste it, you just want more.”

Expectations soared, and the hockey program was suddenly a source of campus pride. As a No. 1 seed in the NCAA tournament last spring, winning a first-ever national championship seemed even more likely as the Irish prepared to take on a school not many had even heard of. Instead, Minnesota’s Bemidji State became a name no true Notre Dame hockey fan will ever forget. The Beavers shocked the Irish 5-1 in the first round. The underdog had again prevailed, but this time Notre Dame was on the wrong side of the upset.

“It’s tough. The year before we were the underdog, and we went all the way to the finals,” says Lawson. “Then we had the same thing happen to us. It’s a funny thing, but I guess that’s why you play.”

“We have to lose in order to learn how to win,” says Jackson. “You have to go through it enough to figure it out.”

Jackson says he’s still learning after 30 years in coaching. He says he strives for the three components of excellence he heard Notre Dame Law Professor Tex Dutile define at a faculty dinner: consistency, balance and humility.

“I want our players to walk away from this experience better people and better hockey players,” says Jackson. “Right now, I want us to continue to be balanced and consistently in the hunt. If we’re there long enough, we’re gonna win one.”