I stare down at my phone, puzzled by the text. Activity swirls around me as I stand in my good friend Michelle Melland’s kitchen. 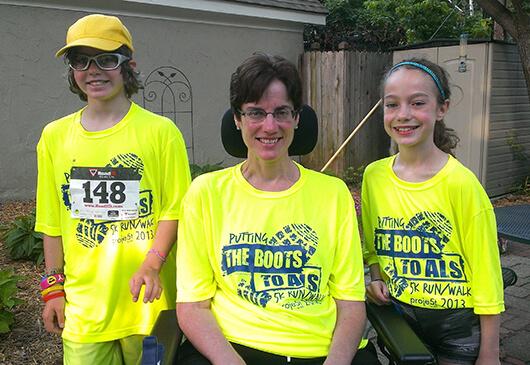 I check the sender’s name and slowly turn around. Michelle ’88 lies eight feet away in a hospital bed, breathing through a tube inserted into a hole in her trachea and connected to a nearby ventilator. She raises her eyebrows at me, enjoying my surprise at her text.

Michelle is checking on the progress of an activity I am organizing with two other close friends, Sue Pusek ’88 and Margo Kirchner ’88. We’re trying to teach Hayley and Sydney, Michelle’s 13-year-old twins, how to sew.

Michelle, Margo and I roomed together in Badin Hall as freshmen at Notre Dame. Sue shared a suite a few doors down with Catherine (Nonnenkamp) Lindner, Julia Merkel and Cheryl Mott, all ’88 grads. We lost touch with Cheryl, but the rest of us stayed in sporadic contact in the decades following graduation.

In September 2011, Michelle reached out to us by email, sharing the devastating news that she had been diagnosed with amyotrophic lateral sclerosis (ALS), a degenerative neuromuscular disease commonly known as Lou Gehrig’s Disease. At the time, Michelle’s symptoms — muscle cramps, fatigue, numbness — were fairly manageable, but her condition was deteriorating. In the summer of 2012, a group of us and our families converged on a vacation rental in Frisco, Colorado, where we reconnected with Michelle and her then-nine-year-old daughters.

We began visiting the Mellands at their home in Kansas City every six months or so. In the beginning we were tourists. Using a wheelchair, Michelle and her husband, Paul, took us to their favorite eateries, museums and sights. Then we started to spend more time with Hayley and Sydney so they could get to know us and, by extension, their mom — as we had known her at Notre Dame. We made over the girls’ bedrooms, we cheered at their volleyball games, we took them out to eat and we hosted sleepovers in our hotel rooms.

By the spring of 2014, Michelle was three years into the typical ALS prognosis of a three- to five-year lifespan. As breathing on her own became increasingly difficult, Michelle rethought her original decision not to pursue life-extending measures and underwent a tracheostomy, which allows her to breathe by way of a ventilator. The procedure robbed her of her voice, but thanks to benefits she receives from having served in the army, she was able to purchase eye-tracking technology that allows her to select letters with her eyes and “type” words phrases, and sentences. These appear on a DynaVox EyeMax screen that hovers above her bed and are spoken aloud by the system’s computer.

In August 2014, the five of us visited Michelle. It was the summer of the ALS Ice Bucket Challenge, a fundraising trend that went viral and featured everyone from ordinary people to celebrities getting soaked and challenging others to go under the bucket to raise money for ALS research. Paul, who had once organized a flash mob in Nebraska to serenade Michelle on her birthday, did not disappoint. More than 100 people showed up to surprise her, taking the challenge in their driveway while Michelle watched from her motorized wheelchair, her breathing tube connected to a portable respirator. When it was the ND roommates’ turn, we huddled together a safe distance from Michelle while Paul and his fellow Knights of Columbus doused us with several buckets of icy water. The event raised nearly $3,000 for a local ALS chapter. Michelle later called it one of the best days she’d had in months.

About two years ago, our visits became more purposeful. Michelle asked us to come in twos and threes. It made it easier for her to interact with us, she said. She also asked if we’d consider supervising a specific task with the girls during each visit. Margo and Catherine tackled cooking lessons in early 2016. Michelle and Paul sent them a list of 20 dishes they wanted the twins to learn to make before they left for college. When Margo and Catherine arrived one morning to walk the twins through breakfast prep, Michelle was waiting for them, dressed and in her motorized wheelchair to be a part of the experience.

Three of us visited just after the presidential election in November 2016 to take on the sewing lesson. Before my plane departed the Austin airport, Michelle texted, “Whatever you do, don’t bring up the election in front of Paul,” referring to our opposing political views. “Sounds like a dare,” I typed back. I imagined her raising an eyebrow.

The twins eventually came around to the sewing activity. We provided store-bought kits and fabric bundles and demonstrated various stitches and their uses. Sydney, the quiet gamer, became enthusiastic once she realized sewing skills would elevate her costumes for Planet Comicon, Kansas City’s largest comic book convention. Hayley, a fashion-forward crafter, carefully considered fabric choices and stitch patterns to create the most eye-catching stitch sampler.

As our visits became more focused, Michelle grew increasingly determined about her own life. “For about the first year after going on the ventilator, I checked out in a pretty big way,” she wrote earlier this year. “I didn’t think it was worth starting up anything meaningful because I was expecting to die at any moment. I finally realized after a year of stable health that I just might be around for quite a while, so I’d better get moving.”

The result is her blog, “Book Thoughts From Bed.” On its home page Michelle writes, “This blog is what happens when a woman who is productive by nature gets confined to a hospital bed. I want to provide readers with some book recommendations and I hope they do the same for me.” In reality, the blog has become so much more, fostering a way for Michelle to engage in a dialogue with the outside world.

She posts weekly reviews and has even started a monthly virtual book group. Mixing fiction with nonfiction, she often chooses books that have been out for a couple of years or more, in part because she’s making up for lost time when, as a full-time working mom, she had little spare time or energy to read. This past May, she posted about The Unlikely Pilgrimage of Harold Fry, a 2013 novel by Rachel Joyce that she and her followers had read for April. “It’s a well written downer,” she wrote after describing the novel’s plot and sharing her thoughts about Joyce’s style. “I spent last Saturday trying to get through it. The weather was gloomy, a few ants from the patio found their way into my bed and I was reading “The Unlikely Pilgrimage of Harold Fry”. Of the three, the rain and ants crawling on me were the least upsetting. I was kind of a mess by the end of the afternoon. It took 3 episodes of The Big Bang Theory to cheer me back up.” Ten people posted comments, and Michelle responded, generating a lively back-and-forth about Joyce’s book.

“I look like someone who might be cognitively impaired,” Michelle wrote me months ago. “I think my blog reassures some of my friends and family that I still have a good brain and a decent personality. It reassures me, too.” 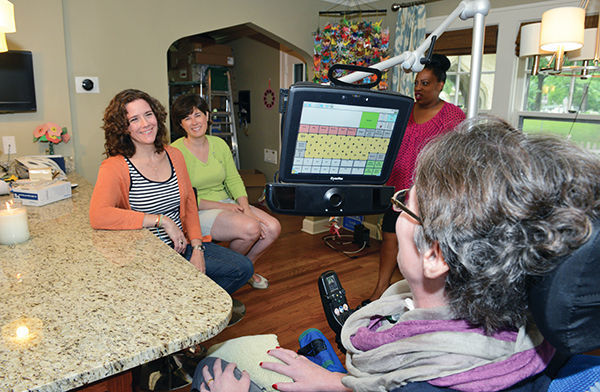 Michelle estimates that building the website took 10 times longer than it should have because, as she likes to point out, “I built it with my eyes, y’all!” In the first year or so after receiving the DynaVox system, minutes would tick by as she trained her eyes on each letter, painstakingly communicating with the technology to form sentences. Today, Michelle’s eyes seem to race across the keyboard above her bed, and she’s figured out that she can text someone in the next room so that she’s part of the conversation even when she’s physically absent. Resizing photos and similar tasks, she writes, remain “really hard and frustrating. But it makes the accomplishment even more satisfying.”

Emboldened by her successes and buoyed by positive response to her book reviews, she approached her former employer, an outsourced call center. Today, in addition to her weekly book reviews, she writes bi-weekly posts for the company’s blog about topics related to call centers, customer experience and outsourcing.

Recently a reporter for the Kansas City Star profiled Michelle and her blog for the newspaper. The article brought increased traffic to her site, which more than quadrupled its subscribers. It also led to requests from authors who want her to review their books, and even a new client, for whom she wrote a white paper.

Describing that complex assignment as “fun,” she’s eager to write more. This makes complete sense to me. After all, this is the same woman whose keen grasp of foreign and domestic policy saved me from failing our International Relations class freshman year.

“I’m a little worried about people’s reaction to my limitations,” she writes of her desire to find more clients. “But really I have nothing to lose.”

Michelle has always been a positive person, so this productive “next chapter” of her life with ALS fits her upbeat, can-do personality. Statistics on the lifespan of ALS patients on tracheostomy ventilation are all over the map, but it’s not uncommon for someone to extend his or her life by a decade or more. It’s been more than three years for Michelle so far. We never discuss this with her, but that doesn’t mean we don’t think about it. I used to sob every time my plane took off from Kansas City, turning my face to the window to avoid interaction. These days, I cry less, if at all. In fact, I’m more likely to settle back into my seat and open up a good book recommended by a dear friend.

Alison Macor is the author of the new biography Rewrite Man: The Life and Career of Screenwriter Warren Skaaren (UT Press). She lives in Austin, Texas.