Every time a taxi makes a short trip from the Notre Dame campus to Eddy Street Commons, it drops off more than just passengers; it also leaves behind a tiny amount of pollution that lingers in the air, sometimes for years. Multiply that by the thousands of such rides that happen during any given academic year, and the cumulative effect is significant.

Freshman Jake Drysdale wants to do something about that. The 18-year-old from St. Louis brought something a little unusual with him to South Bend for his first year — prototypes for nanocoated banner signs that actually clean the air in their vicinity. The nanocoating technology accelerates the process that breaks down pollutants to fractions of a second, rather than years, decades or even centuries. He estimates that hanging 100 of these signs in the parking lots around Notre Dame Stadium would offset the environmental impact of the equivalent of more than 80,000 cab rides a year from the Notre Dame Avenue circle to Eddy Street, about three-tenths of a mile. 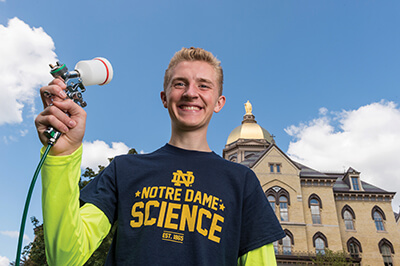 For Jake, the idea is far from a whim; it’s the logical next step in a young career that already includes a successful start-up venture, Nanotech Smart Signs, the only company in the world that coats and sells signs using the PURETi technology. Jake is the youngest person in the world to be lab-certified in PURETi, through which a nanoscale catalyst of titanium dioxide is applied to the surface of ordinary vinyl signs to speed up the natural process of photocatalytic oxidation. That process helps eliminate greenhouse gases and car exhaust pollutants like nitrogen oxide and sulfur dioxide from the air, and bacteria, mold and fungus from the surface of the sign. The nanocoating, which is applied with a spray compressor, dries in minutes, cures in days and can last for five years.

“Climate change is one of the great challenges facing my generation,” Jake says about his interest in pursuing solutions to environmental problems. “When my parents were born, there were 4 billion people in the world. By the time I graduate from Notre Dame in 2020, there will be 8 billion. So one of the great technological challenges of our time will be to create a sustainable home for a population that has doubled in just one generation.”

Jake’s interest in clean air was first piqued at age 8 while on a family hiking trip in Glacier National Park, where he learned that all of the glaciers in the Montana park were expected to melt by 2030. Troubled by this prospect, he set out to understand what was happening. His first deep dive into the subject was a grade school science fair project complete with field research, ice experiments and independent study of renewable energy technologies. A couple years later, while the family was living in London, something else caught Jake’s eye on his walk to school — a group of scientists spraying a liquid on a large concrete wall. When 10-year-old Jake asked what they were doing, they told him the solution contained nanotechnology to reduce pollution from car exhaust. The idea stuck with him, and after further research he set out to make something happen.

Jake founded Nanotech Smart Signs while a senior at St. Louis Priory School in Creve Coeur, Missouri. Thanks to his initiative, Priory became the first school in the country to have the signs on its campus. He now hopes to give Notre Dame that distinction among institutions of higher education.

In many ways, Jake’s arrival at Notre Dame is the natural culmination of a multitude of his lifelong passions — science, entrepreneurship, service . . . and Notre Dame.

“Notre Dame has always been with me, every step of the way,” Jake says, tracing his connections to the University back to before his birth — his parents met in South Bend while his mom, Heidi, was a student at Saint Mary’s College, and his dad, Doug ’92J.D., ’09LL.M., was in law school. “My parents raised me with the values of Notre Dame: faith, service, passion, purpose, effort and attitude. And it wasn’t just talk.”

Together, the family has participated in a number of alumni service trips, including one in 2006 when Jake was a third-grader to post-Hurricane Katrina New Orleans, where they joined alumni and friends from Notre Dame and Louisiana State University to rebuild a neighborhood and fix a damaged playground. “Working together to help others made us closer as a community and closer as a family,” Jake says. “I truly feel inspired by the spirit of Notre Dame.”

“He has always had a love of learning and an intellectual curiosity,” his father says. “And it’s not just knowledge, which is essential for progress, but it’s taking it and doing something that matters that helps others and makes the world better. In my mind, that’s the essence of Notre Dame — not just a place to learn, but a place to do.”

One of the things Jake is most excited to do is get into the lab. His high school senior thesis, “Is it Too Late to Act on Climate Change?,” references the work of Notre Dame science professor Prashant Kamat, who has gained national attention for his groundbreaking research on “solar paint” that uses semiconducting nanoparticles to produce energy. This is the type of science Jake says he would love to be a part of advancing and a huge part of why he chose Notre Dame.

“Making signs that clean the air is something I can do right now. I hope this makes the world better in some small way today,” he says. “At Notre Dame, I hope to do more.”